The next day, Tuesday 23rd February, for various reasons I decided not to go out with the group (along with three others). Instead, I spent the morning being entertained by habituated baboons on the beach.    All of baboon life was there! 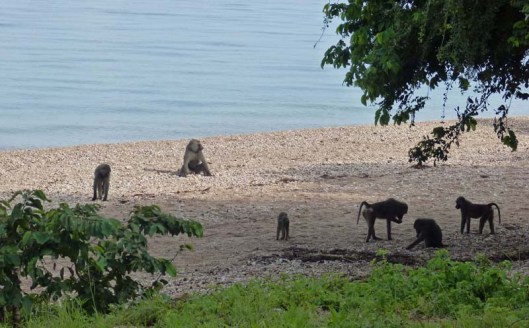 Scrabbling for crumbs left by picnickers the previous day! 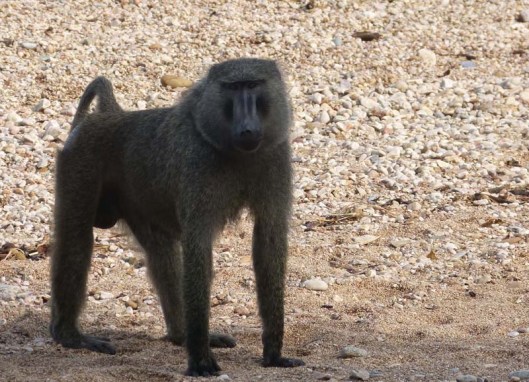 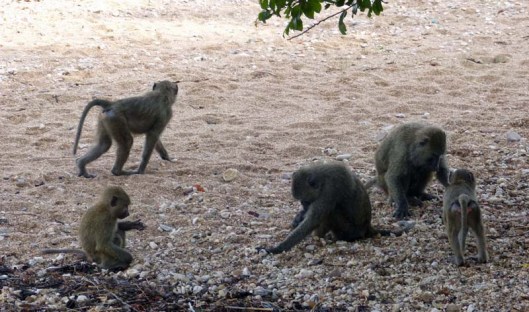 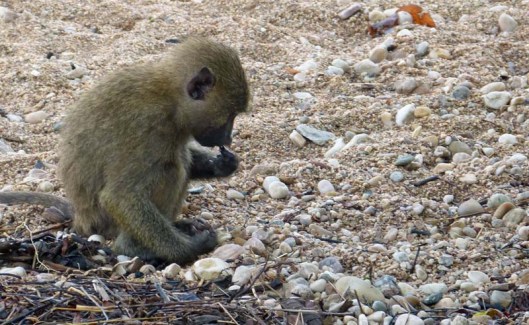 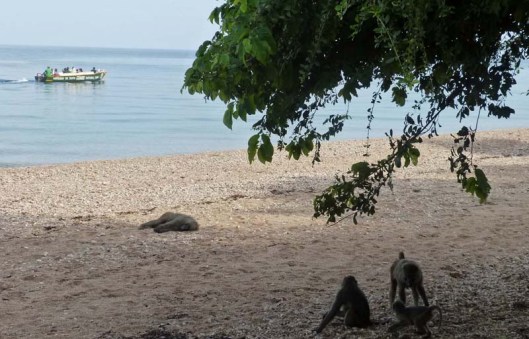 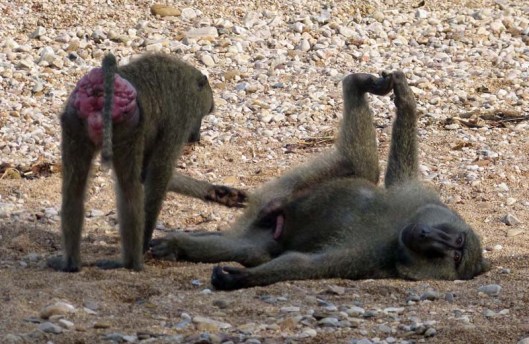 She groomed him for 20 minutes in the hope of his service.  But she’s past her best, and in due course he told her to get lost. 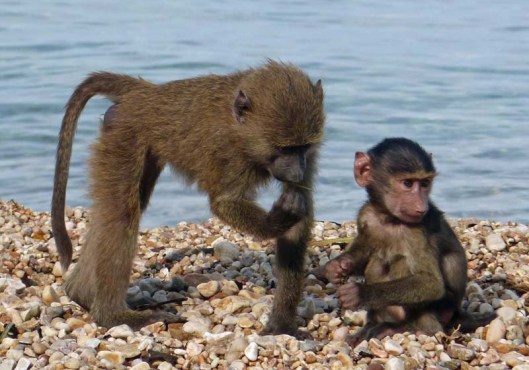 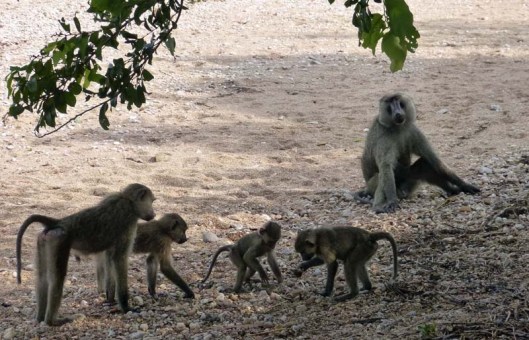 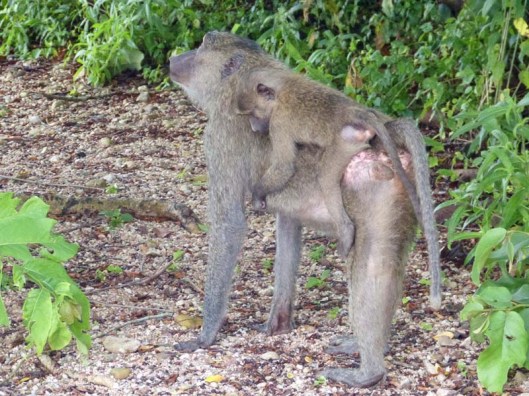 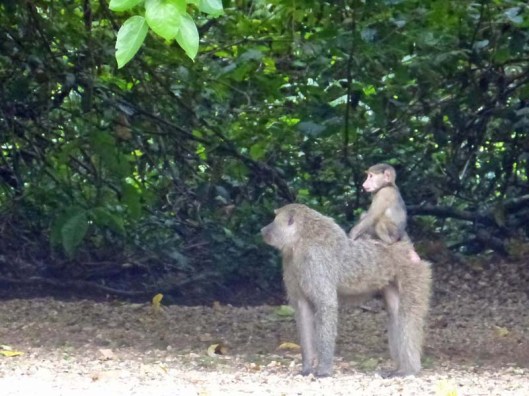 Do not leave washed tablecloths to the mercies of the wildlife!

Lake Tanganyika is tidal and has waves, it is so deep and big.

When the others came back late morning, we all went indoors, upstairs to the dining room, to have drinks and snacks.  Somehow a big male baboon got into the building, up the stairs and onto the table, snatching crisps and biscuits, all in a matter of a few seconds.  I learned later that this one was known to be a thief, son of a mother thief.

We went outside, and watched the antics of the troop, all members of which had moved from the beach to the main building. 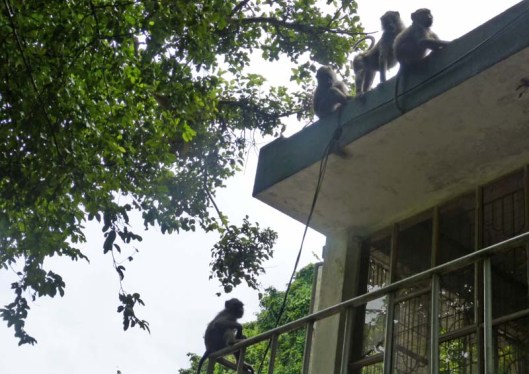 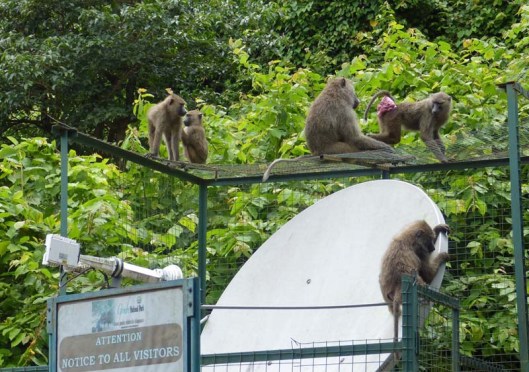 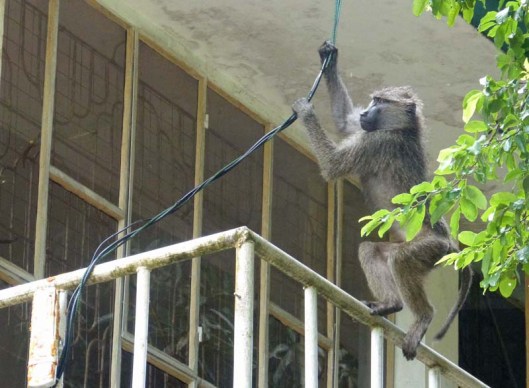 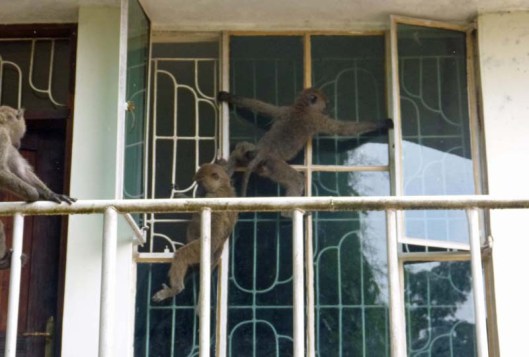 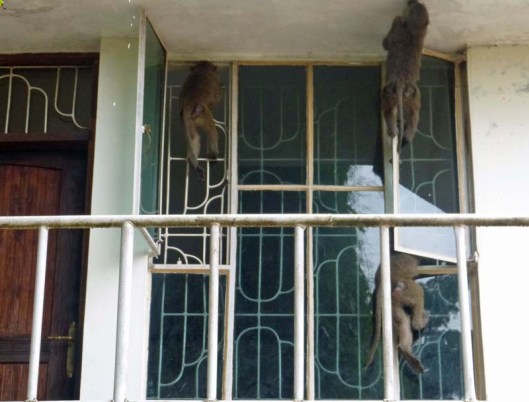 Despite the inside grill, this young baboon got in – to the bedroom of one of us!

Late afternoon, we were very pleased to make the acquaintance of Dr Anthony Collins, who had worked continuously at Gombe since 1967, working on a study of these very Olive baboons (to give them their full title).  We took full advantage of the opportunity to ply him with questions about Gombe.

The following day, our last, for the trek we were down to three plus organiser, due to injury, illness and uxorial concern.  This meant that if, while we were out, I were to feel that I could not carry on at some point there would be a spare local guide to accompany me back. (One is not allowed out trekking without this local expertise and experience.)  The aim was to get to ‘Jane’s Peak’, where, an advance party had told us, had just been seen some chimps. 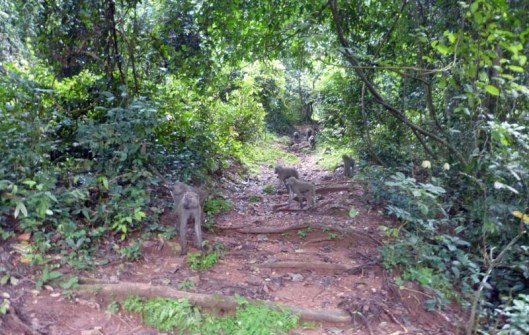 The start of our walk

On the way up, Dr Collins joined us.  I was very pleased to make it to the Peak, but sadly we saw no chimps.  Our local guides, who had been scampering around and calling to each other, told us that there were nevertheless some to be seen, but quite a long trek further on.  Exhausted and sweaty, I decided not to continue.  However, instead of one of the local guides staying with me, it was Dr Collins who did so. 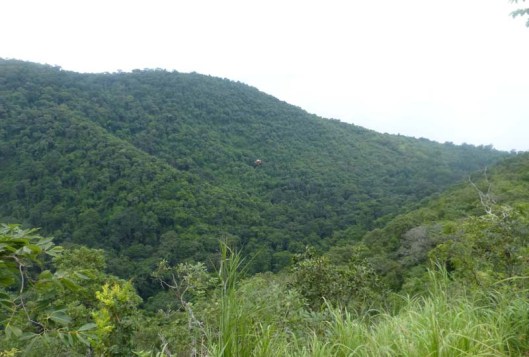 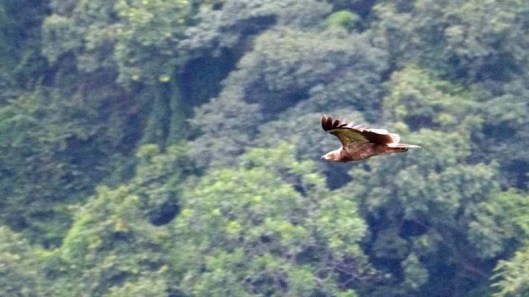 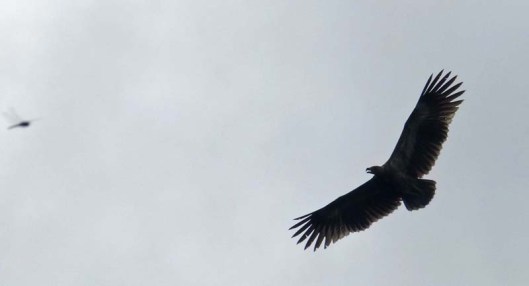 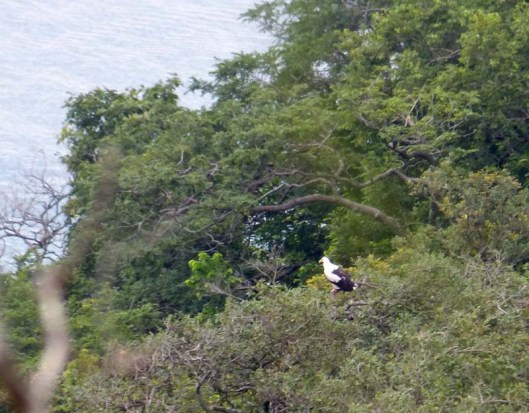 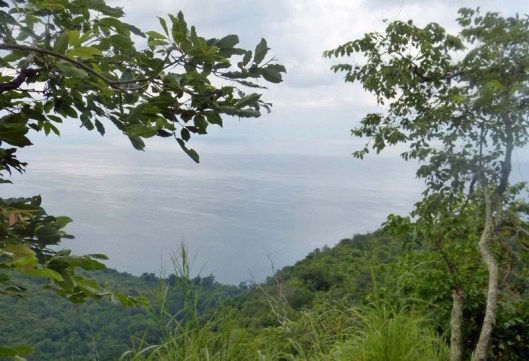 Over there, the other side of Lake Tanganyika, is the Democratic Republic of the Congo

Panorama at the top of Jane’s Peak

He and I  remained at Jane’s Peak – so named because she early on established that this was an excellent viewpoint to observe where her research chimps were – for the best part of an hour, and then gently made our way down back to the centre. 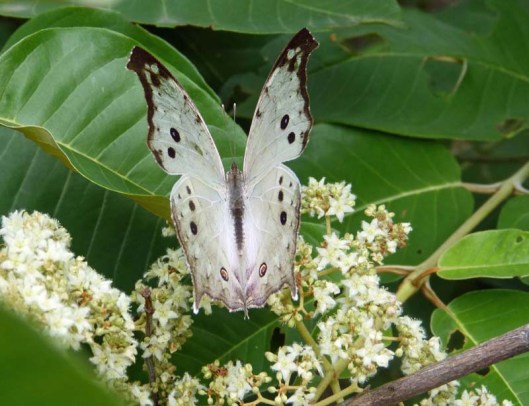 By far the best butterfly in the whole trip.  About 8 centimetres high, and rarely staying still, according to Dr Anthony. 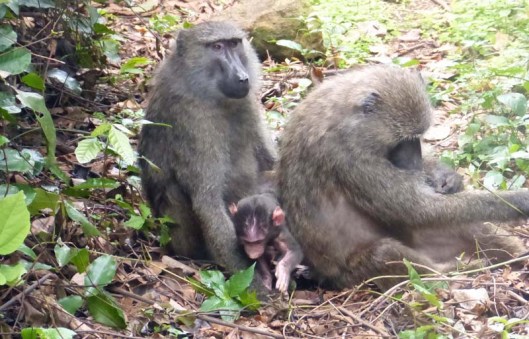 Seen on the walk down, and not part of the habituated troop.  The baby is very young and still staggering around. 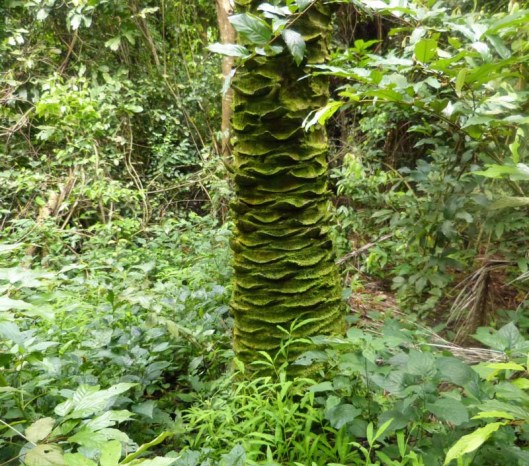 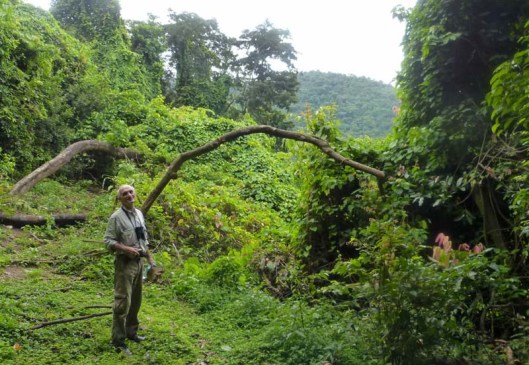 What a privilege for me this was!  Someone who always wants to know everything about everything, I had a captive source of information, a world expert on baboon behaviour, one who had lived at Gombe for nearly 50 years.  Dr Collins did not seem to tire of answering my questions, not only on baboons but on Jane Goodall’s work, and the continuing research at Gombe Stream.  What a lovely morning I had!  It was like having David Attenborough to myself!  I didn’t mind the absence of chimps, though was very pleased to learn from the colleagues who did continue that – after another 90 minutes’ exhausting trekking  – they had excellent sightings, a just reward for their efforts.  So we were all happy.

The afternoon was spent sitting around, on patio and on the beach, for as long as we could stand the heat, and Dr Collins joined us later on, staying for dinner as well.

We were to leave the next morning, to start the reverse of the journey back to Dar es Salaam – boat, a night in the guest house, three-hour flight, but had a couple of hours to spare before then.  Dr Collins invited us to go along the beach to the simple house in which he lives – ‘Jane’s House’ – where she still stays when she visits, as she had just two weeks previously.  (While we were allowed to explore the barn-like building, it would certainly not have been good form to take photos!)

Why am I finishing this account with a picture taken when I and three others were dabbling our toes in Lake Tanganyika that last afternoon?  Because it emerges that one (at least) of our number has come back with the very nasty disease, bilharzia, caused by minute worms entering the skin from bathing in fresh water in tropical regions. (More info here:

Now while I didn’t go swimming in the Lake at either Kigoma or Gombe, I had no option but to shower in water taken from it – and there was that dabbling of course.  I am awaiting the outcome of a precautionary test, but I’m not the least bit worried.  Treatment is simple and effective.

The water was lovely and clear and warm… 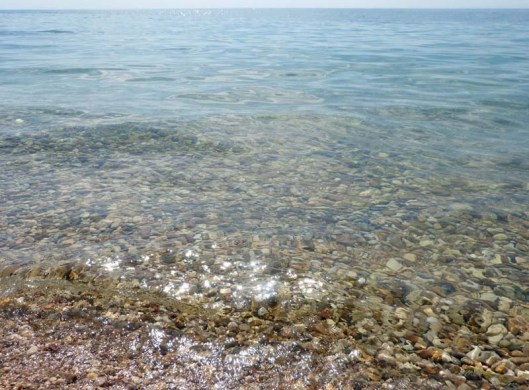