Tuesday, Albi and Toulouse-Lautrec.  When I planned this trip I had no thoughts of spending any time in built-up areas, other than Toulouse.  I had already visited Albi in 1990, including the Toulouse-Lautrec museum, and I really had wanted to just relax in the countryside for the rest of my trip.  But clearly that was not on today.  The weather for forecast for Tuesday was the same as the day before, though thankfully a few degrees warmer and with less wind. My options were limited.  Spend all day tasting wine in the Gaillac area – bearing in mind that I was driving myself around, and travelling home by plane! – or a further visit to Albi.  Or stay at my lodging feeling cold and sorry for myself.

So Albi it was. In 1990 we had had no problems in parking, as best I recalled.  28 years later it was impossible.  I drove round and round the main city centre car park, and found nothing.  I drove round and round the streets nearby.  Nothing.  In due course, I found, some way away, a meter space, and at least it was for four hours, not one.  To get back to the centre of town fortunately I was able to see and make for the 78-metre/356 foot bell-tower of the immense cathedral. (I had only the sketchiest of maps, of just the very centre of the town.)

Next was the search for the tourist office, to buy a joint ticket for entry to part of the cathedral and the Toulouse-Lautrec museum.  Nothing signposted.  In due course I found a building on the cathedral square with an old panel saying ‘Syndicat d’Initiative‘, the old name for a tourist office, but the door was firmly shut with a notice saying the tourist office was now on the opposite side of the square.  I followed a young man who had read the same notice and was heading 180° away to where we had been facing. Nothing.  He asked a passer-by, and I listened in.

The tourist office was in fact only 90° from the old one, slightly round a corner – and hidden by a large white van. The very helpful young woman inside was patient as I prevaricated. To cut a long story short, time was running out on my meter, the museum would not open until 2 pm, and I just couldn’t work out what to do.  Having in due course bought the ticket, I went to have a much needed coffee (all these wanderings had been under drizzle), and decided to visit the Cathedral, have a bite of lunch, go to feed the meter, and then come back to do T-L.

The cathedral claims to be the biggest brick building in the world. 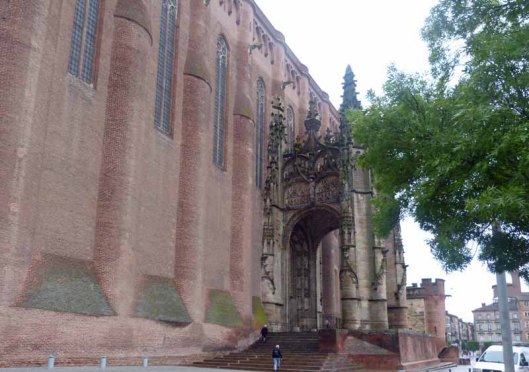 Perhaps it was my mood, certainly not helped by the dull weather, but I felt decidedly grumpy and unimpressed as I entered the cathedral, even if it was dedicated to St Cecilia, the modern-day patron saint of musicians.  I knew that the ticket I had bought would get me in to the ‘Grand Choeur‘, but the high altar seemed to be to my left as I walked in, whereas the layout of the building would lead me think it should be to the right.  No-one was checking my ticket either, which was puzzling. 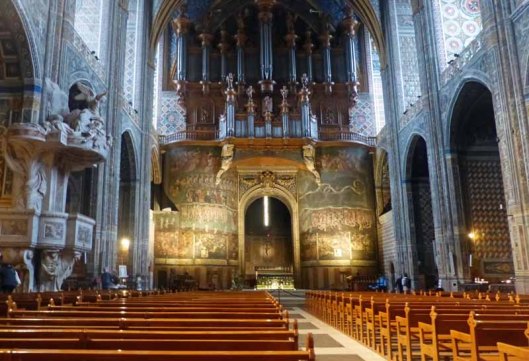 Anyway, I did like this modern altar and lectern. 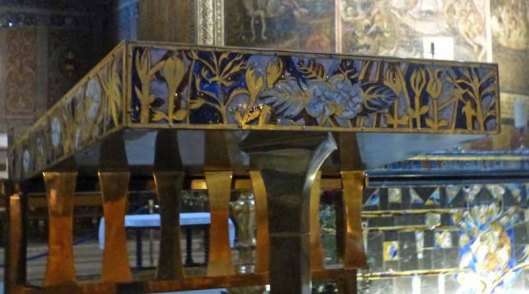 And I was impressed by the rood-screen behind me, of which this is just a segment.

Once I had the audioguide all became clear.  The west-facing worship is the result of the desire to save the very intricate and huge rood-screen, carved from a limestone which hardens over time. At the time when Catholic worship changed to include the congregation, not just the monks and priests, most rood-screens were destroyed. Here, however, they decided to turn worship round, and have the congregation facing west – most unusual. What I had seen already was not the Grand Choeur. My ticket was to get me into that – facing East – and the treasury, and supply the audioguide.  I visited the treasury first. 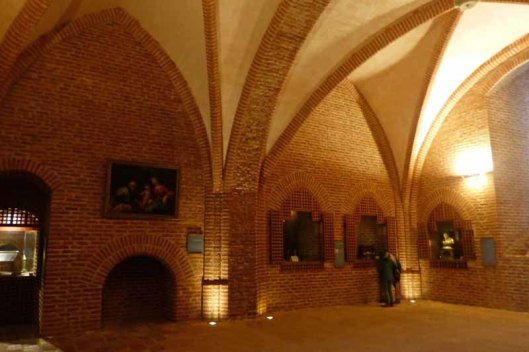 This window on the way up the steep spiral staircase to get to it is a reminder that churches were fortified in those turbulent days of the bastides. 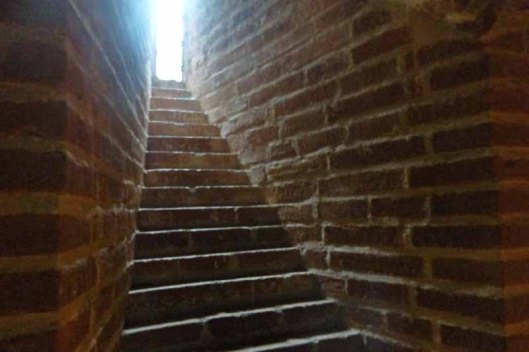 Then I moved into the Great Choir itself, which was very ornate, a great contrast with the outside of the basilica. 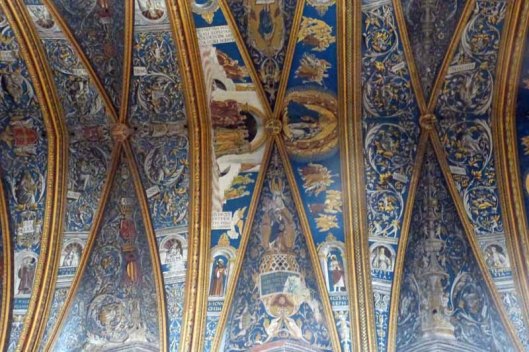 On emerging from the cathedral into the wet again,

I went back to the previous café for a bowl of soup, though on seeing the menu I had a very nice salad instead.  Clever clogs then thought she would try another, seemingly more pleasant, route back to the car to feed the meter.  And couldn’t find the car. Found herself outside the metered area, so knew she had gone too far.  Felt very frustrated, not yet despairing, but really didn’t want to go all the way back to the centre and out again.  Then….. I remembered that I had my satnav with me, and that I had registered on it where the car was parked!  Only three minutes’ walk away but I would never have known.

Having fed the meter, I headed back to the centre and the Toulouse-Lautrec museum. 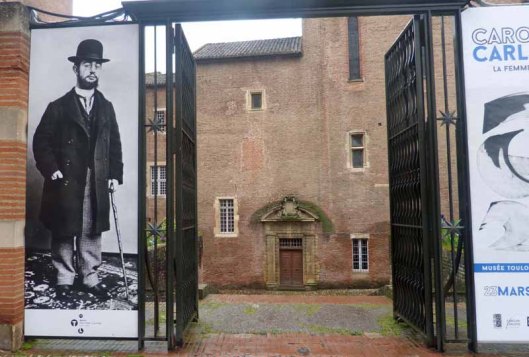 This was established by T-L’s mother, after her son’s early death, in the Palais de la Berbie, formerly the bishop’s palace.  It is a splendid building in its own right.

Another audio-guide took me round.  I did much enjoy this visit, and here’s just a small selection of pictures I saw. 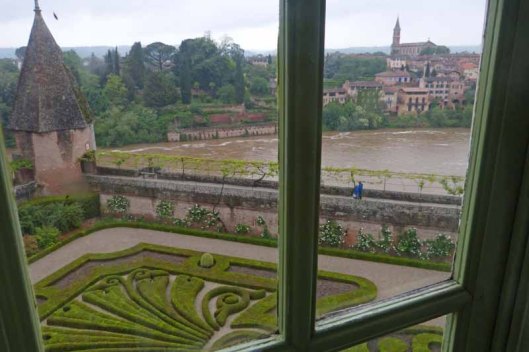 Views from the windows. The river is the Tarn. 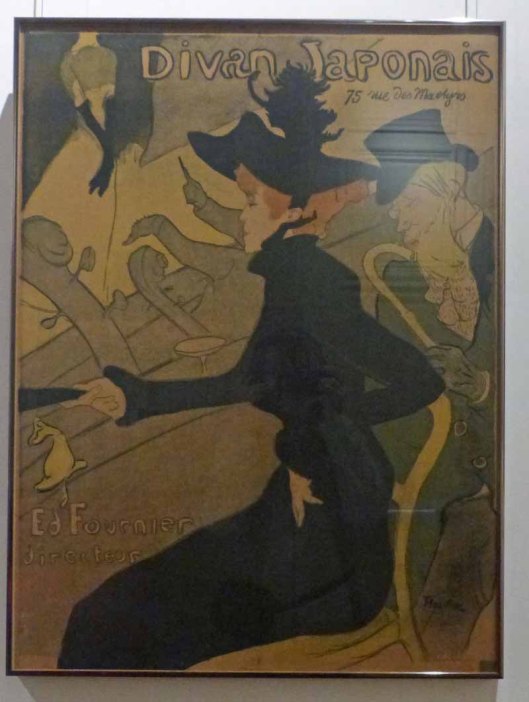 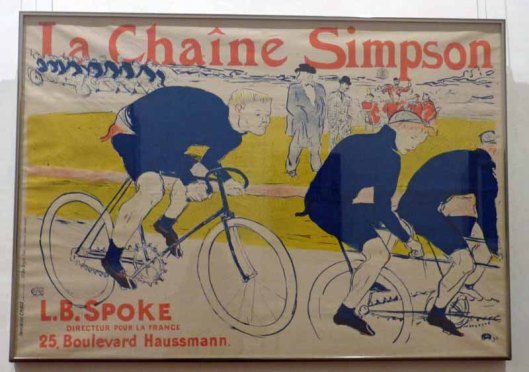 1896. The Simpson Chain was short-lived, and its only claim to fame these days seems to be that Toulouse-Lautrec designed a poster for it.

There was the chance to see more of the Palais de la Berbie after seeing the T-L exhibits, but I was pretty tired by now, and only had a quick look around.

I couldn’t resist taking a photo of a photo of this famous poster, though it’s not by T-L 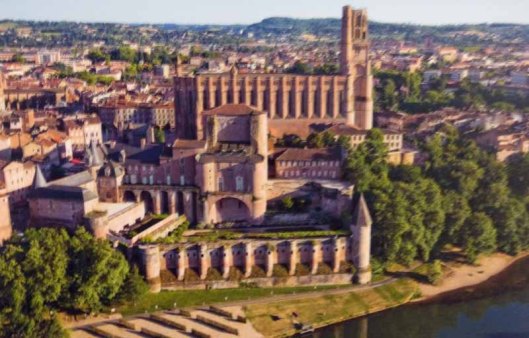 These two also are photos of photos inside the palace

This one particularly gives an idea of the immensity of the cathedral.  The huge palace is dwarfed by it. 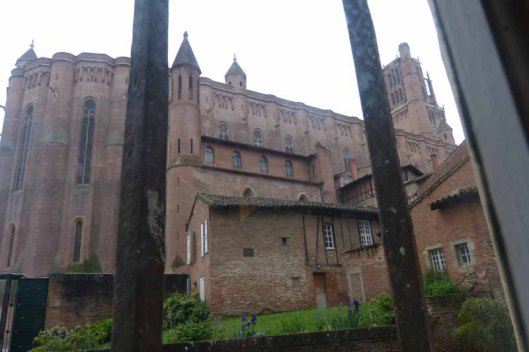 I was on the first or second floor when I took this photo.

By the time I made my way back to my car (by the tedious sensible route this time!) it was rush hour, and raining solidly once more by now.  But I could look forward to another excellent meal, courtesy of my host.