Several months ago, I had seen publicity for a Klimt ‘Immersive Experience’ – whatever that might be, but it looked interesting – to take place at a yet to be declared venue in London. I toyed with the idea, but with no idea of where in London it might be, and therefore how long it would take me to get from my arrival in the capital by train or bus, I decided against. However, when I saw, a few weeks later, that there was to be a Van Gogh ‘Immersive Experience’, also at an unknown venue, but somewhere in Bristol, that seemed more doable, so I booked for last Thursday. When the venue became known I was very pleased, as it turned out to be near to Bristol Temple Meads railway station, so not only doable, but doable direct by one bus from near my home.

Not that near though. I should have allowed 20 minutes to walk to my bus stop. As it was, I left 3 minutes later than I meant, but I would still have got to the stop on time. The bus overtook me when I was still three minutes’ walk from the bus stop. I ran, and ran, and ran, very cross that it seemed to have arrived early. I made it, even having to wait for a couple of minutes while people in front of me paid their fares. The bus left exactly on time, so I couldn’t really complain. (It took seven minutes for my breathing to return to normal, so unfit am I.)

Still, I then had 80 minutes to just sit and enjoy the countryside going by. I got off at Temple Meads, and went into the station to buy a sandwich, passing this statue as I went.

It was rather less controversial than another statue in Bristol, now in its more rightful place in a Bristol museum. (That one was mentioned by Neil McGregor in a lunchtime slot on BBC Radio 4 a few days ago, and also came up in questions at a talk by David Olusoga that I went to in Street recently. He pointed out that statues – of whoever – were rarely put up because the subject was widely admired at the time. They were erected by a few of his (sic) rich friends. And the historian Mary Beard had told him that the Romans regularly just changed the head on statues to reflect changing interest.)

The venue, called the Propyard, was located about half a mile, 0.6 km, away, in what was clearly a former industrial part of the city. To get to it I had firstly to walk along Cattle Market Street alongside the station, which led into Feeder Street. I noted a rather clever traffic/illegal parking management scheme there, of particular interest because Bristol have been advising my local authority on a somewhat similar scheme to be installed in Glastonbury.

I also noticed (interesting) graffiti all the way along. The Propyard’s Facebook page calles it an art trail.

Here, to my left, three waterways converge. To my left, the River Avon (New Cut). Ahead of me, from where a pleasure boat is emerging, the Floating Harbour (the original course of the Avon until 1809 as this article explains), and to my right, a cut opened at the same time, called The Feeder.

I walked along Feeder Road, The Feeder canal to my left, and was pleased to see after not too long a big ‘PY’ on the side of a building which turned out not to be the Propyard, but immediately beyond it.

This is the Propyard, a former warehouse, once used by the MoD for testing torpedoes! It opened as ‘a space for contemporary arts, music, food, and culture’ in July last year.

To be honest, for the first half hour, I could not see what all the fuss about this ‘experience’ was. Panels of straightforward facts about, and analysis of, Van Gogh’s life and work, obviously no originals, with just more modern touches, like the ability to download the panels onto one’s phone via an app. I felt a bit sorry for the young children around. And the constant noisy music was annoying me.

This short film was interesting. It was about Van Gogh’s liking for and use of bright colours. It concluded with the theory that he was colour blind, and needed bright colours to be able to distinguish between one tone and another. I have looked into this since, and found a number of articles dating from 2012, about a Japanese artist-philosopher, Kasunori Asada, who has applied his Chromatic Vision Simulator to Van Gogh’s work and reached the startling clour-blindness conclusion.

A fair chunk of the exhibition was devoted to discussion on VG’s many versions of sunflowers in a vase.

There were a couple of dioramas of his works. The child in this one is real, and her brother joined her a few seconds later, when they proceeded to romp on the bed. Something for children at last!

At last the Experience began to kick in. After the fairly conventional exhibition, one walked through this small room…

I recalled the publicity, which has people standing around in a large space surrounded by Van Gogh themes on huge walls, phones in their hands. I took dozens of still and moving pictures; here is a tiny selection. I also just sat and watched for long periods. The whole show, which seemed to go through the various phases of his life, lasted perhaps 25 minutes.

I looked immediately to my right to see this, but it was also diametrically opposite.

I left when the show reached where I had come in, and in the next room decided not to accept the invitation to create my own masterpiece by crayoning in between the lines.

Nor to buy anything in the very well-stocked (and to my mind expensive) gift shop. But I did recognise the right-hand painting as being on a jigsaw I had given at Christmas.

The way out was through the bar. Ah, I hadn’t needed to buy a sandwich at the station – but then I wouldn’t have seen Brunel’s statue.

When I had been researching how to get to the venue, Bing Maps had told me that I could get off my bus a stop early, and walk alongside a waterway to get to Feeder Road, so that seemed like a good idea for my return journey. This was how it began.

Having gone under this bridge I looked back. The River Avon is low, the tide being out (or the waterway being managed – I have no idea).

Spoiler alert, I should have crossed this bridge to get back to the main Wells Road and my bus stop, but it didn’t even occur to me, it came so soon.

I was enjoying my rural urban walk.

I thought that this moorhen was pulling up some weed, but closer inspection reveals that it is scratching itself with its green leg.

‘This must be my bridge’, thought I, ‘I hope there are some steps up to it.’

There were, but I came out not on the main road as I expected, but a short side one, leading on to it. ‘Nice new flats’ I thought, ‘Don’t remember seeing those from the bus, but then I was sitting on the other side and looking out the other way.’

I looked for a bus stop, and when I got there, I didn’t see my number bus listed. Fortunately I had brought my book of Bristol street maps with me. And found that I had clearly come out not on the Wells road, but that for Bath. The two had diverged some way back. I hoped there was a short cut through for pedestrians.

And the climb hadn’t finished yet.

Nearly back at the Wells road, I looked down a side street. The first bridge I had passed under as I went along the river can just be seen in the very middle of the picture – if your screen is big enough.

A minute or so later, at 15.47 precisely, having tottered up all that way, I was at the bus stop at Totterdown. The timetable said the bus I wanted was due at 15.47. I saw no bus disappearing into the distance and very much hoped that it was just late, otherwise there would be a 30-minute wait. It was, and five minutes later I was able to rest my weary legs for another 80 minutes.

An interesting day! I wonder if some of those graffiti artists are colour-blind?!

It is very easy not to notice Romulus and Remus at the side of the busy Wells/Bristol road, at one of the highest points of the Mendip Hills.  I drove by in ignorance for months after I moved to Somerset, until someone pointed them out to me.  But only today have I actually found parking and visited them on foot. 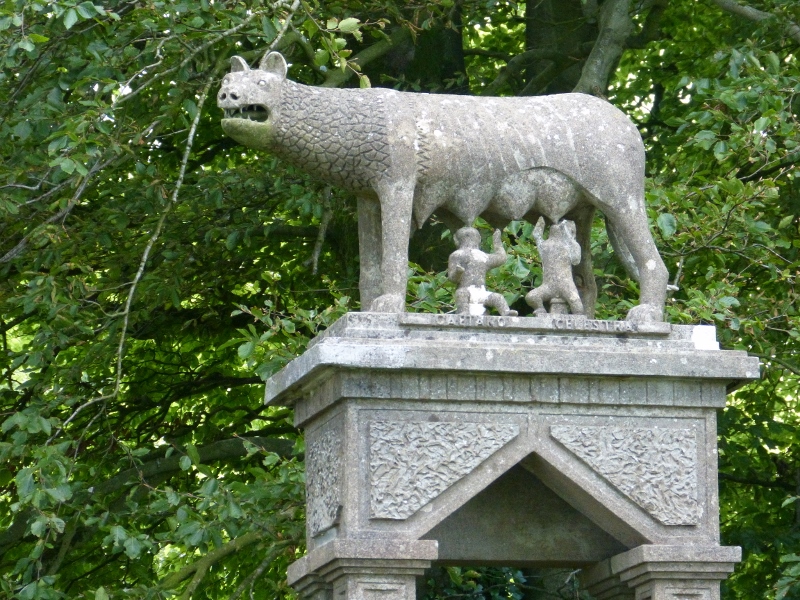 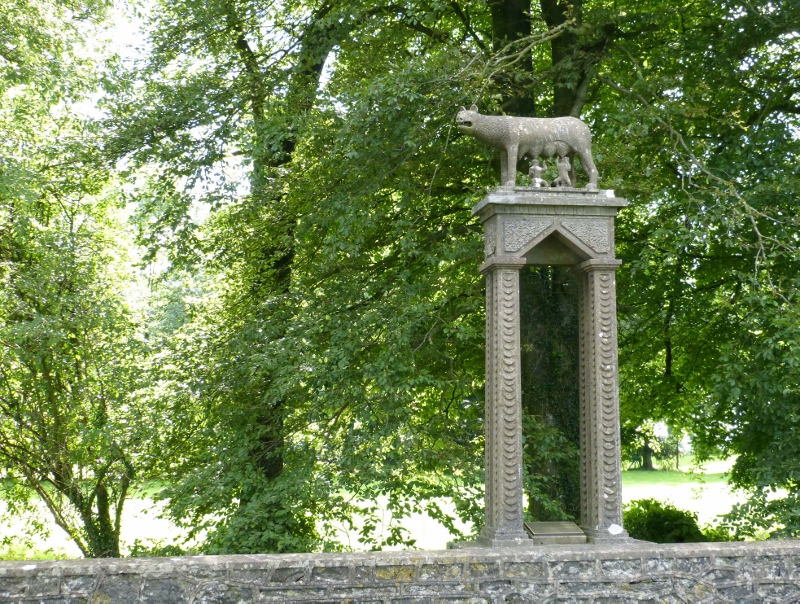 It’s a sculpture created and given by some grateful Italian prisoners of war as they were released in 1945.

As I stood and read the plaque, I couldn’t help by be moved, even though I already knew the story.  Perhaps it was learning the name of the sculptor that got to me. He settled in the area and continued working as a builder and stonemason.