Real Alcazar, Seville, a UNESCO World Heritage Site, Sunday 22nd October. The Moorish rulers, who had conquered Andalucia in 711, had constructed the great fortress, the walls of which you can’t help but see if you are in central Seville.  At the re-conquest of Southern Spain by Christian rulers in the 13th and 14th centuries, not all the Moors were expelled.  Some craftsmen were allowed to remain, and we learned a lot about the Mudéjar (‘those permitted to stay’) influences on architecture as many subsequent rulers redesigned the former palace.  Pedro I ordered a complete redesign of the interior in 1364, and Carlos V (1516-56) was another significant contributor to its current appearance. Further developments continued up to the 19th century, notably to the gardens within the walls, which I had skirted the day previously as I walked through the Murillo Gardens and to the Archivo de Indias.  The palace is still used by Spanish monarchs when they visit Seville.

Public entry was by a fortress gate.  Here is a splendid Mudéhar interior entry. 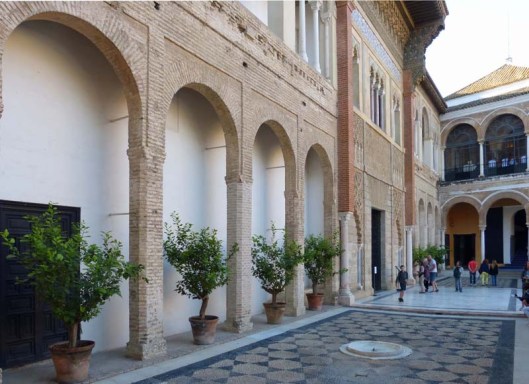 It was not only to avoid visitors that eyes drifted upwards much of the time: 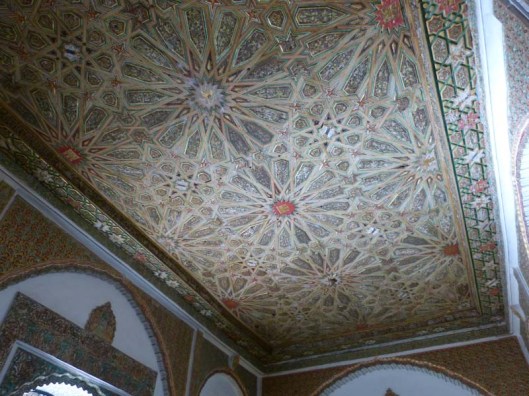 A rare chance to look at a floor, unencumbered by visitors.

So many thousands of details to be admired. 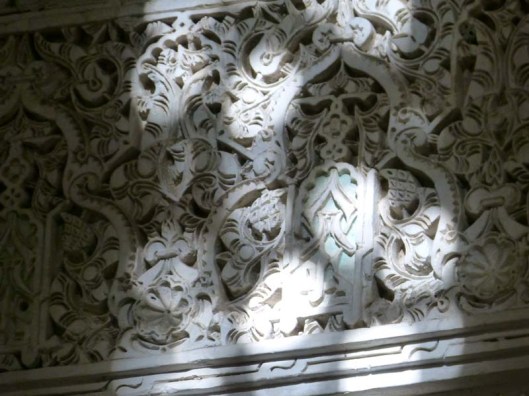 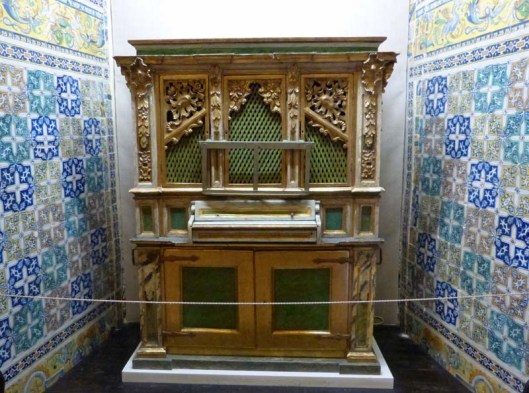 An organ in the renaissance part of the palace, developed by (Holy Roman Emperor) Carlos V. 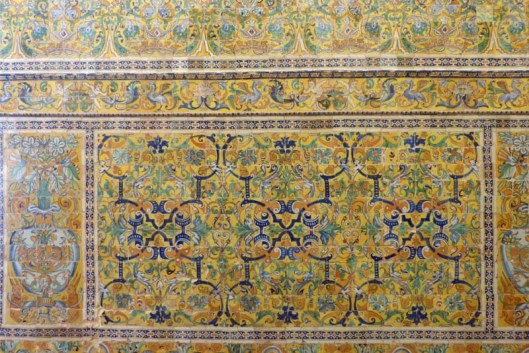 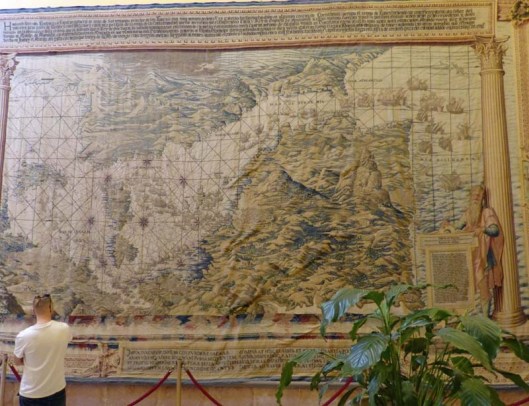 Frustratingly I managed to delete a detailed video I made of this great tapestry of Spain and surrounding countries, seen, in effect from high over the eastern Pyrenees, looking south. To me it was amazing that those who could climb no higher than the highest mountain could imagine this satellite view of their country, and of north Africa, Italy and the south of France.

The Ambassadors’ hall, where kings did most of their governing, was a wonder, only partly captured even on a video. 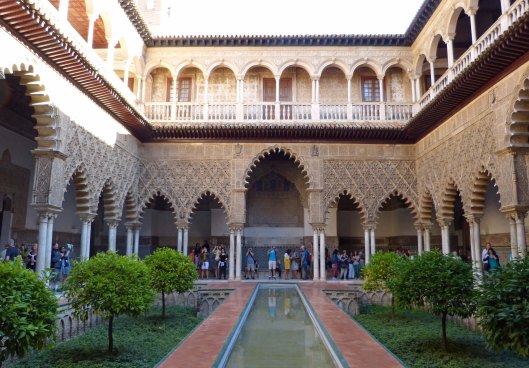 Mudéhar architecture on the ground floor, renaissance on the first, and a glimpse of an original fortress tower top left 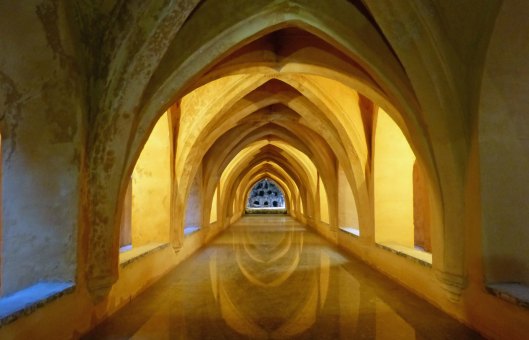 Known as the baths of Maria de Padilla

There were several acres of gardens, including those designated as French, and English.

The Fountain of Mercury 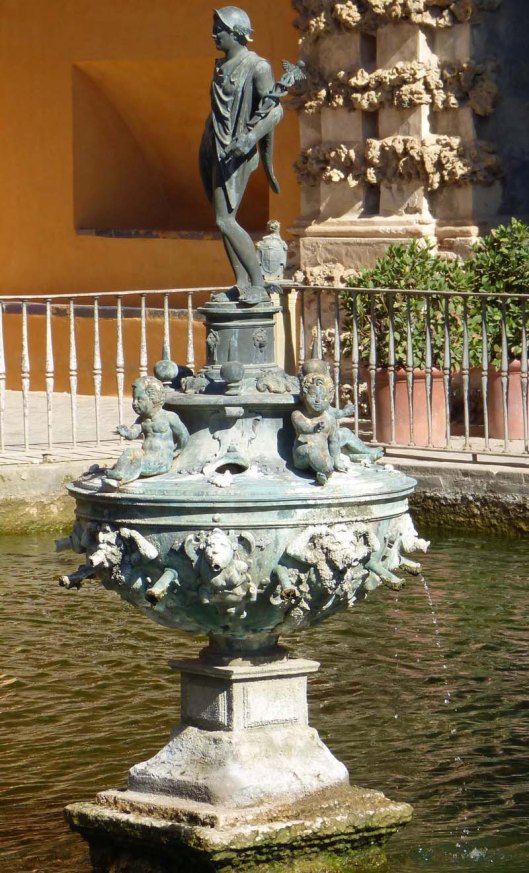 As I sat in the gardens eating my apple, I was entertained by the squawking of these parakeets,

and was surprised to find, on zooming the camera, that they had not only been provided with perches in the palm trees but that some had identity tags. 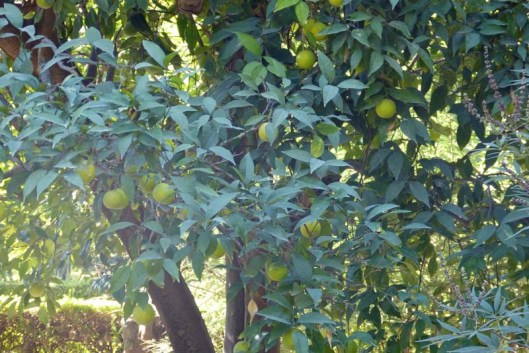 One of several rose gardens

Water and fountains are very important in Mudéhar style 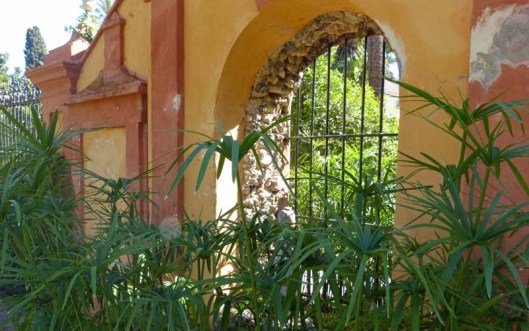 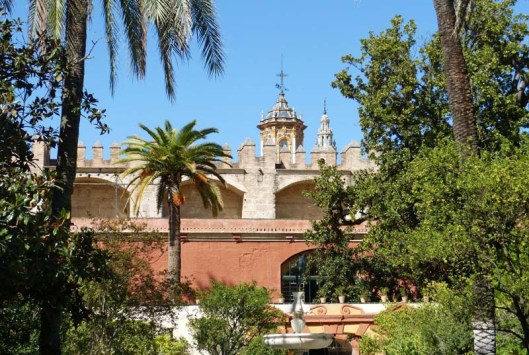 I left the Real Alcazar mid-afternoon, with still the Cathedral to visit before returning to my hotel.  Not omitting another visit to the nougat shop.