We saw many, many colourful birds in the Pantanal.  This, I think, was my very favourite.

I had a curious respect and admiration for this creature.

The Yacaré caiman is endemic to central South America 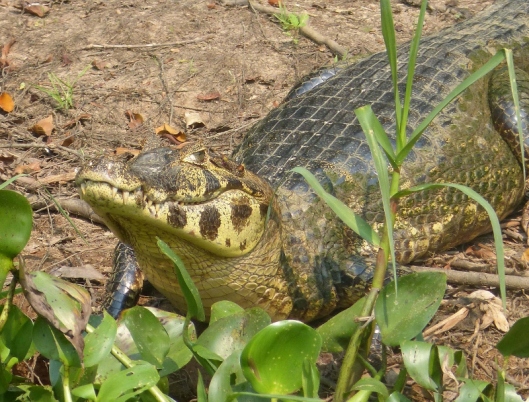 Somehow, the more colourful version is more appealing than the black, though I’m not sure that’s the right word.  Jaguars and anacondas like them whatever the colour – they eat them.

Truly attractive was the demonstration of synchronised drinking by Mr and Mrs Bare-faced curassow: 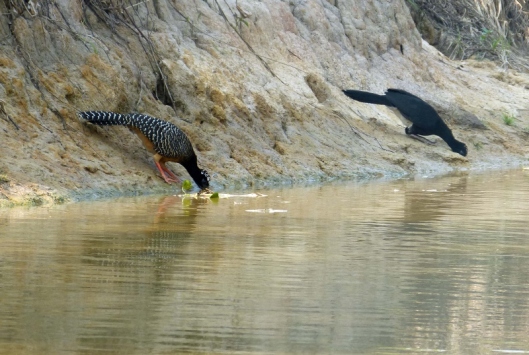 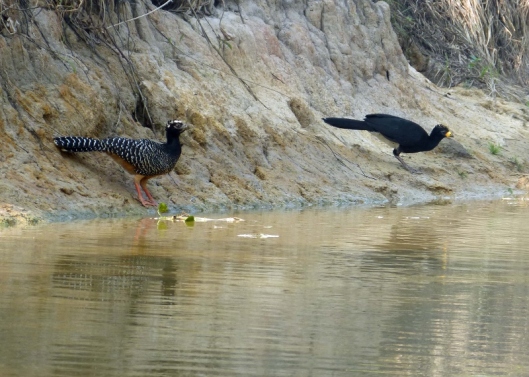 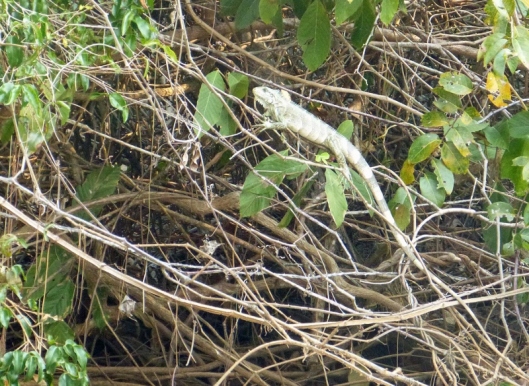 Iguana. They come in all shades of green, and sometimes lavender, black or even pink.

The walkie-talkies crackled, and we were off on one of our white-knuckle rides (I exaggerate a little, but the speedy rides were great fun!) to see an unknown jaguar found by one of the boatmen.

More screeching brakes, and our boat turned round!  Manuel’s eagle eyes had spotted a jaguar on the bank – and there were no other boats there.  Very satisfying, especially for the guides, that we were able to observe on our own for a while, before others – honour obliged Manuel – joined us.

It was Maxime again, we were told.  Just check those forehead markings!  Frustratingly, we had no idea where we were in respect to where we had seen him previously, a minor failing of the organisers to my mind. No matter, there we were, observing this beautiful creature once more.

Kiskadee. Some say it calls its name.

In due course, we went on to join others observing the original ‘unknown’ jaguar we had set off to see.  He (presumably it was a he) remained unknown, for this is all we saw for the 30-40 minutes we stayed there.  Definitely the least exciting of all our sightings!

But here is Dave Allen’s expert video of Maxime’s failed attempt to catch the capybara the other day.  You can hear the barking capybara at the end. 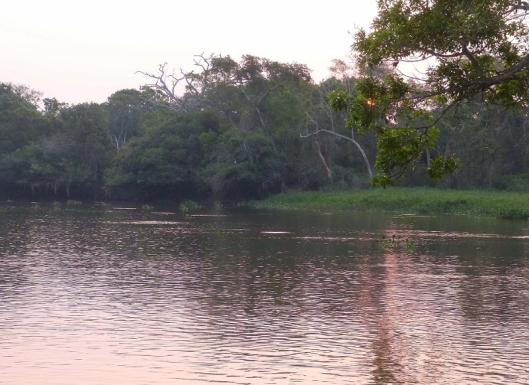 These Blue-throated piping-guans were there every morning under what we called the cormorant tree (explanation later), but not when we returned.

To our utter delight, shortly after setting off today, we came across a family of giant river otters, to our right as we meandered along a wide river.  Ten or eleven individuals in all, including four cubs, which were often carried in the mouths of adults. 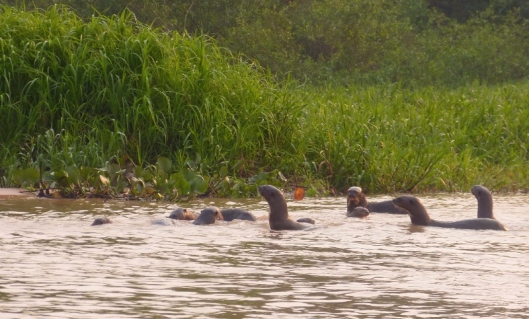 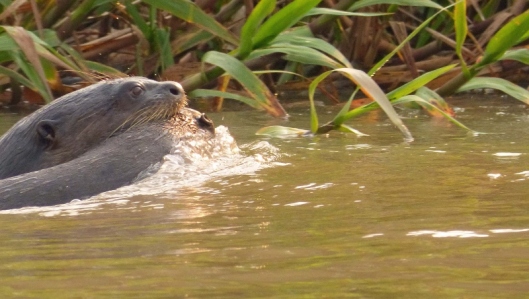 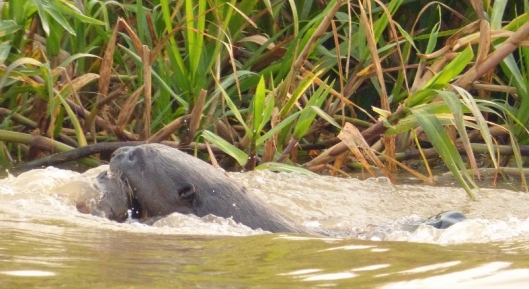 After a while they decided to cross the river in front of us, in search of one of their holts.

We continued on our way, seeing birds (and other creatures) we recognised, some we hadn’t seen before, and some I’m not sure of.

Not so sweet, this size

Semi-palmated sandpiper (ID thanks to BL) 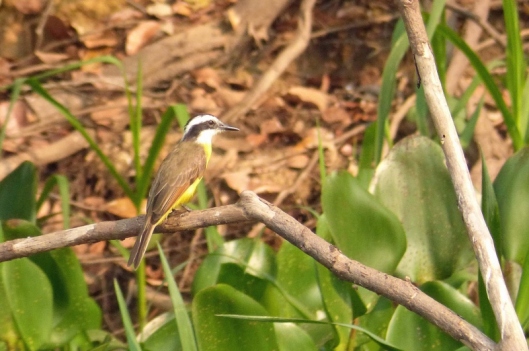 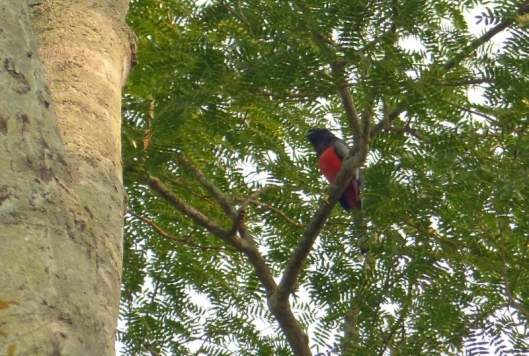 We were always pleased to see these, commonplace though they were. 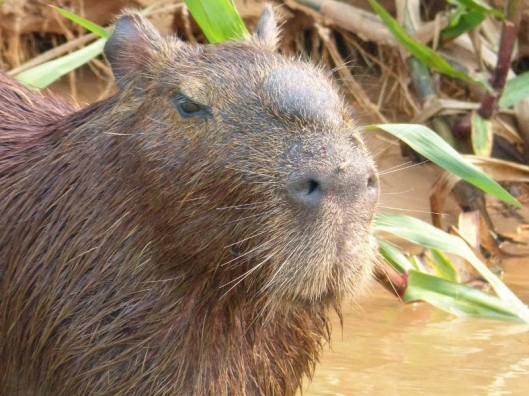 And in due course we found ourselves, along with Peter and Bianca, in almost exactly the same spot we had all been the previous day.  This time we got much better views of the beautiful female, with her much finer features. How long could she stand that heat? I wondered, and in due course she did move back into the shade.  Peter thought this could be an invitation.

Hopeful Peter, Bianca turning back to him

As we could hear from her vocalisations, he was smartly rebuffed, and when we moved to go back to the flotel for lunch, they had resumed almost the same positions as before. 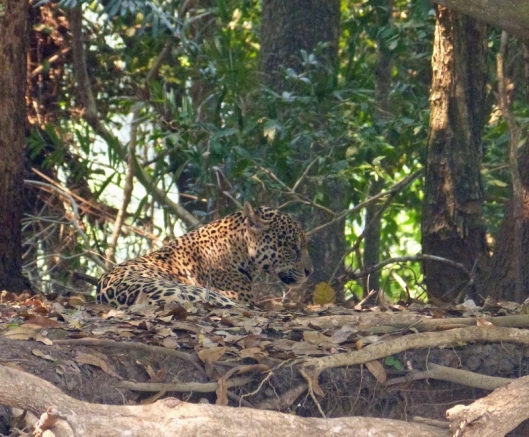