Wednesday, Final scenic drive. It was with very mixed feelings that I woke this morning. Was I actually keen to get home?  My flight back to Bristol was late afternoon, and the car had to be returned by 2.30. The weather promised to be rather better, and I could hope not to have to use the broken umbrella, even to see a little blue sky. It would only have taken me under an hour to get back from Lisle-sur-Tarn to Toulouse airport on main roads, so planned out a route via country roads and villages.  Not as spectacular as I had seen on Monday, as the geology was less dramatic, but pleasant – and it would have been even more pleasant had I in fact seen any blue sky. At least there was no rain. 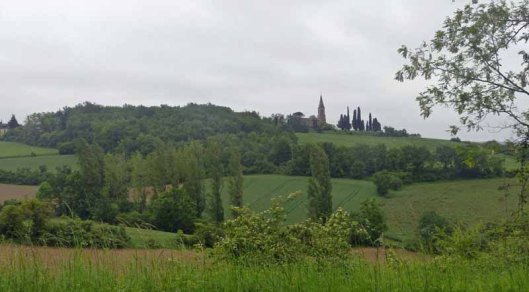 Taking the quiet roads enabled me to see and stop at more wildflower-studded meadows, 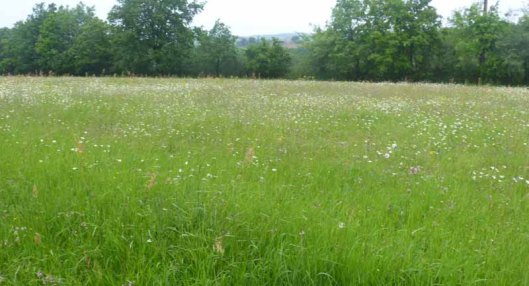 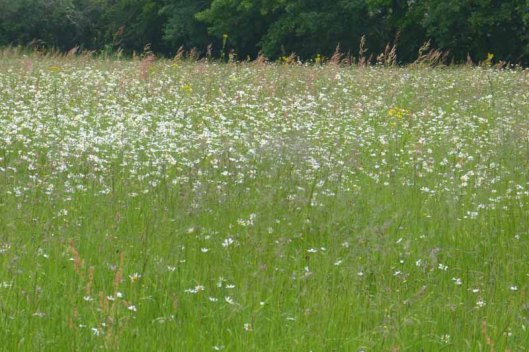 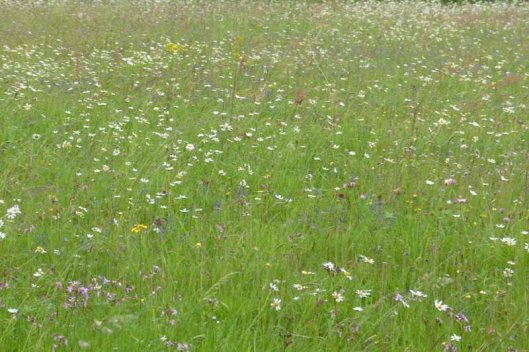 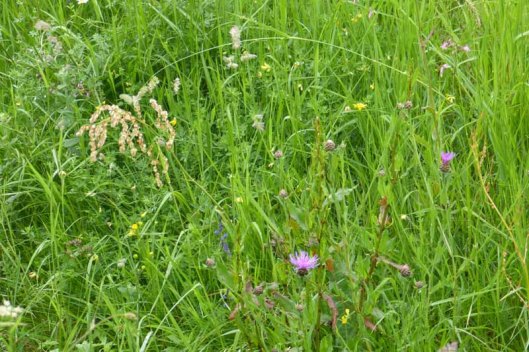 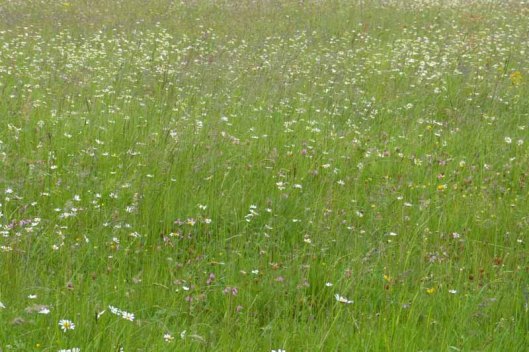 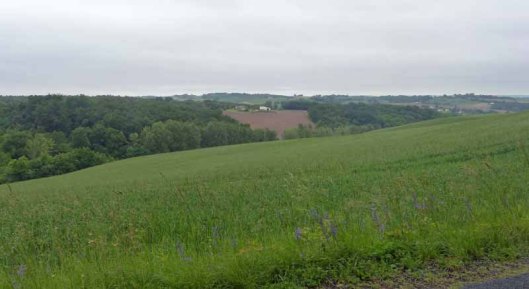 and pretty – if forlorn – houses. 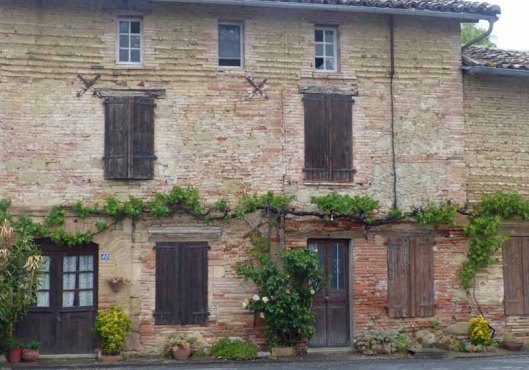 This part of France maintains many of the plane trees lining roads, originally designed to shade those walking or driving carts along them.  (Other places blame them for car accidents and have ripped them out.) 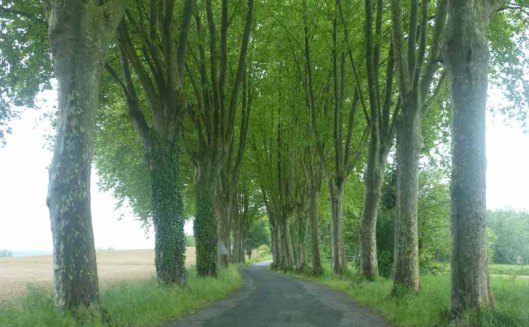 I had never before seen oaks serving the same purpose. 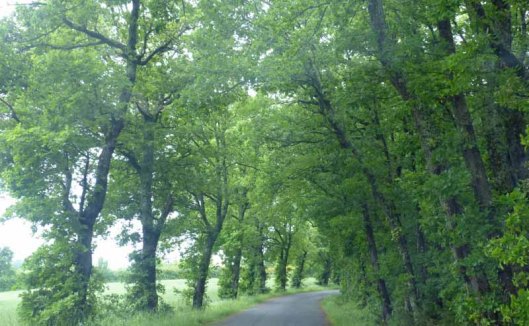 Coffee time, and I stopped at a town called Villemur-sur-Tarn.  No problem in parking here, though I didn’t go right into the centre, but stopped along an embankment of the Tarn. 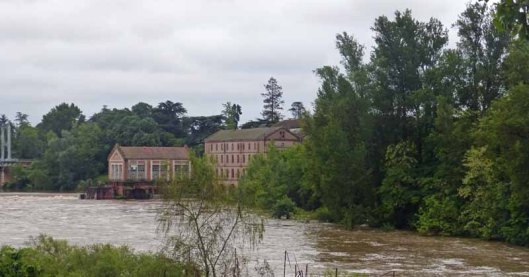 When I saw this as I walked into the centre, I did wonder if I should have left my phone number in the windscreen! 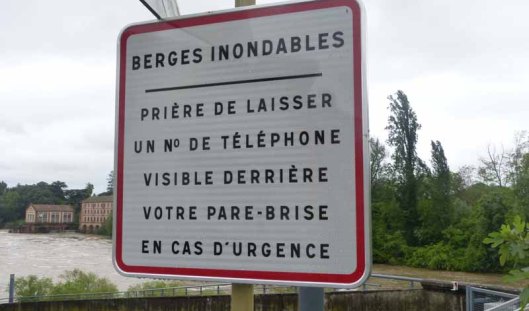 It was reassuring shortly afterwards to find out that the last time that the flooding had come so high was in 1766. 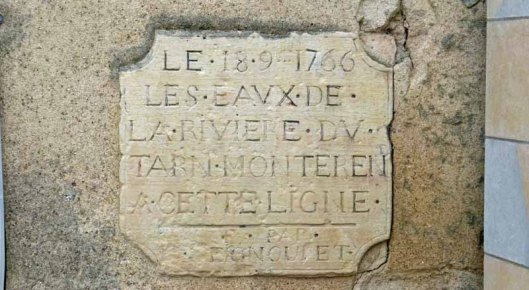 The more modern notice must have been for the underground car park I had passed.

Further along the embankment, a very full information panel told me that there had been hydroelectricity here as well, from 1896, and that the factory opposite had made cereal foodstuffs until quite recently. 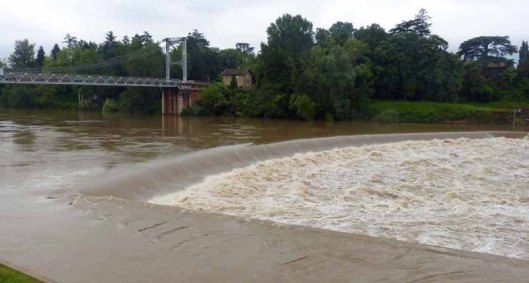 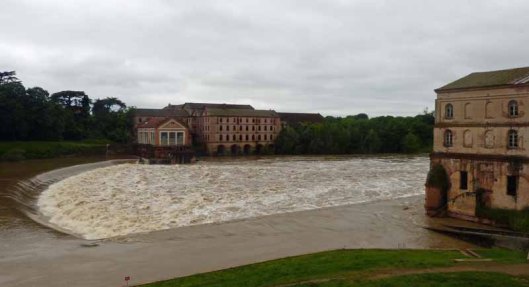 But what’s happened to the celebrated French pavement café?  I could find absolutely nowhere, inside or outside, to have a drink! Even the Café de l’Hôtel de Ville was empty, not just of people but of furniture! 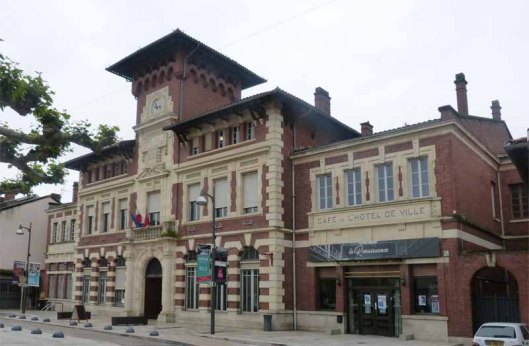 Fortunately I had water in the car.

I still had quite a way to go, but didn’t take many more photographs. 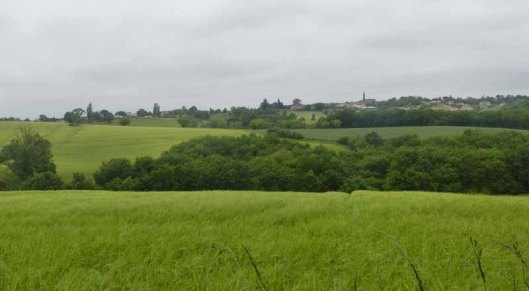 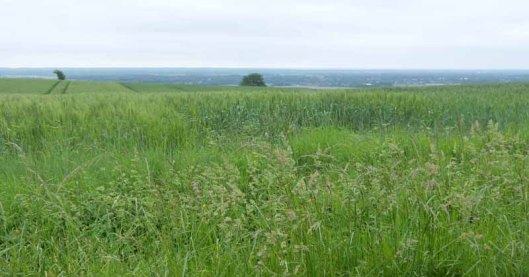 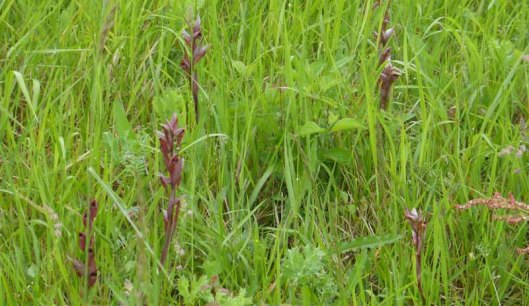 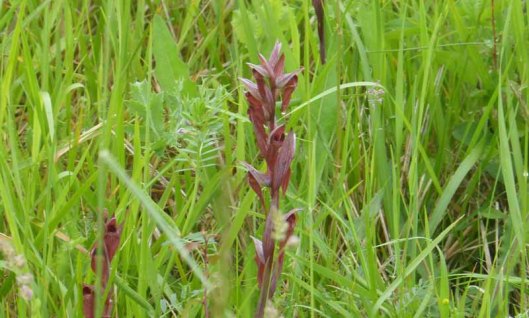 An orchid I think, but I can’t identify it.

Quite near to the airport I went through another town well-known for its region’s wines, Fronton, and saw an enormous co-operative, but couldn’t stop to record it, just this token one of vines.  (A bit irksome to read in that link that the area is known for its dry heat.) 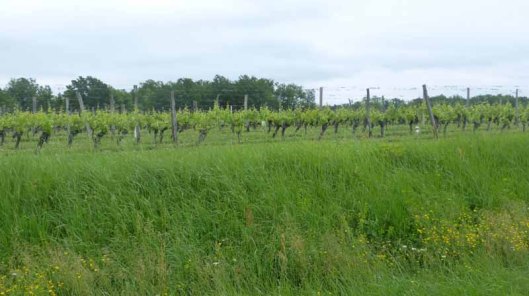 I hadn’t seen many poppies, which like disturbed ground, at all, so was very pleased, when driving around a town with a huge gravel works, to see these on a recently constructed bank. 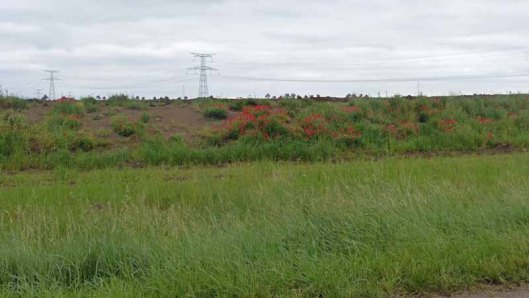 From now on I was concentrating on getting to the car hire depot on time, and on finding fuel to be able to return the car with a full tank.  At the airport it was with great satisfaction that I abandoned my poor, spoke-broken umbrella to a bin!

‘Did you have a good holiday?’ I have been asked since.  Hmm. Well, it wasn’t exactly what I’d planned, the highlights being cultural rather than rural, and I did feel deprived. It was pleasing to find that not only the lovely views (obviously) but also the lovely fields of wildflowers (not such a certainty) were still there. It would have been great to enjoy them in the ‘normal’ spring weather for that part of the world at this time of year.  Did I enjoy my holiday?  Yes, overall I did – but I was very glad to have included Toulouse in my plans! And that I now have an organised nature trip to Madeira to look forward to…

PS.  I did buy 100 grams of chocolates from that chocolate shop next to my hotel in Toulouse, and they only make very small ones.  So, at one a day, and back now a fortnight, I am looking forward to having the very last one with coffee after my meal this evening.