Birds in Andalucia.  Look, I’m not very good with bird identification, but I do know that eagles tend to soar.  So when Simon said, incredibly excitedly, ‘There’s an imperial eagle on that post’, I quickly zoomed in on it and took this. I was not alone. 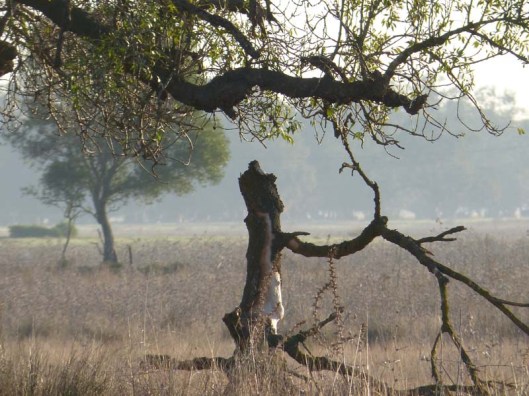 And not alone to realise, on examining the photo enlarged on the camera screen, that ‘that’ post’ was not that post!  What Simon meant was this – perhaps half a mile away.

When you go on a Naturetrek trip, they provide you in advance with a checklist of all the creatures you may see, with a column for each day.  There are always hundreds of species of birds on this list, and when we’re out I am in such awe as I hear naturalists/guides (and others) crying’, ‘That was the call of an X’, ‘There’s a Y.’  ‘Where, where?’ we all say, and they all do their darndest to help you see the creature.  I’m probably about average in being able to pick something out visually, no better, and am certainly poor on birdsong.  At the end of each day we gather together – nothing compulsory about it – and go through the list.  Of those seen or heard by someone, I will have seen perhaps a third to a half, the bigger the bird the more likely I am to have seen it.  I will have managed to take a photo of very few indeed. Here’s what I did get, with their identifications to the best of my recollection, (totally subject to correction, please).  Firstly in the Coto Doñana. 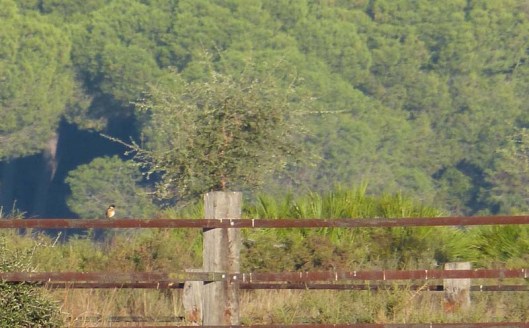 Cattle egrets living up to their name

And why not  take a bunch of starlings?  Especially when they are beautiful Spotless starlings, with wonderful glossy coats (though ordinary ones are pretty wonderful too!) 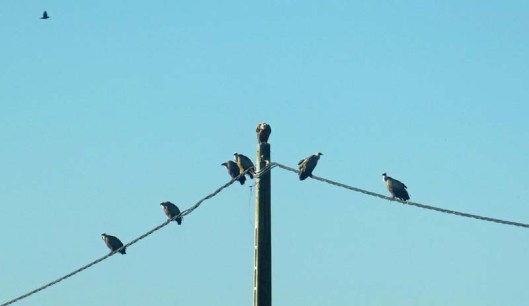 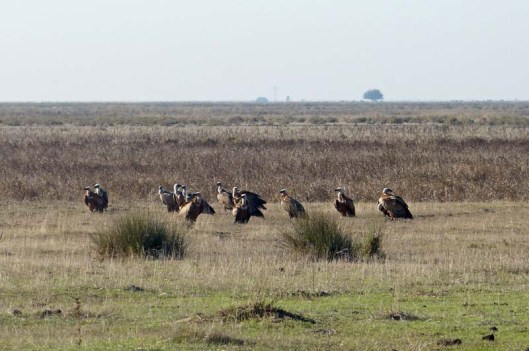 Best I could do to get a griffin vulture in flight

Easier to take this 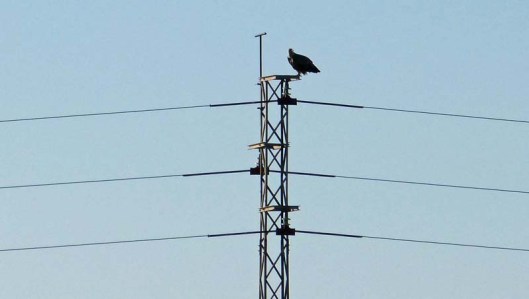 We had driven a great loop and were now nearer to (but not very near) the Imperial eagle.  Only about 4500 left in the world

And then Simon spotted another, incredibly far away, and I’ve magnified this many times, but the nest can be seen in silhouette, and the eagle in a direct line with it, on the right.  Two Imperial eagles in view at the same time!

Almost as exciting to the leaders were a total of 6 Egyptian vultures coming in to two trees.

White storks and a heat haze

More cattle egrets doing their thing. To quote Wikipedia, ” It was originally native to parts of Southern Spain and Portugal, tropical and subtropical Africa and humid tropical and subtropical Asia. In the end of the 19th century it began expanding its range into southern Africa, first breeding in the Cape Province in 1908. Cattle egrets were first sighted in the Americas on the boundary of Guiana and Suriname in 1877, having apparently flown across the Atlantic Ocean. It was not until the 1930s that the species is thought to have become established in that area.”

We were taken to a tiny patch of the wetlands that was still wet.  I would have expected that there would have been vast concentrations of waders there.  There were not.  In addition to these Little egrets (I think) and lapwing/black-winged stilts (which, or something else?) we saw spoonbill and other species further away.

Greylag geese, on the ‘lagoon’ at El Rocío

Then at our picnic spot at El Acebuche, I managed at last to see an Iberian (or azure-winged) magpie.  I had heard them mentioned a few times, but this was the first time I had properly seen the beautiful creature, rather smaller than the common ones (and there were plenty of those around). 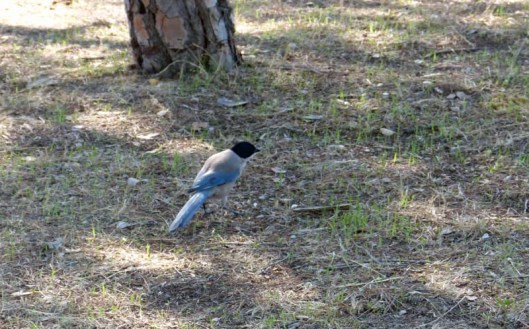 A few new birds (in terms of photographic opportunities) in the Sierra Morena.

We saw a fairly rare Cinereous (a.k.a. Eurasian black) vulture over our picnic stop by the Jandula dam, but sadly this is not one, but a griffon vulture. (Identification BL) 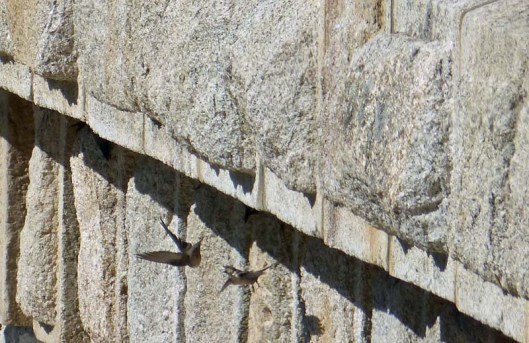 Rock pipits at the dam

There is a Blue rock thrush in this picture, also at the dam.  Half way up the slope there is a bit sticking out.  The bird is not that bit. The bird is the bit sitting on that bit! 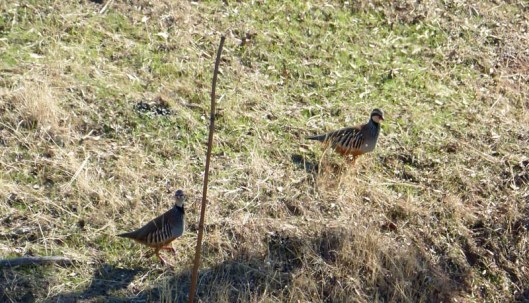 Some colleagues went out for a short early evening birdwatching trip on the second evening in the mountains, and came back saying they had seen an Eagle owl.  We all went to the spot the next day, and this is where we were searching.  (Well, the rock face was much bigger than this actually.) 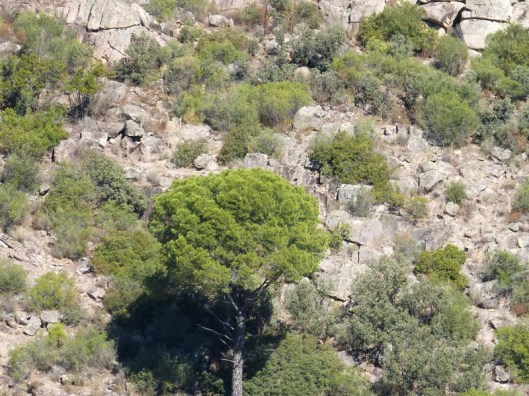 A third of the way down, and a quarter of the way in from the left there is this.

And within that there is this. 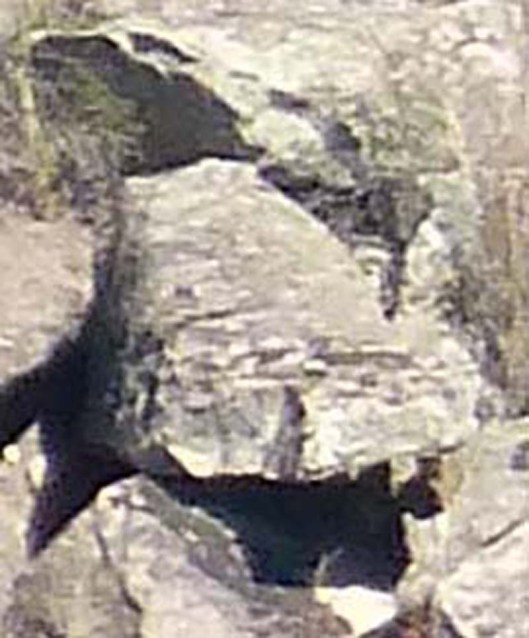 The Eagle owl is in one of these holes. See it?  No I don’t either.  Yeah, right, we’ll believe you Simon!

Several birds joined us at our last picnic spot, including this grey heron, which flew gracefully towards us after a while.

And then a troop (is that the word?) of Iberian magpies arrived at the same spot, and gradually made their way towards us, taking over the picnic tables as we left them. (Actually, the collective word for magpies is a murder, or a charm, or a congregation or a gulp. Take your pick.)

If it’s one for sorrow and two for joy, what do 14 magpies signify? (BL suggests for two secrets never to be told!) 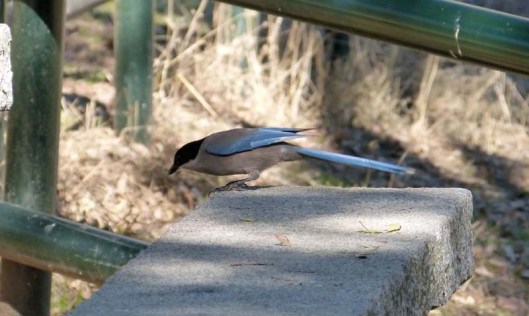 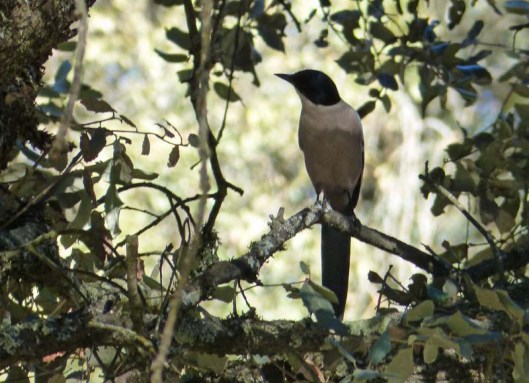 At the spot where we had seen the big fish, a kingfisher swooped along the river and under the bridge – no photo sadly – and these cormorants stood for a while and then took off.