I had planned to get this second post out yesterday, but I got distracted into the Laver Cup. Having taken out a Eurosport subscription specifically to see Federer’s final, historic match, it seemed not to take advantage of the chance to watch other matches.

Angela joined us on Monday, 12th September, as she did most. This was the day we went off the map to the north-west, via Loch Lochy, Loch Oich and the south west part of Loch Ness. We soon left the famous home of Nessie though, and went along a road parallel to the loch, to its east. (On the way we learned that almost every loch has its resident monster, or suchlike. Jon told us about kelpies, though he didn’t mention the steel ones at Falkirk.)

Our first stop was at Loch Tarff…

… where, despite appearances, it was very cold at the top of a small hill. We saw no kelpie, there or in any other loch that day. But we did see a dor beetle, the Scottish dung beetle.

On route to our next stop, no distance problems to see these sika deer.

Our next stop was Loch Killin, where we hoped to see a big bird or two. We saw a couple of buzzards, but no eagles.

I got a better picture than yesterday of a dipper though.

It brightened up during our pre-lunch stroll.

We rejoined Loch Ness. Directly opposite was the second most visited tourist attraction, after Edinburgh Castle, in Scotland. Hmm.

It became a little more recognisable when I zoomed in.

Jon told us we would next visit Loch Ruthven, which rang bells with me, and joined up some dots. I had visited it in June 2019, during my first stay in Grantown-on-Spey, on the eastern side of the country. I had then hoped, in vain, to see a Slavonian grebe. We did so this time, though right across the other side of the loch, only visible in a telescope. But we did see two kinds of fungus, shown here along with one we had seen during our walk along Loch Killin.

I forget the name of the first, the others being birch boletus and fly agaric.

From here we moved on to our last loch of the day, Loch Mhor. On the way we saw a lapwing,

and a red kite accompanied by two ravens.

Once at Loch Mhor we saw a hare, though it was rather distant.

Finally, on the way back to Glenloy, the sun going down, we passed through this lovely view, which, we were told, is called ‘Cumins Seat’, presumably with reference to the Clan Comyn/Cumming, which according to this article can have 18 different spellings.

Greylake Nature Reserve, owned by the RSPB.  I’d visited it just once before, and that only briefly. The prospect of a guided tour with birding experts, set up by the Somerset Wildlife Trust, and led by an RSPB volunteer, was too good to miss, so this was my third outdoor outing this week in near freezing temperatures. 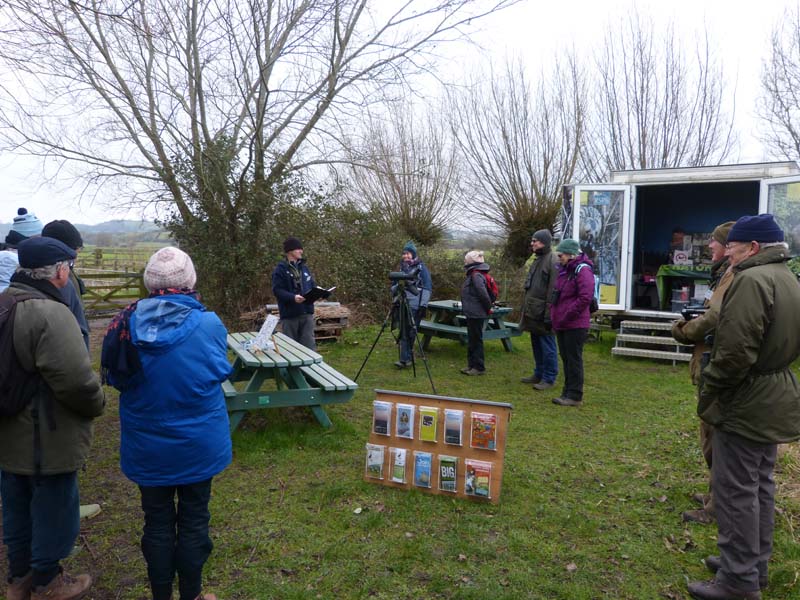 The briefing told us that the land had been in cultivation until 2003, when it was bought by the RSPB and converted into wetland for wildlife.  We would make our way to the main hide, where we would spend about half our time, and then walk around those parts accessible to the public.  Most of the area was kept behind electric fencing for the tranquillity of the birds and animals.  It was good to come at all times of the year, but this season was the best time because of the thousands of different birds over-wintering there.

On the way to the hide, I managed to get an indifferent picture of a fieldfare.

Once at the hide, we had this general view ahead of us.

Looking round, and closing in a little with binoculars and camera, here are other aspects. 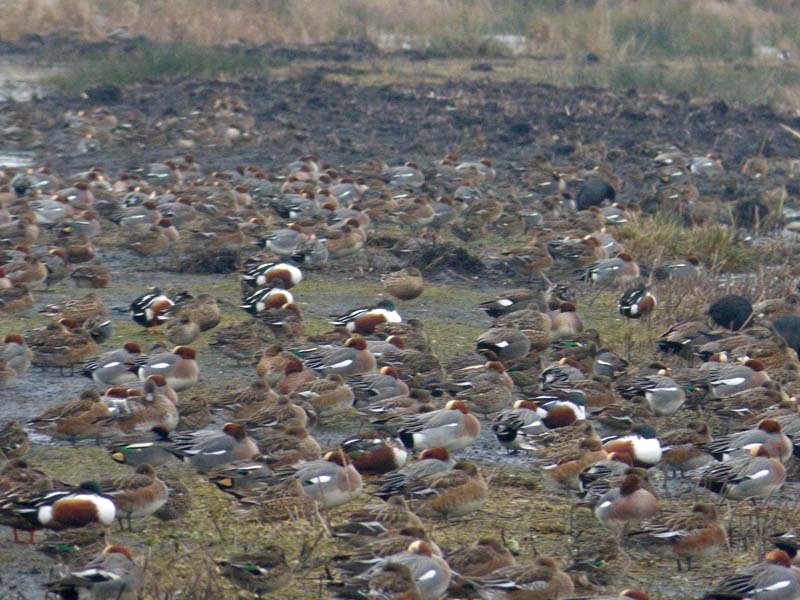 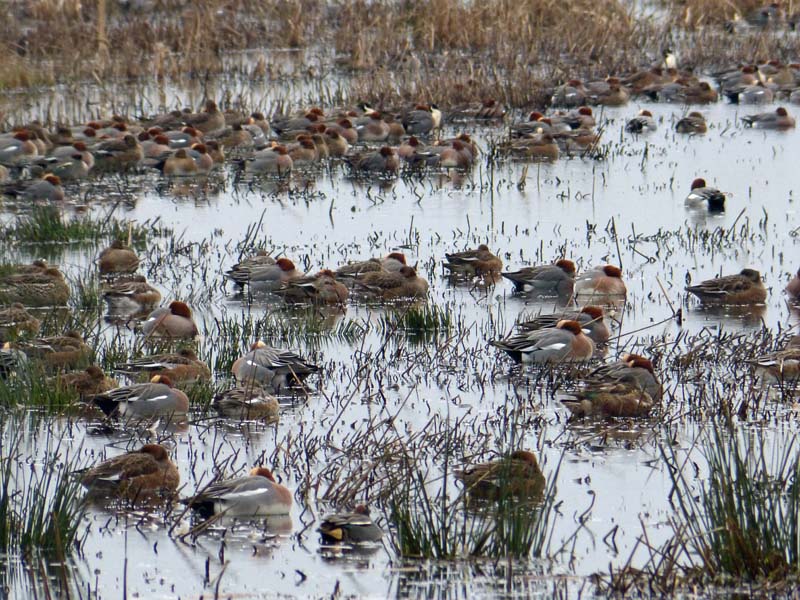 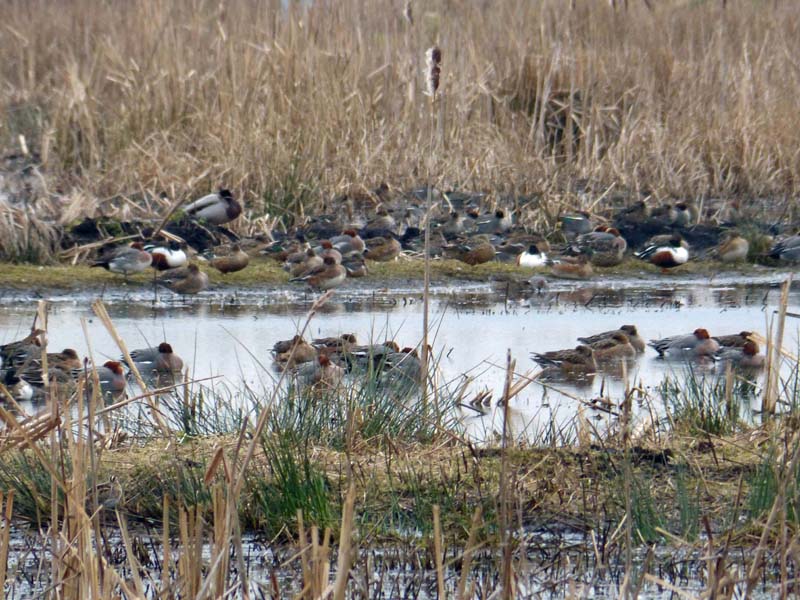 Experienced birders were soon exclaiming at this clump, just 20 metres or so from us. 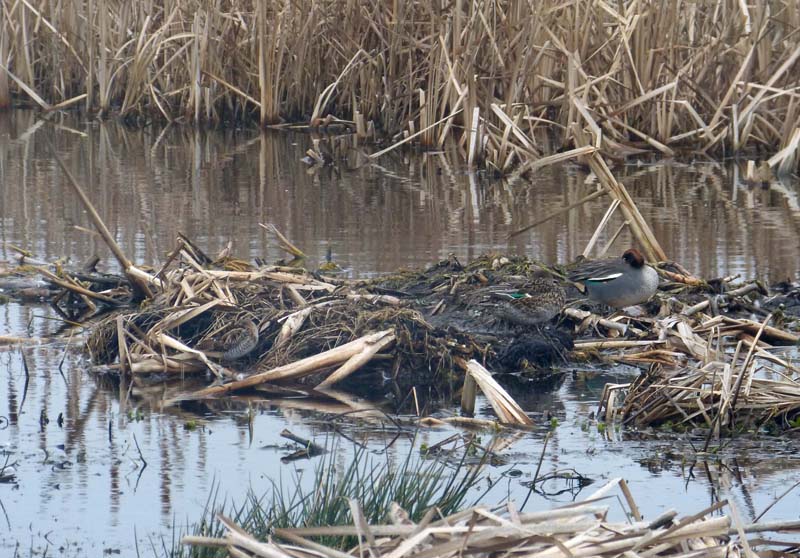 A pair of teal can be seen easily, especially the male.  But are there really snipe there? And four? 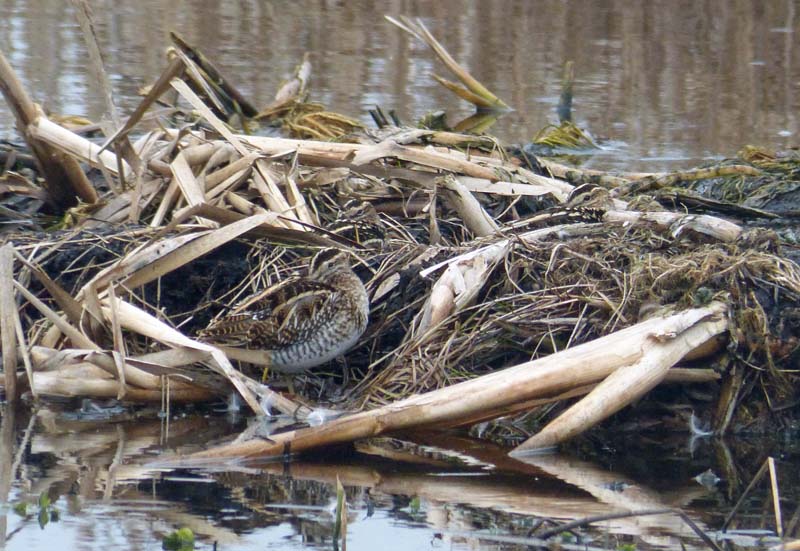 In due course I managed to find three, and indeed once you knew that they were there, it was even possible to pick the nearest one out with the naked eye, they were so close.  But what wonderful camouflage!  They didn’t move the whole of the time we were there.

It was not possible to get photos of all the species we saw, but here are some. (If birder readers wish to comment with further names, or corrections to any of these photos, above and below, please feel free!)

Shovelers, the male’s bill demonstrating just why they bear that name. The female has the same bill, but that is hidden here.

I just love lapwings, (also known as peewits) for their green iridescence, their cheeky crest, their wonderful courtship flight, their flappy way of flying (I call them flapwings).  This one all alone entertained us close to the hide for ages.

And as at Ham Wall, there was a Great white egret in the distance.

Three in fact. and here is one of the others flying around

Not long after leaving the hide, and keeping to the established path, we were shown by one of the RSPB volunteers, to the right of the path, some otter poo and some mink poo, the former more welcome than the latter.  The otter spraint was on a well-established otter path. 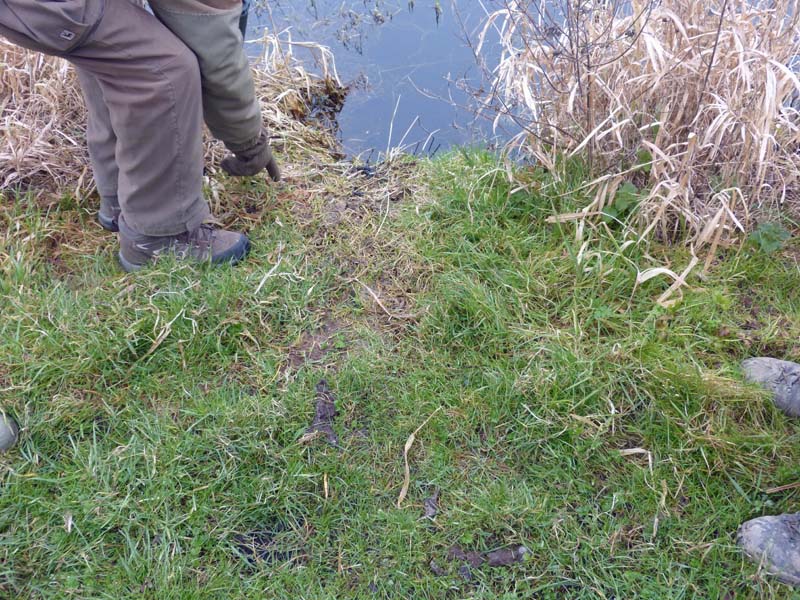 To the left, the other part of the otter path could be seen.

We were pleased then to see crowds and crowds of lapwing flying around, as if there had been a signal to the thousands in the area all to rise up at once. Here are just a few of them. 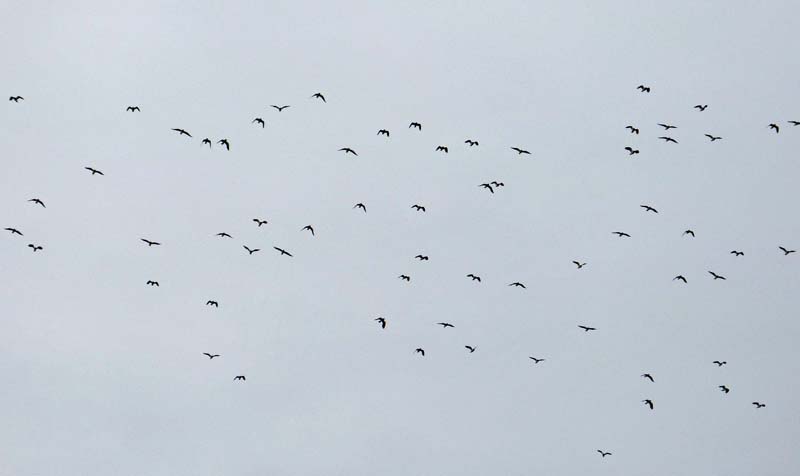 Swans have no need to fear humans, and they know it. This one made for an easy photo, just a very few metres away from where we were walking.

A distant view of another great white egret. 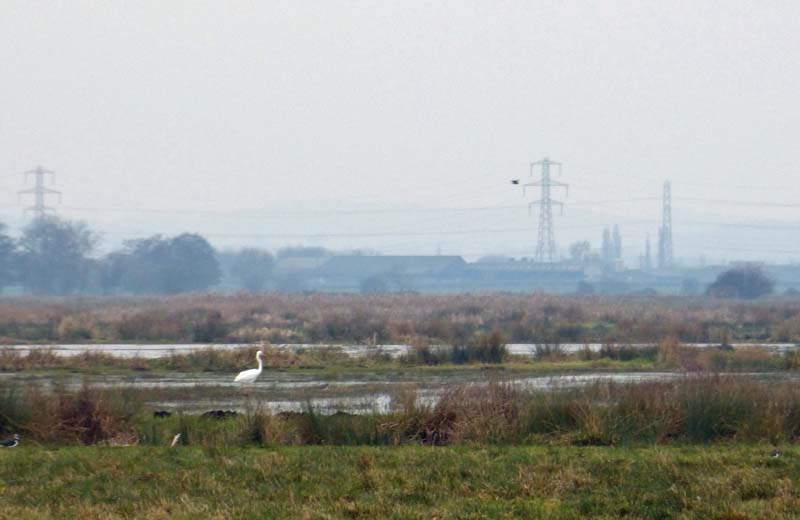 And of a sparrowhawk kill. 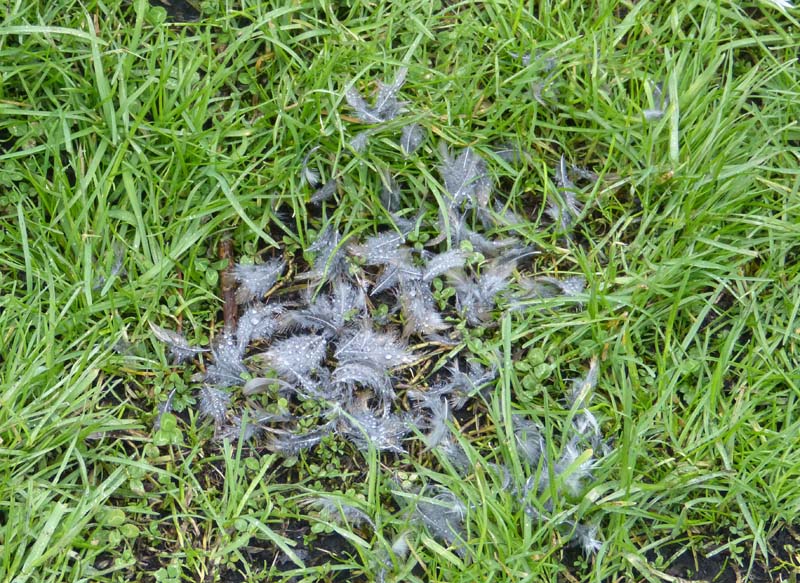 We hoped to see more small birds, and indeed we did see redwing, and stonechat, but I couldn’t get photos.  We went on to a viewpoint:

But few wetland birds were favouring this area of the reserve.

Perhaps, along with the small birds, they were favouring the more sheltered areas on this chilly day.  But I, usually spending far too much of my life in front of a computer, had really enjoyed my three outdoors outings this week.  I must do it more often, and certainly return to Greylake at other seasons.