Not meaning the way Glastonians do things, (that’s way beyond my comprehension!) but a waymarked walking route created a few months ago, with finance from the Towns Deal, and expert contributions from Glastonbury Town Council, Mendip District Council, (soon to be abolished, as Somerset County Council becomes unitary) and a host of volunteers.

My friend Zoe and I have done it in two parts as our first Friday walks in September and November, and I thought I would write the two walks up in consecutive posts. (It was Zoe’s turn to organise our October walk.)

The Way starts at the information office in the centre of town, but it suited us to start from my house on the edge, and to pick it up somewhat before Point 2. (The Way’s Facebook page of the Way is headed by a map. There are two sets of numbers, mostly coinciding but not always. I think the alternative set is something to do with the ‘mystical’ side of Glastonbury, which does tend to escape me. My references are to those preceded by ‘B’,which I think stands for ‘board’.)

As it happens, we walked back to my house after lunch past the official starting point at the Information Centre, and here is Board 1. A plan of the walk is bottom left, and that day we did (most of) the western circuit.

The walk is described in some detail in an app, (‘The Glastonbury Way’) which also gives all the information supplied on the boards, in writing and aurally.

We joined the Way at Wearyall Hill, (sometimes written as Wirral). The origins of the name are unknown, possibly coming from the legend that Joseph of Arimathea came to Glastonbury bearing the chalice used at the Last Supper. He is said to have arrived by boat (Glastonbury then being an island, or perhaps a peninsula, in the middle of marshy, swampy land) and, weary, he planted his staff in the ground, which became the famous Glastonbury Thorn, of which a sprig is given to the monarch on Christmas Day to decorate her breakfast table.

At the end of the ridge which is Wearyall Hill we came to Board 3.

At useful, and usually rather scenic, points along the Way there are welcome seats.

Down from Wearyall Hill, you can still see the Moors (aka Somerset Levels), the fairly recently opened Premier Inn to the right, and on the left the old Morland (‘Bauhaus’) factory, now known locally as the Zigzag building, which is in the process of renovation and new purposes.

Some features on the Way have been around for a long time.

though it’s not even straight.

Pomparles Bridge crosses the very busy main road linking Glastonbury to Street, It’s name is a mutation of Pons Perilis, assumed to mean bridge of peril, (though if it does, it must be a mediaeval abbreviation of the classical latin word, ‘periculis’.) The app tells us that ‘Its name is related to Siege Perilous, the seat at King Arthur’s Round Table kept for the knight destined to find the Holy Grail but fatal for any other occupant.’

The River Brue was incredibly low that September day. I have never even seen the grasses above water level, let alone laid down like this.

Nor have I seen elsewhere any sign saying in effect ‘beware of the badger works’! This was after we had crossed the busy road at, fortunately, a lights-controlled pedestrian crossing.

‘Bride (pronounced ‘Breed’) was one of the most widely worshipped goddesses in Celtic Britain.’ Archaeology shows that there was a small chapel on the site of Bride’s Mound, and also a cemetery dating from Romano-British times. 12th and 4th century writings say that St Brigid of Kildare visited Glastonbury in 488 AD, and spent some time here.

At this point we were following the river bank, and theoretically we should have been able to follow signs right, across to Bride’s Mound, subsequently retracing our steps, but we couldn’t find those signs. Pity, because in 10 years, I have not yet seen the Mound.

It was extraordinary to see the banks of the Brue so deep, due to lack of water. Water levels across the entire Somerset Moors and Levels are incredibly closely managed by the Somerset Rivers Authority.

Came a point where we were a little perplexed as to where to go, as there appeared to be a kink which did not appear on the plan. But we trusted to the waymarks and all was well.

A lovely spot for a picnic lunch we thought – though we were planning to eat at a pub.

The explanation for the creation of the pleasant spot however was sad.

It was perfectly possible to read Board 8 – but impossible to take a photo of it in its entirety.

We shortly came into a light industrial area, and as we neared the centre of town, we cut a little away from the Way’s official route, to make more directly for our lunch place. We passed my doctors’ surgery.

And ended up at the ‘Who’d a Thought It’, just off the Market Place, where we had a good lunch, and also a discussion with the innocent waitress as to whether it was really necessary to wrap our cutlery and paper napkin in horrid little plastic ties, single use to boot. (I will get around to that Glastonbury Mural Trail some time.)

The walk back to my house took us through the Market Square. The official route, in effect starting part 2, would have taken us up the High Street, off right in this photo. I have blogged on that previously.

The weather forecast yesterday afternoon indicated that there should be two hours when I could get out for a walk without getting drenched, so I grasped the opportunity with both legs – while covering the rest of me with a waterproof just in case. To the bottom of my road first, where I was not surprised to find that the nearest bit of the Somerset Levels (technically Somerset Moors here) due south was waterlogged, as it frequently is at this season.

Up Cinnamon Lane to the very busy National Freight Route A 361, east-west at this point, crossing which involves taking your life in your hands.  But there is no alternative if one wants to walk up or – as I did yesterday – around  Glastonbury Tor.

In essence my walk was to be a clockwise circumnavigation of the Tor, which is 158 metres at its highest (plus tower), and Stone Down Hill.   The waterlogged fields were at about 5 metres above sea level, and my walk took me to about 50 metres maximum.  Higher ground was to my right and lower to the left.

In Wellhouse Lane this is to be seen on the side of one of the few houses there.

Off left onto Lypyatt Lane, with a right and backward glance to the Tor and its tower, the only remaining part of the 14th century St Michael’s Church, of which the rest was demolished at the Dissolution of the monasteries in 1539.  (An earlier, wooden, church was destroyed in an earthquake in the 1275.)  Read more here. 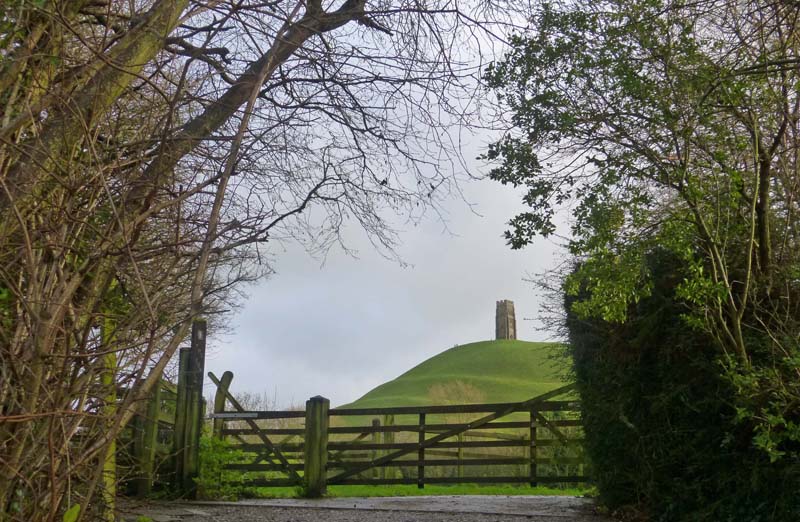 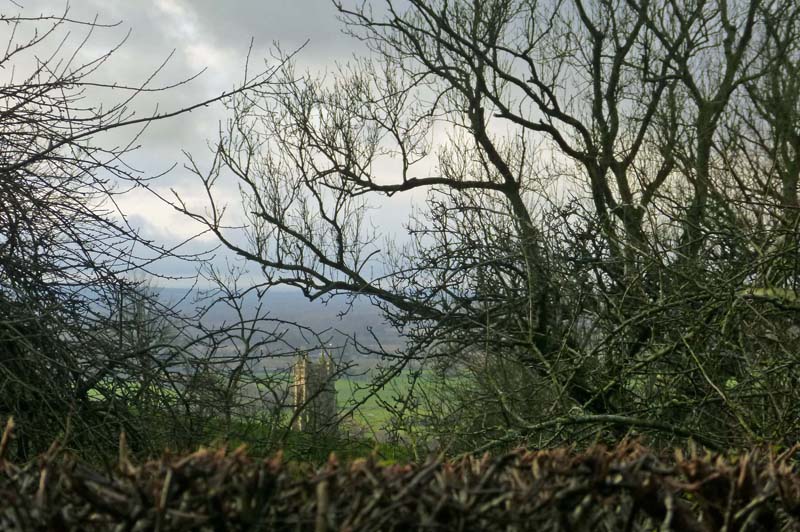 and more of the town of Glastonbury

On the bank to my right

Occasionally the low-lying sun came out, giving splendid effects, straight ahead of me this time

But mainly the weather was gloomy 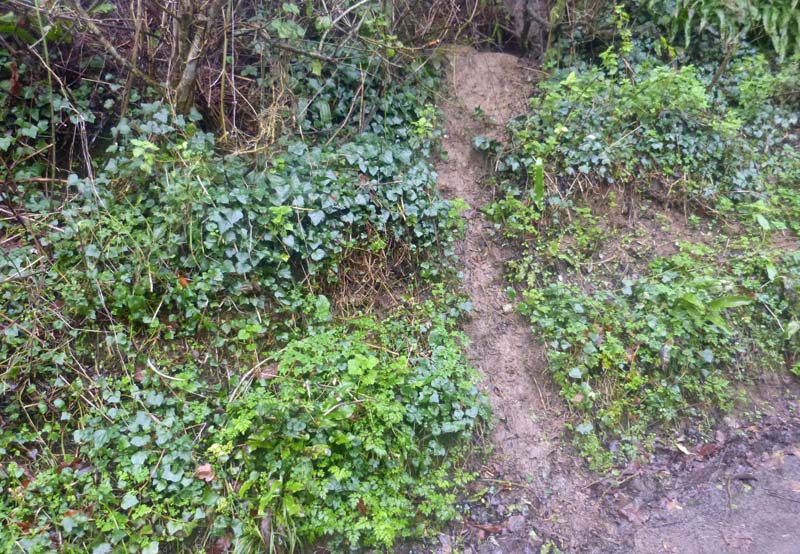 No doubt a badger track up the bank

To my left is now pretty well due north, towards Wells

Rain coming in from the Mendip Hills? Fortunately it turned out just to be hanging cloud.

My walk next took me through Paddington Farm which is a working organic farm providing free educational facilities, especially for disadvantaged children.

Once past the buildings, I left farm tracks for very soggy fields. 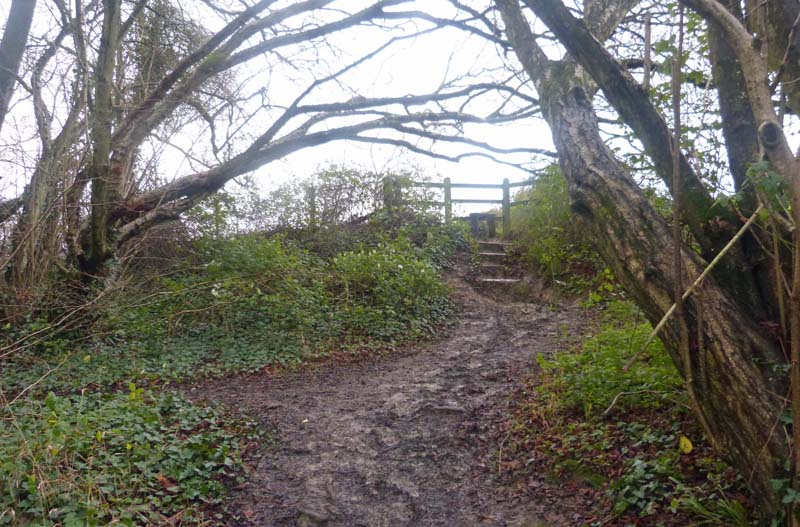 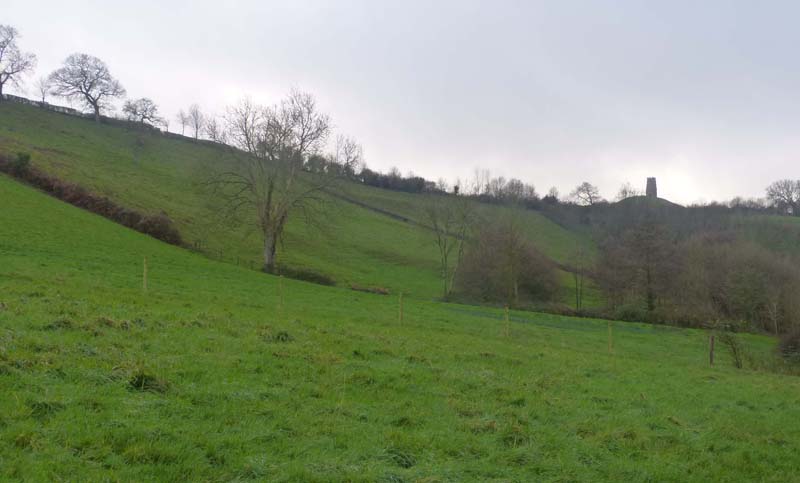 Kissing gates from now on – thank you Mendip District Council 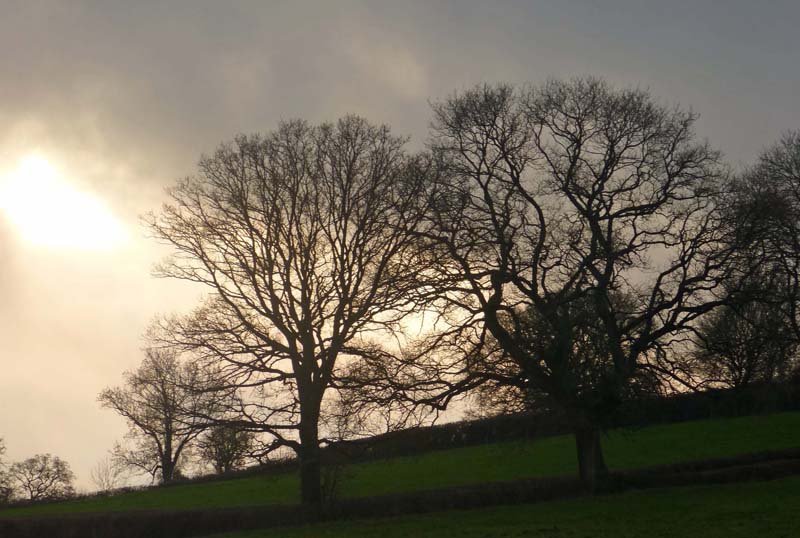 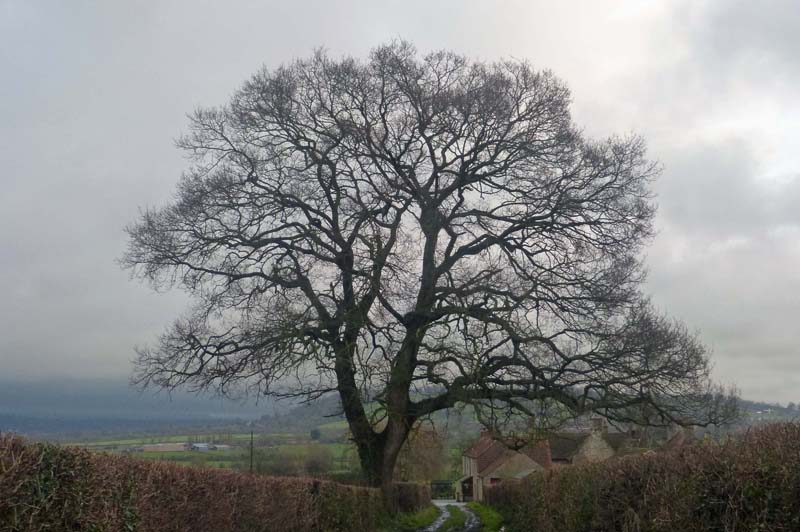 The two small cottages are called Gog and Magog too.

Norwood Park Farm is now a dairy farm. The house is Grade II listed, and was built in 1457 for the privacy and sport of the Abbots of Glastonbury. They had it alright, abbots, in those days. 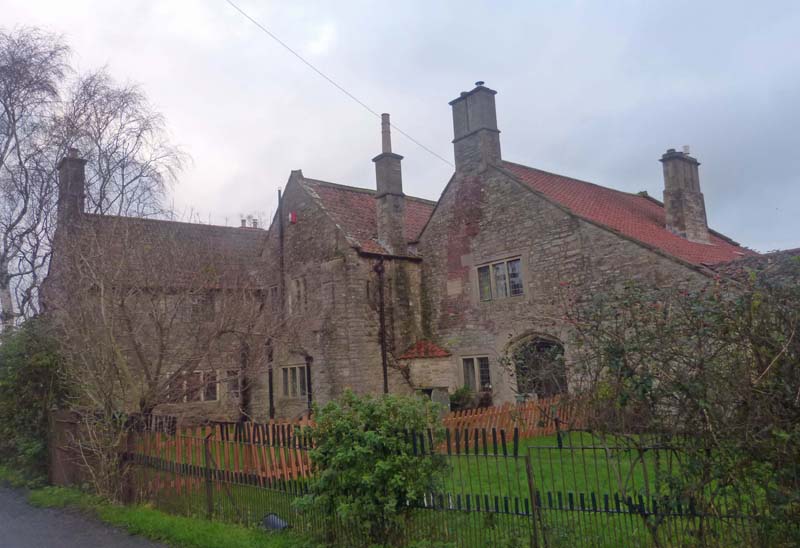 The top of the Tor peers over Stone Down Hill

West Pennard over to my left 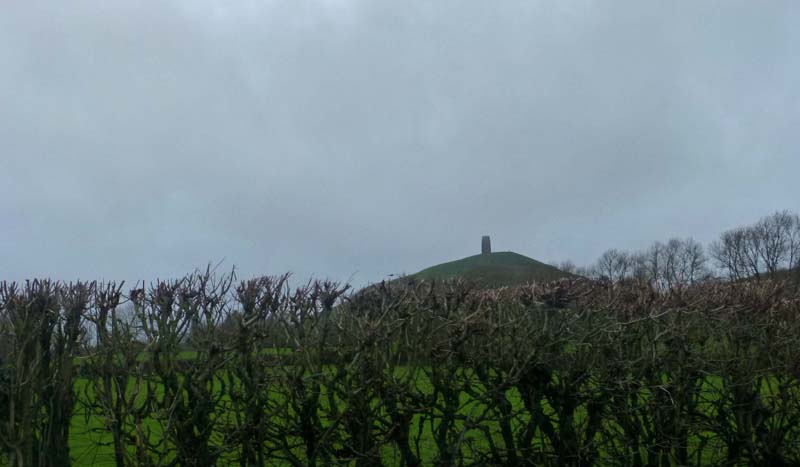 Unfortunately, 6 minutes of this circuit involve walking back along the aforementioned noisy and busy A361, at the point at which it goes alongside Millfield’s Preparatory School. Needless to say, traffic does not respect the 40 and 50 mph speed limits. 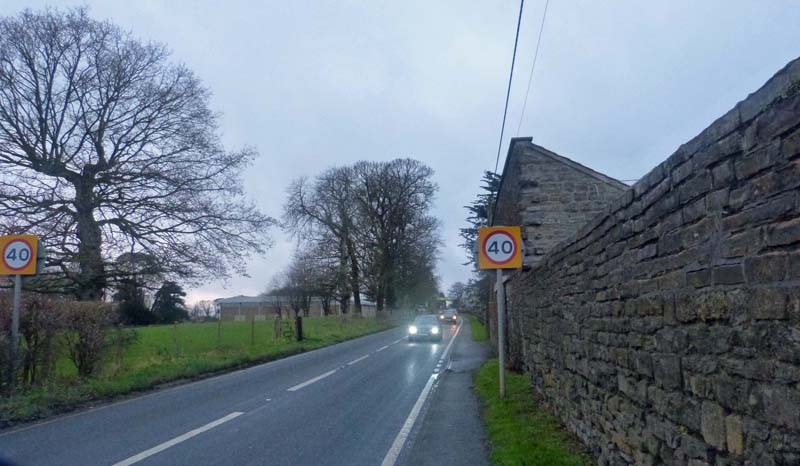 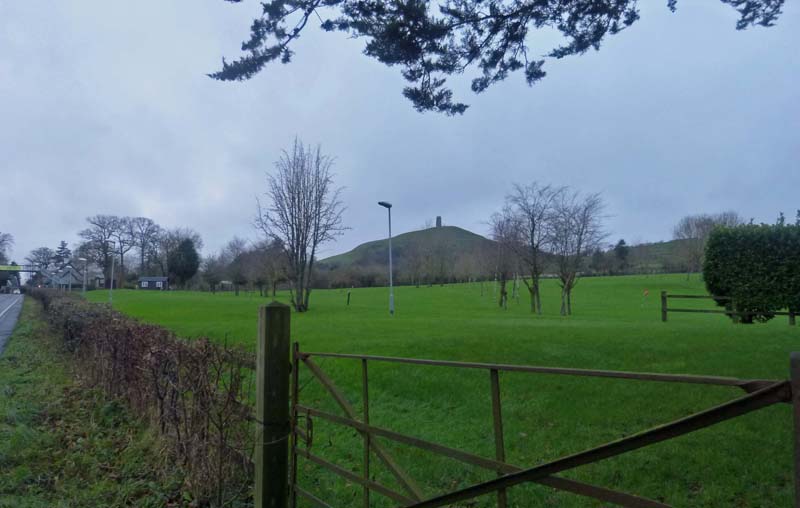 The children have a bridge they can use to cross the road, but this is not accessible to the general public as far as I know, and once more I took my life in my hands.

Once over I was able to look back to my right for a further view of the Tor, and then I noticed, not for the first time, that spring seems to be well advanced. (Or winter never really came, though there’s plenty of time yet.) 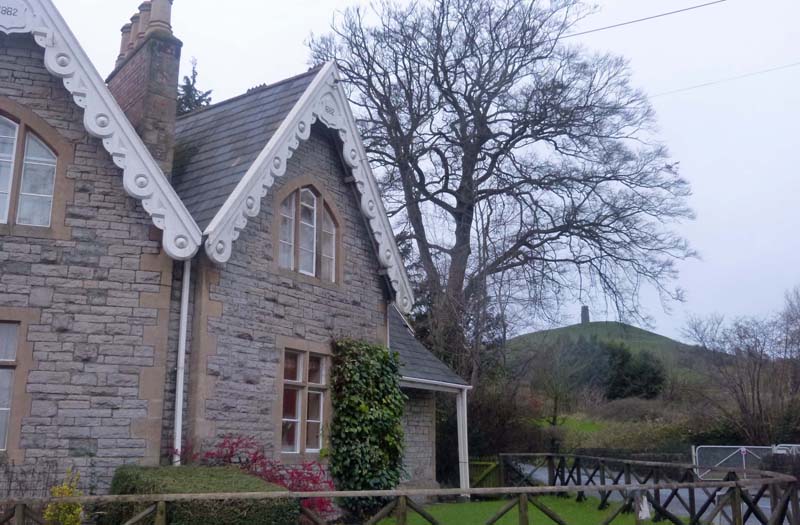 Over to my left, to the south, as I embarked on the last few minutes of my walk, I could see the Polden Hills, the lowest range in Somerset.

And of course, the Tor was still to my right.Those last few minutes of my walk were pleasantly prolonged as coming in the other direction was my friend Neill, custodian of the Glastonbury Antiquarian Society’s website.   He entertained me with an account of the earliest local excavations of the Tor, by one John Skinner, in the early 19th century.  Extracts from Skinner’s Journal here.

While we chatted it started, and stopped, fine drizzling.

When I set off again, a yellow helicopter circled for a minute or two, 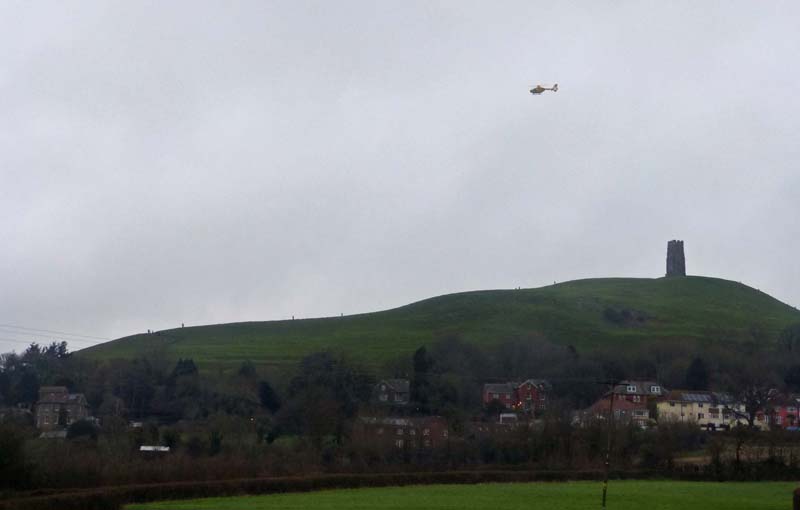 I passed a huge bonfire, 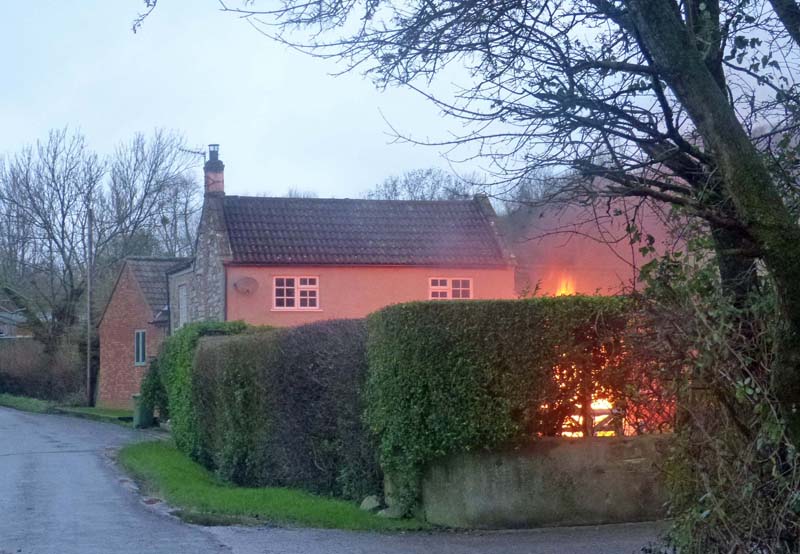 Two men were standing by…

and I took a final look at the Tor between two of my neighbours’ houses.  It started raining shortly afterwards as night fell.