Thwarted by a dead computer, it is only now that I can write up a very enjoyable day spent nearly two weeks ago with my ‘American’ cousin Geoff, his two daughters, Claire and Sophie, who live in New Hampshire, and his mother, Barbara, who lives in Berkshire. Sadly a last-minute problem meant that Geoff’s wife and their son were unable to make it over the Pond, so the party was somewhat depleted.

We had arranged to meet up in Wiltshire, as being about halfway between where I live, in Somerset, and Berkshire. Caen Hill is near Devizes. (‘Caen’ is pronounced ‘Cane’, not like the French town.) It is best known for its 29 locks, and in particular its ‘flight’ of 16, engineered by John Rennie the Elder and a scheduled monument, on the Kennet and Avon Canal, which links Reading and Bristol.

Constructed between 1794 and 1810, it was not long before the railways were serious and stronger rivals. Through lack of maintenance, most of the canal had become unnavigable by the mid-twentieth century. Some 35 years ago, when I was living in Reading and mad keen on canalling – and I still could be – I was a member of the Kennet and Avon Canal Trust, which had been formally constituted in 1962 from an informal group to bring the Canal back to life. Much of it had been restored by then, but the Herculean task of the flight had only just been started upon. The only time I had visited Caen Hill, before this month, had been in the 1980s, and it was then in a sad, derelict, sorry state.

Total restoration of the canal and all its works was not complete until 2003, but it was fully navigable by 1990, and formally reopened by HM Queen in that year. The first boat to do the complete trip was that of Sir Timothy West and his wife Prunella Scales (‘Great Canal Journeys‘). They had been founder members of the Trust. (And as it happens, I came across them as they were canalling near Hungerford in 2005, and drove them in my car to A and E at the Royal Berkshire Hospital, Reading, but that’s another story.)

I had last seen Geoff and co in New Hampshire in February 2018, and Barbara this January, so there was quite a lot to catch up on. We wandered downhill in one direction.

Every lock was dedicated to someone or some group.

As we walked back up to our starting point, Geoff and the girls helped two women holidaying on a hired boat. It’s so good to have someone to do the locks!

As we went back up we had a good view of that central flight of 16 locks.

After lunch at the Trust’s café, we had a pleasant walk uphill into the town, with the intention of going round the Wadworth Brewery.

Unfortunately, when we got there we found the afternoon tour was full. So we sat around for a few minutes in the entrance hall, and reflected on what to do next. There were exhibits, including a rather detailed one on the beer-producing process – and lots of different beers on sale in presentation packs.

We decided to meander the mile back to the locks’ cafe, and to have a Marshfield (West Country speciality, highly recommended) ice cream, before dispersing.

A lovely family get-together, blessed by the weather.

USA 2018 (4) A day with Nicole, and then moving on. Thursday and Friday 15th/16th February. Fewer photo opps, but no less enjoyable.  Well, the Thursday anyway.

Nicole first took me to the New Hampshire coast.  The state’s coastline is only 19 miles long, but it has some historic connections.  We started at Hampton Beach, 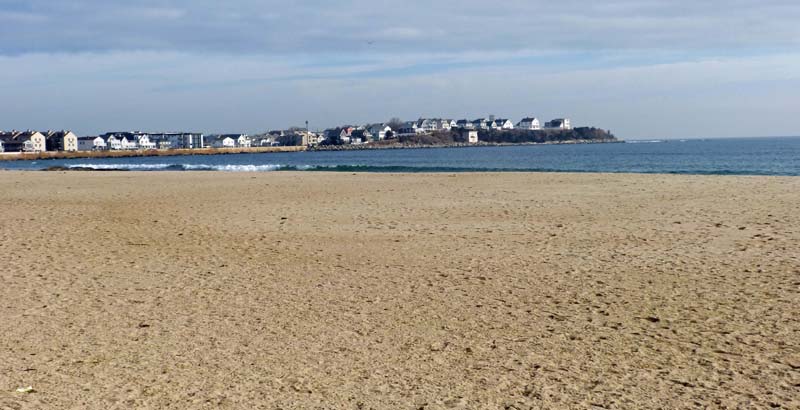 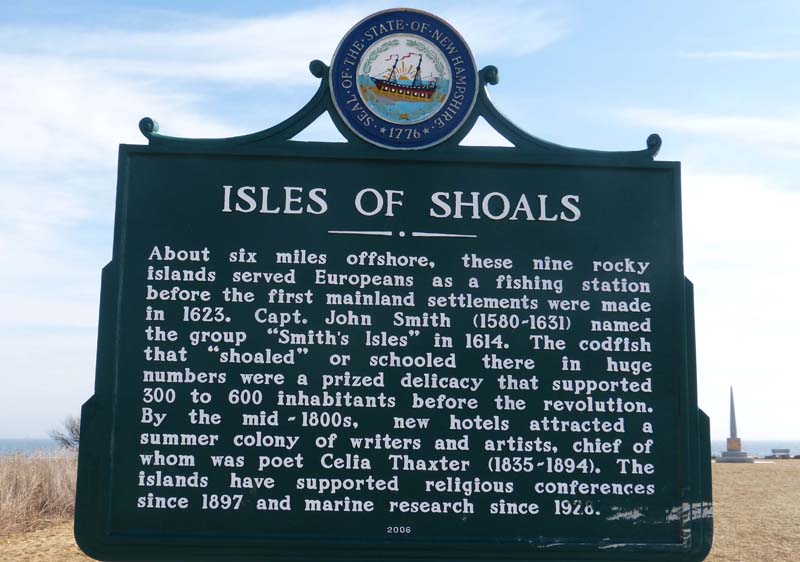 to Portsmouth, where we had coffee (not nearly as good as Geoff’s!) in a Dunkin’ Donut, before moving on to Durham to pick up their older daughter, Claire, who is in her first year at the University of New Hampshire, reading maths and really enjoying the chance to be with others who love the subject.

Back to Portsmouth, where we had a delicious lunch at a seafood place there.

I had lobster roll, and clam chowder, which I would never have know to choose from the extensive menu without my relatives’ help.  Lots of natter, a wander around the port, 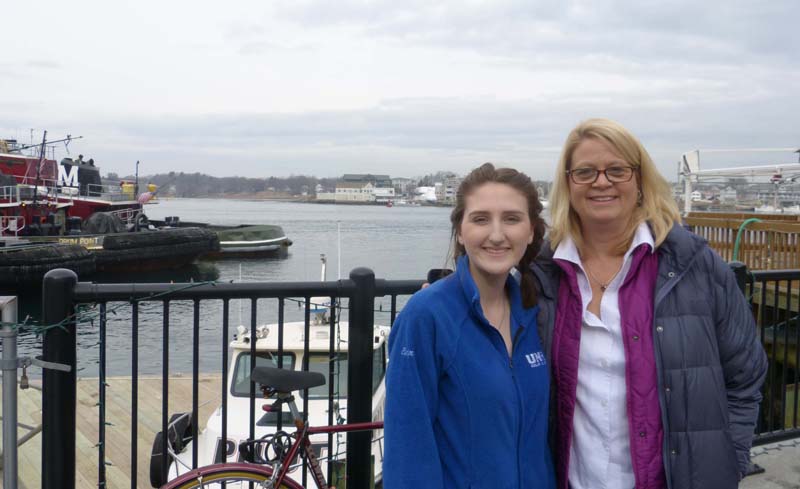 back to Durham to deposit Claire,

A historic submarine on display

Hall of residence – called ‘dorm’ there.

and back to Bedford.

I know. Bedford, Manchester (a former cotton town), Lincoln, Portsmouth (a port), Durham, all within not much more than an hour or so of each other! And all inside (New) Hampshire!

I didn’t stay up too long, as I was to have another very early start and stretched day on the Friday.

Geoff drove me to Manchester Airport to catch a 6 a.m. plane to Newark, there to change for Denver, Colorado, where I was to catch a flight after a four-hour wait to Jackson Hole, Wyoming, two time zones further westwards across the States from NH.

I think this was at Denver, but perhaps it was at Newark.  Anyway, delighted as I was to see this, I was glad not to be flying in it! (Though in other circumstances…)

The first two flights went fine, but there was an hour’s delay before the third took off. The reason? Just a broken seat.  But as the flight was 100% full, it had to be repaired before take-off.  As a result, and there was also of a slight muddle – no-one’s fault – over where the taxi meeting me was to take me to. So instead of arriving with an hour or so to spare before meeting all my companions for the next 6 days, I was technically 30 minutes late. The briefing over dinner had started – though I missed little I was told, and the meal hadn’t actually begun.

Once at the hotel, the Lexington, where I was to sleep, I was able to examine the cold-weather gear the company – Natural Habitat – was lending me for the week, including these absolutely excellent boots!

Only 21 hours  between rising and getting to bed this time.

USA 2018 (3) A day with my cousin. Wednesday 14th February.  Geoff had kindly taken time off work to be with me from midday on. Again rising later than the rest of the family, I had an enjoyable morning watching antics at the bird feeder. 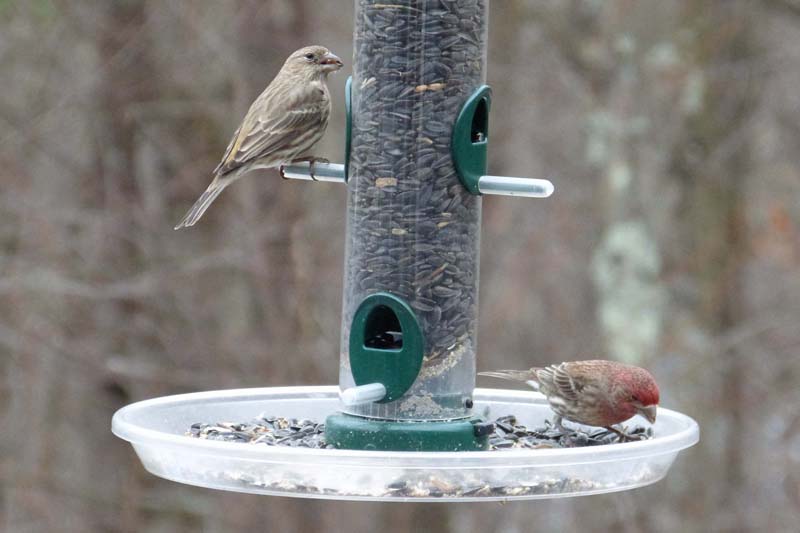 Mr and Mrs Mourning dove (rather smaller than UK doves)

But it was not only birds. The following sequence is a compilation of many attempts by the same squirrel. 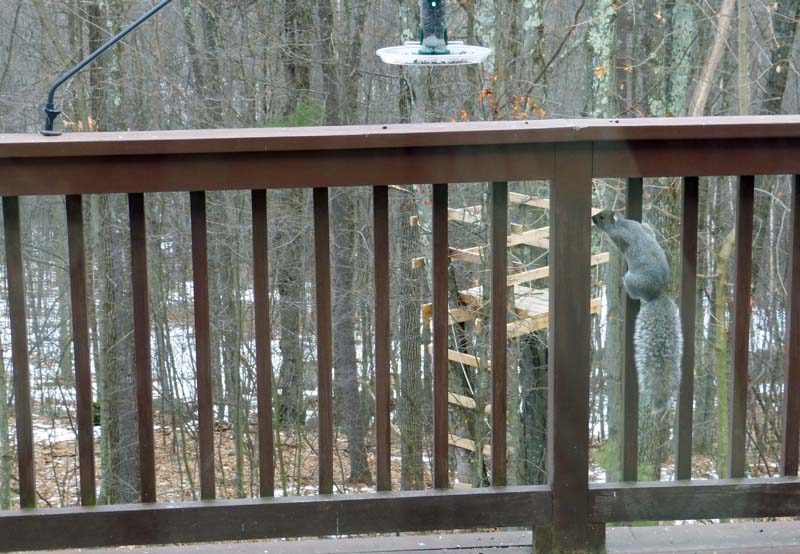 Shall I try jumping? (It’s a long way down!)

I’ll have a scratch and a think 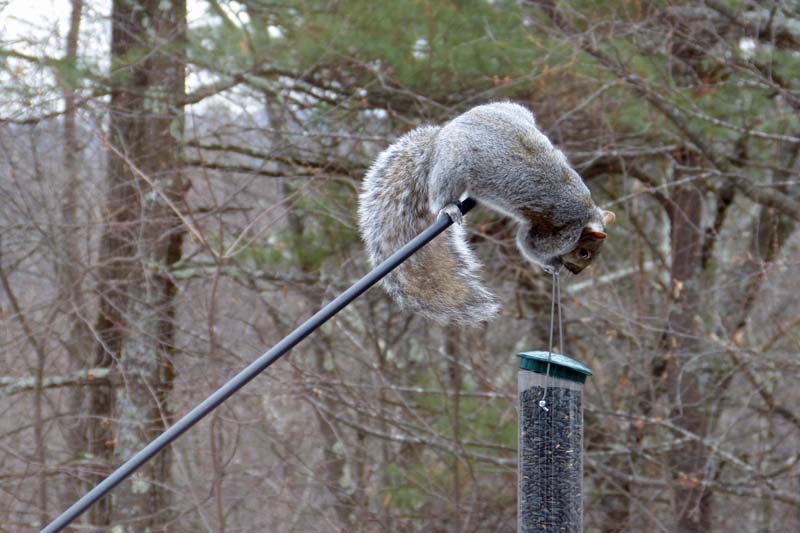 (But as this photo shows, the following day…) 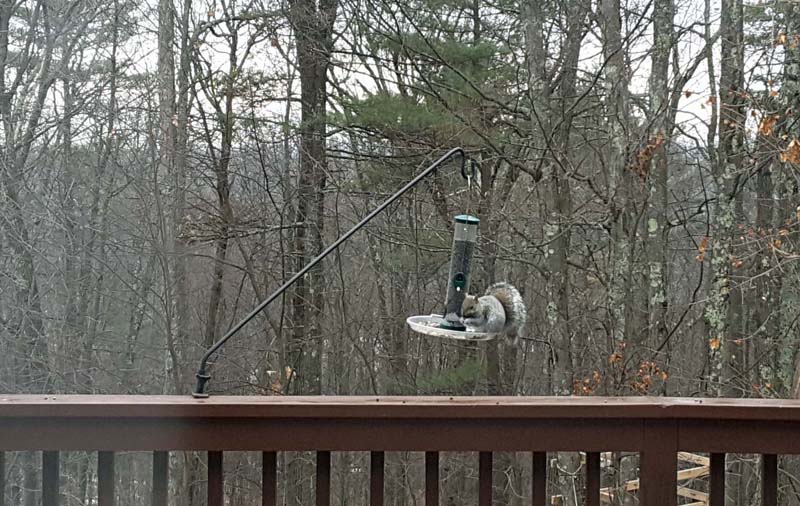 It was of course a great pleasure to get to know the affectionate Coco and Bam, sister littermates. 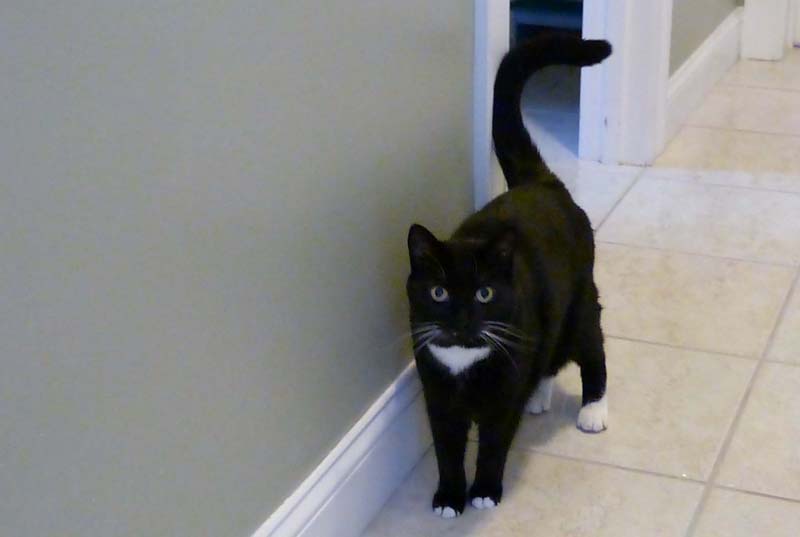 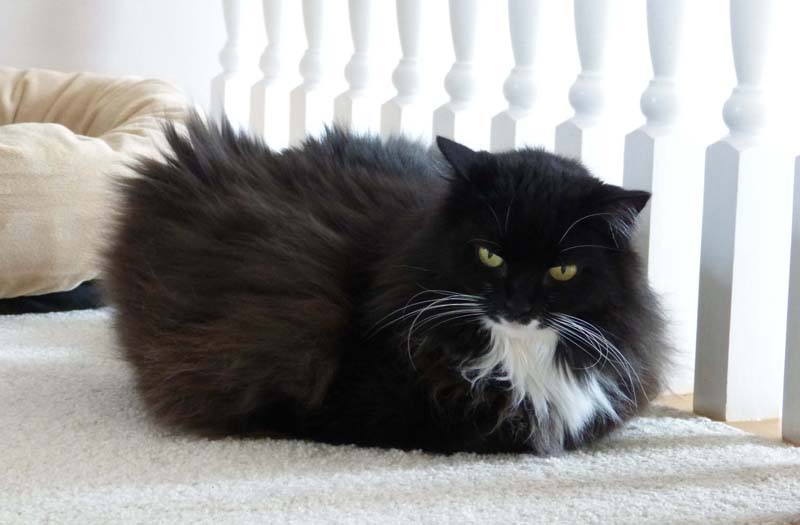 After an early lunch, Geoff and I set off on some local errands, including visits to a bank in Manchester for me and to their younger daughter’s school for her, and then headed northwards, while not leaving the state of New Hampshire.

Geoff had offered me the chance to see a covered bridge, once frequent but now sometimes preserved as historic features. 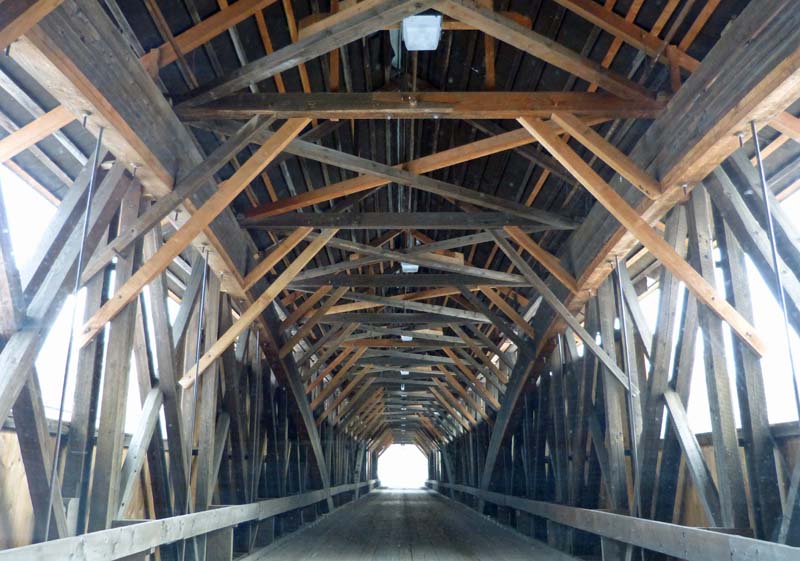 The bridge went over the Pemigewasset River

We were due to visit an attraction, the Ice Castles at Lincoln, later on, and swung by them now, in full sunlight.

Other attractions there included a collection of trains.

Geoff then took me to the Flume Gorge at Franconia Notch State Park, where we took a short walk. I was not really shoed for more, but was very grateful to be wearing Nicole’s parka. Lovely to walk amongst such thick snow. 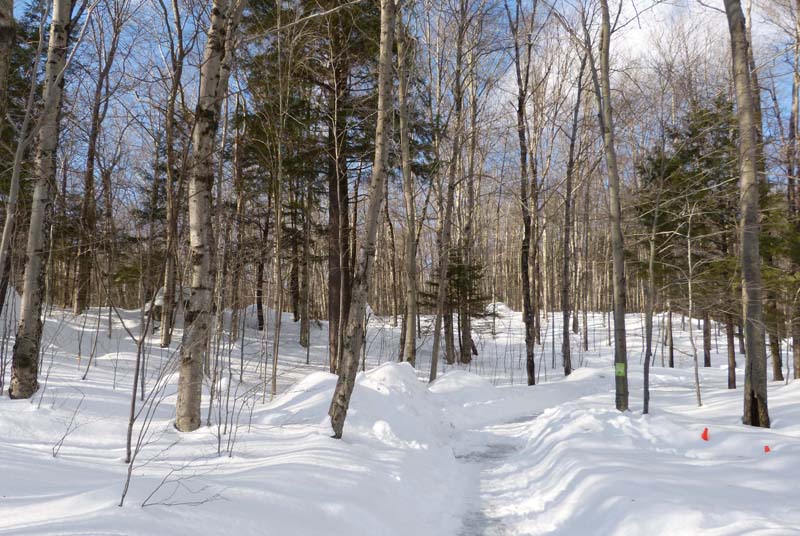 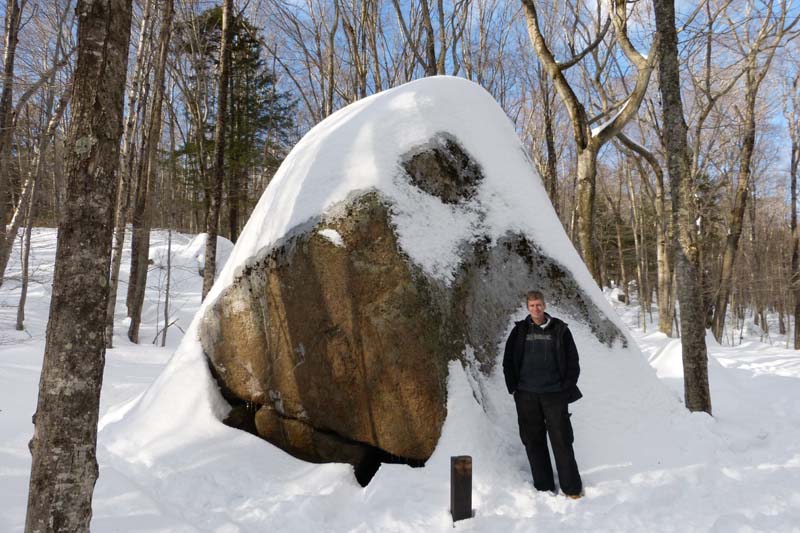 Erratics abound (and to be clear, an erratic is a geological term for a boulder where it shouldn’t be, moved there by glaciers!)

Another covered bridge, a serendipitous find, to which we did descend

Then on briefly to see Mount Lafayette, from a distance,

where we rang Geoff’s mother in the UK from the car, lost the signal, and picked it up shortly afterwards. As one not quite as familiar with technology as the next generation, I found this easy and clear contact all very weird – and it was free!

After taking coffee and dessert back in Lincoln, we kept our appointment with the Ice Castles. 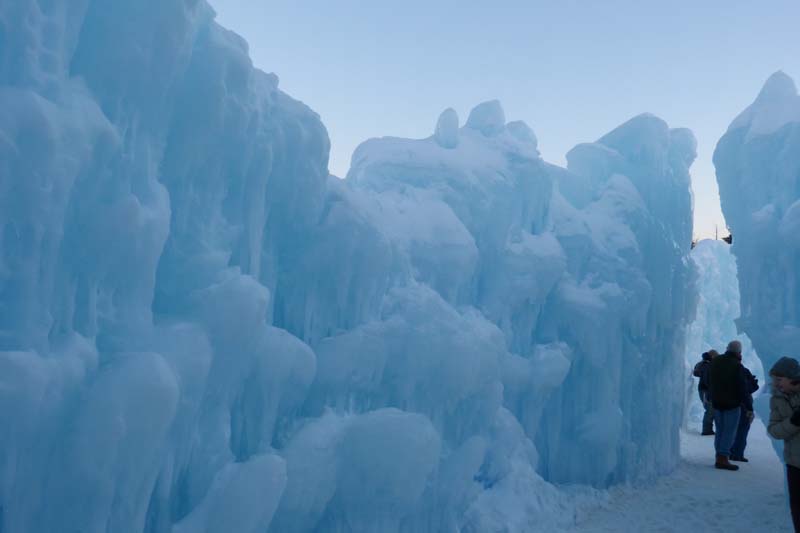 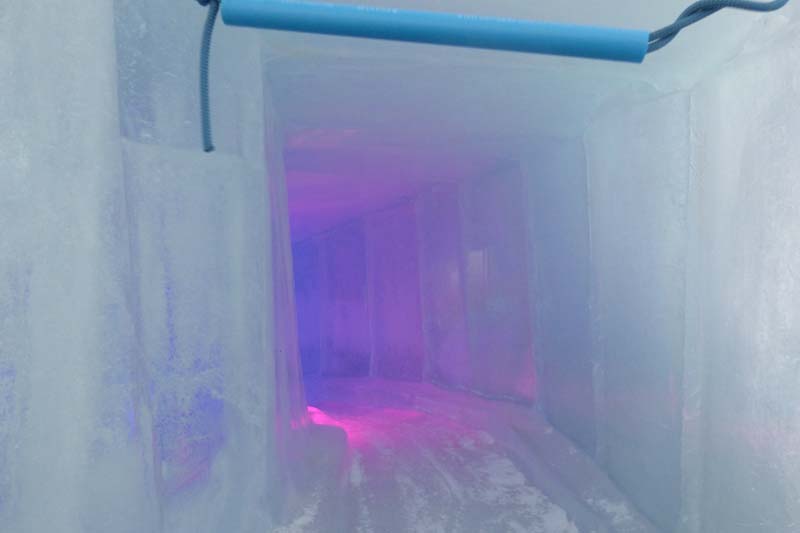 which I did enter 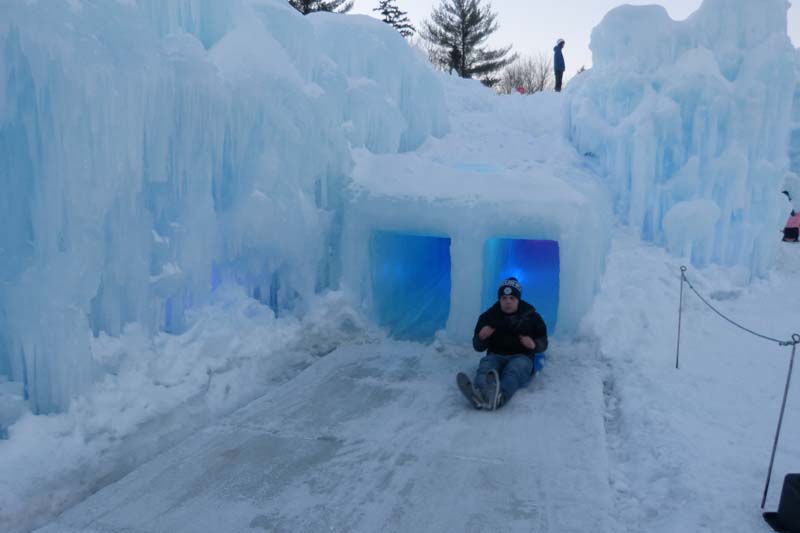 but which was much, much steeper than I expected, and from which my exit was not nearly as elegant as this. I wished I had taken a video – but not enough to choose to do the slide again! 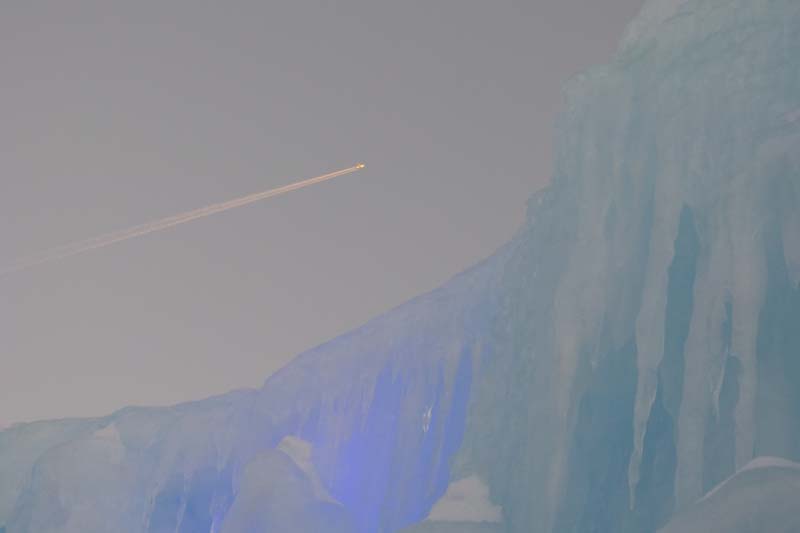 I did wonder about elf ‘n’safety – what if one of those icicles fell on one’s head? 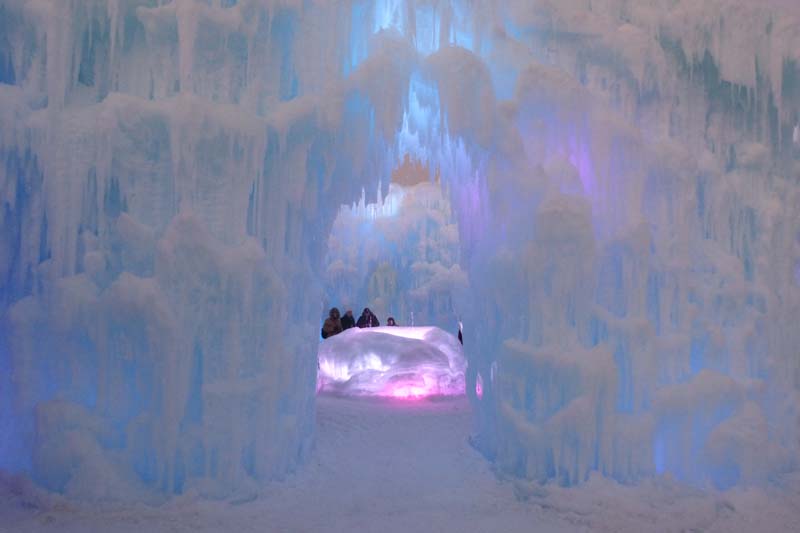 Nightfall is the most popular time to visit. 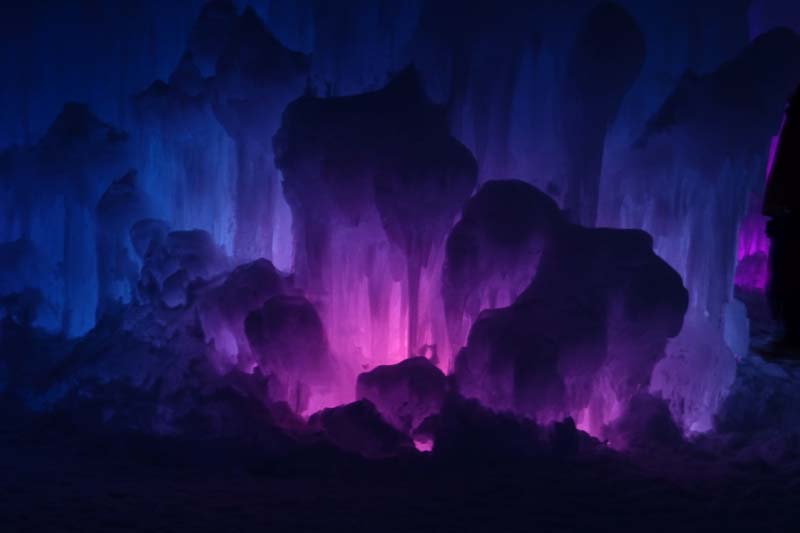 Thanks, Geoff, for a great day out!