Last day in Seville.  I only had the morning.  I walked to the flamenco museum, the Museo del Baile Flamenco (baile is ‘dance’), just a few minutes from my hotel, and as I bought my entrance ticket, I regretted that I would not be there that evening to go to a show by the national flamenco dance company, (while not regretting my inability to attend the classes they offered!)  It being early on a Monday morning, I had the place almost to myself.  The first room in the museum had giant screens showing videos of various aspects and meanings of flamenco – I had no idea that there was so much subtlety involved. 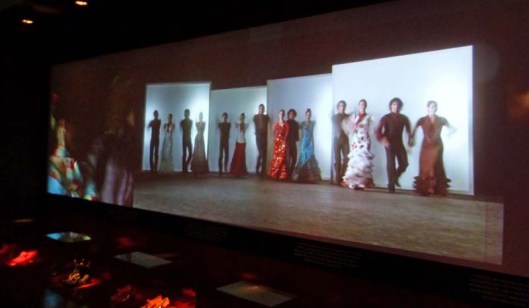 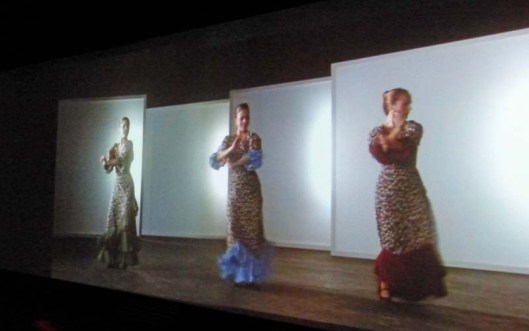 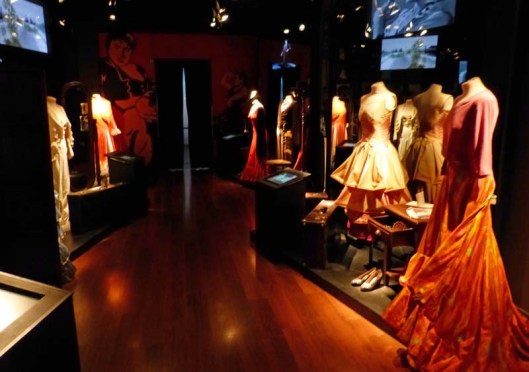 I had never previously fully appreciated the skill and athleticism required of flamenco dancers.  Further rooms went into greater detail which was lost on me, but nevertheless gave great pleasure to the eye.  On the top floor was a temporary exhibition of beautiful sculptures by Kay Woo. 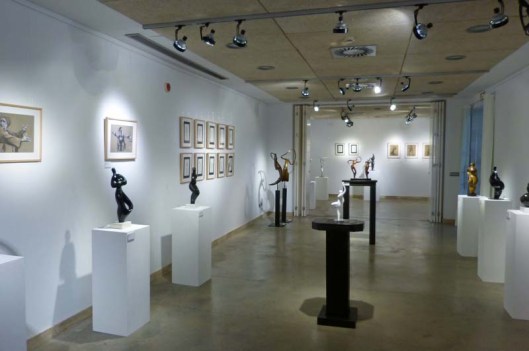 I loved them, and the pieces were so reasonable that I could have been tempted, but for various practical considerations.  I particularly loved these two, about 15 inches high. 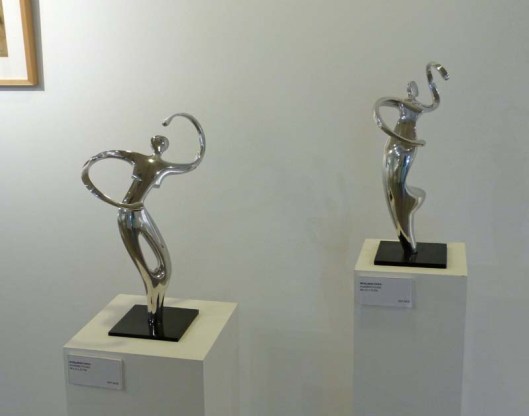 Finally there was, in the basement, a room of drawings by Pedro Moreno, costume designer. 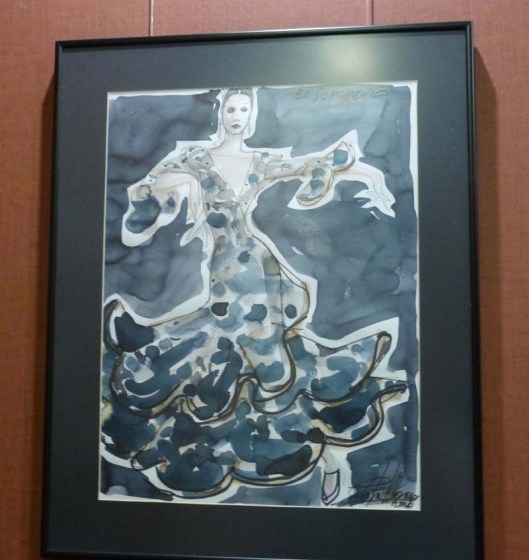 I now understood why there were so many shops in the immediate vicinity selling very beautiful and very expensive flamenco dresses.  (I had been near the window of one of them the previous evening as I ate my tapas.)

With my cathedral entry ticket had come a free entry to San Salvador, the church on my hotel doorstep as it were, so I took advantage of that (while paying for an audioguide).  This was the second largest church in Seville, but I have to say that rococo is just not my thing.  Entertaining, but to my eyes not aesthetically pleasing, far too fussy – many no doubt would disagree. 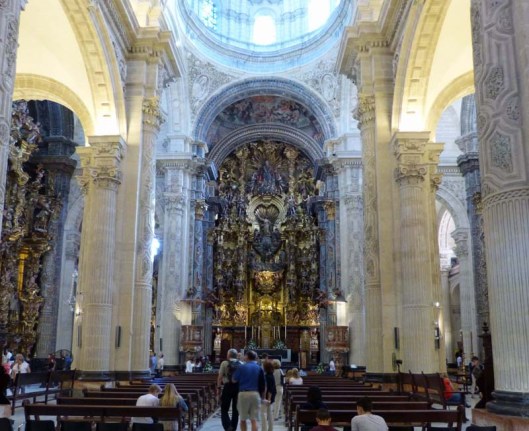 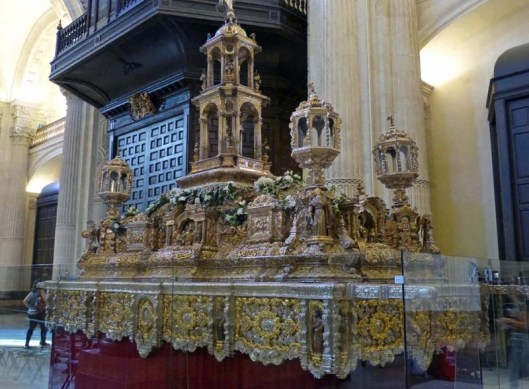 I could find nothing to tell me what this was – a processional item? It appeared to be of gilded solid silver. 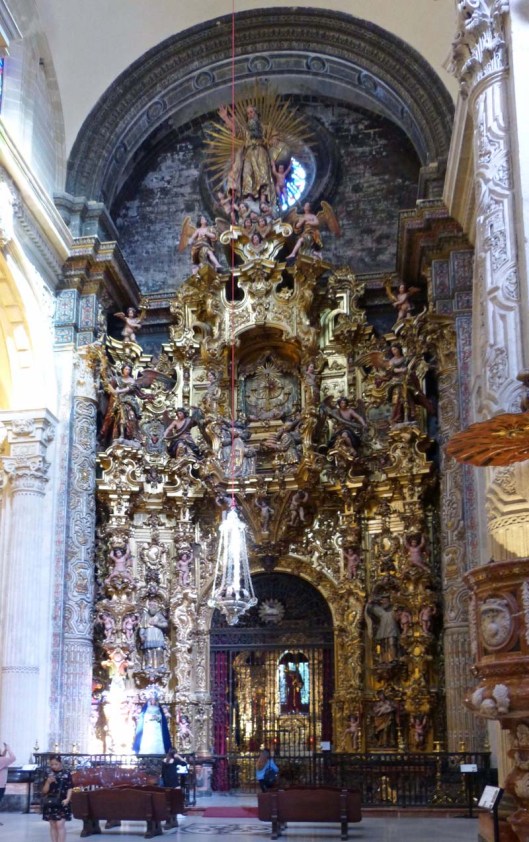 All round the church were altarpieces of various degrees of ornamentation 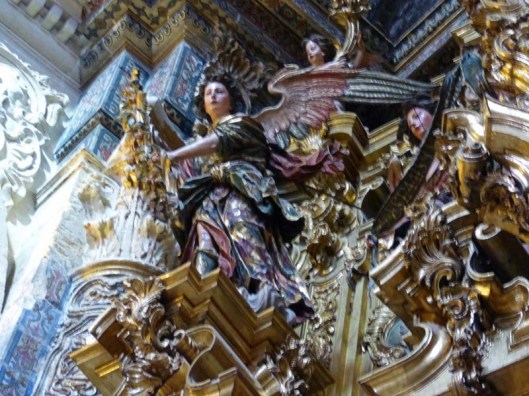 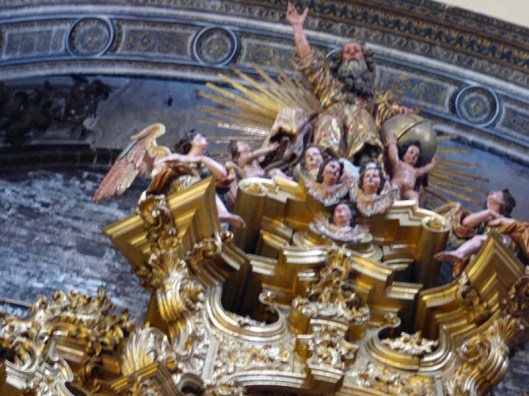 I did like this more restrained and classical pulpit, one of a matching pair,and the soundboard above it, which made me think of Wedgwood jasperware. 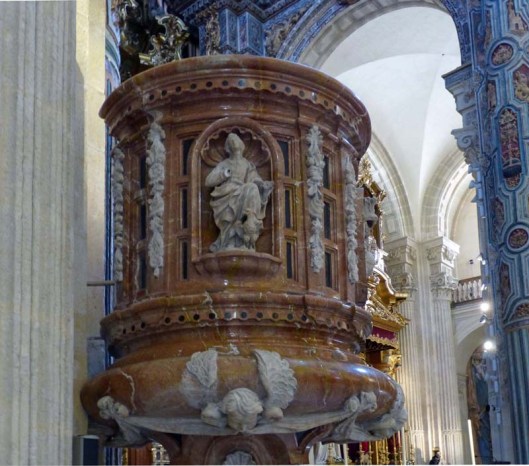 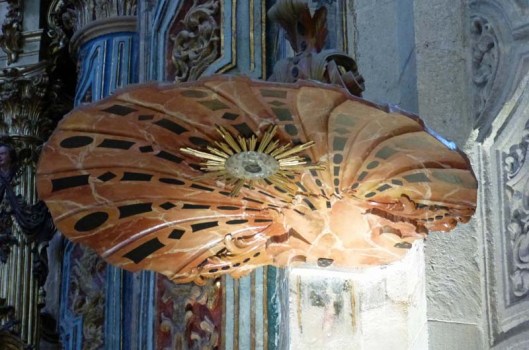 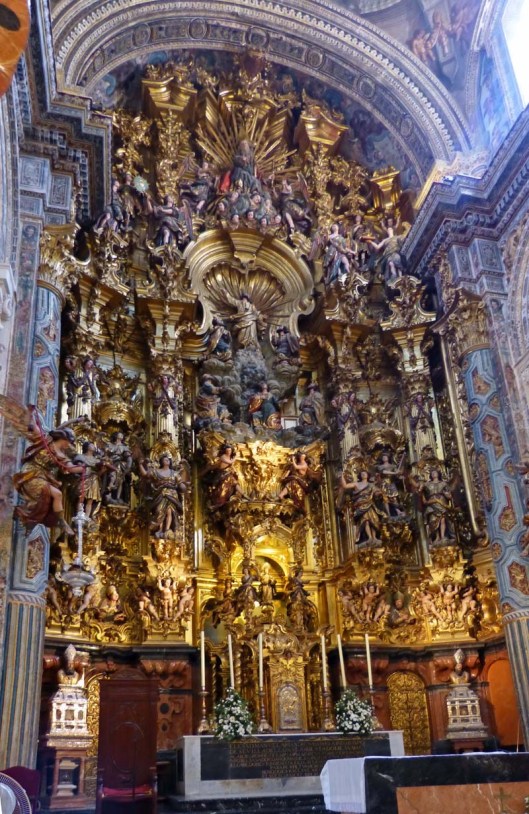 This main altarpiece was described as being the ultimate expression of rococo art as interpreted in lower Andalucia. 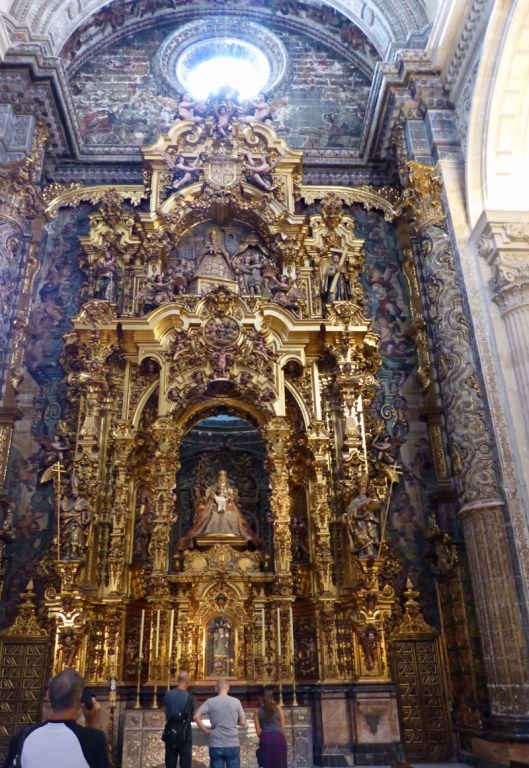 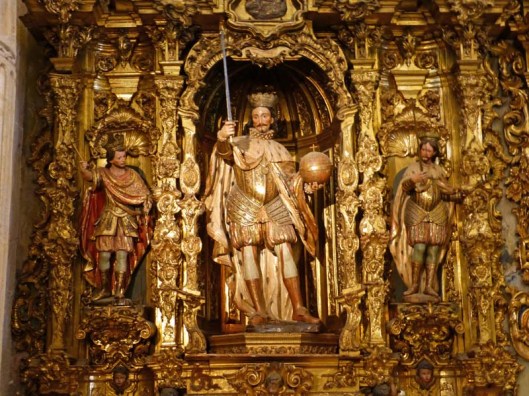 After these two visits I was gasping for a drink, and I wandered on northwards into the Macarena district.  Sadly it would not have been possible to go up to the top of the Metropol Parasol, as it does not open on Mondays, but I found a simple bar, serving tapas as well, and partook there, looking on at these Roman columns, in the Alameda de Hércules, a boulevard originally laid out in 1574 on drained marshland.  It fell on hard, even disreputable, times, but is now, after very recent redevelopment by the authorities, becoming a pleasant place once more. 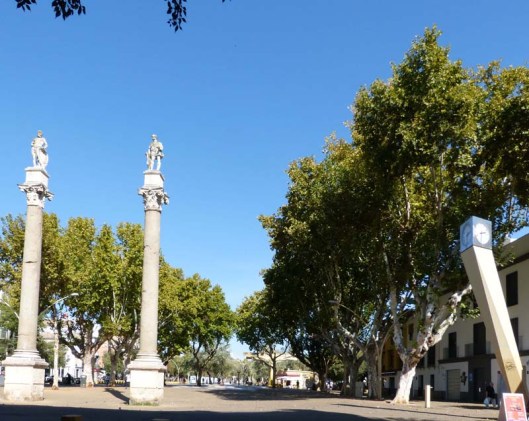 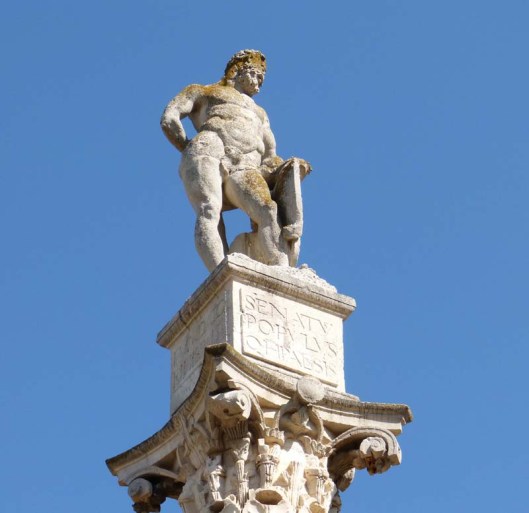 The columns, with weathered statues  of Julius Caesar and Hercules on top, were originally elsewhere in Seville, and three others remain there.

It soon had to make my way back to the hotel to pick up my luggage, but I had time to stop at the Italian icecream shop, open this time, and to sit in the Plaza Nueva to consume my choice there, and then to check on how I could buy a ticket for the tram which I was to take shortly. 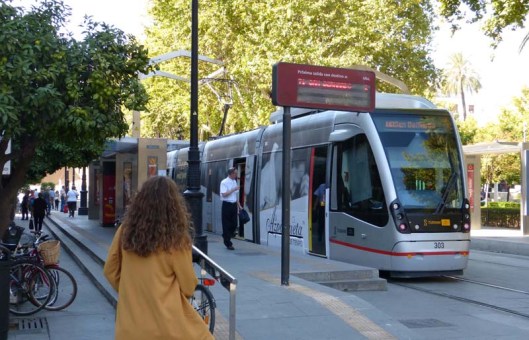 That all went very smoothly, including a ticket inspection, but, 5 minutes into the 15-minute journey, I had a call from Naturetrek in the UK.  “Sorry, the flight you are going to meet is delayed by two hours.”  But as I was by now on my way to the airport, and had luggage with me, I decided to continue to where I would pick up the airport bus, at San Barnardo. There I received kind and unsolicited guidance from locals who, seeing my suitcase, told me this was the airport bus coming just now.

At the airport I met up with Naturetrek guides/naturalists Niki and Simon, who live in southern Spain, right by the Straits of Gibraltar, and who are, in their own words, bird migration geeks. The time passed quickly until my companions for the next five days came though the arrivals gate, with quite a tale to tell about the travails of their flight.  Soon forgotten though as we made our way to El Rocio, on the edge of the Doñana National Park, a most extraordinary small town.