Madeira Revisited 7. Last full day. By the way, my memory was playing me up.  It wasn’t on Day 5 but today that we went to Cabo Girâo, at 580metres/1900 feet the highest cliff in ‘Europe’. Here’s the view eastwards, towards Funchal, from the glass platform.

From there, we continued along the coast to the west, and then turned inland to another upland, very different from what we had seen, a plateau heathland, once more above the clouds. 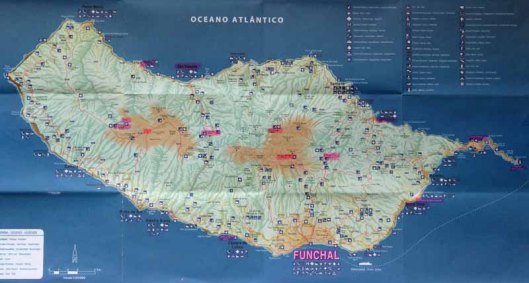 They were building a huge reservoir where we made a brief stop (in the middle of the left-hand brown area on the map), but we were there to see more of this magnificent native plant, called Pride of Madeira, echium candicans.

I’d liked it so much the first time I saw it, on the first day, that I’d bought a t-shirt.  The flowerheads really are this big.

The label says it was made in Madeira.

Next we descended in our minibuses to a place called Rabaçal, (on the left-hand edge of the brown bit on the map), within the clouds. Indeed it was difficult to tell whether we were in mist or whether it was actually raining.  Fortunately, the longest part of our subsequent walk was downwards on a long, quite narrow, very quiet, wind-y road, and out of the clouds. 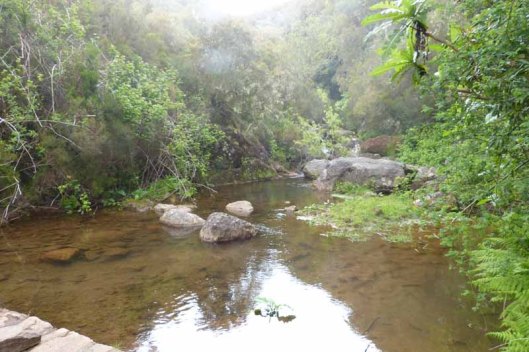 Good to see this natural stream, after all those levadas 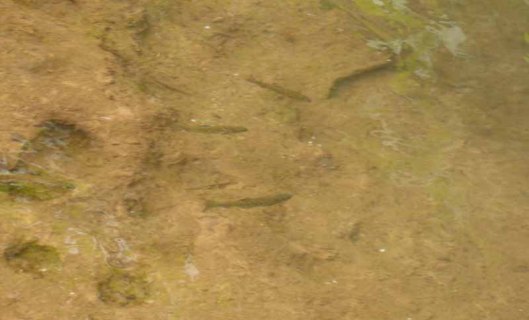 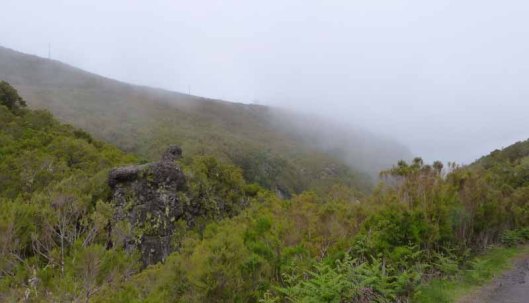 We were all spread out, and, uncertain as to whether we should continue on the road or take this steep path, Christine, Richard, David and I stood here for a long while nattering. It turned out we could have taken either.

When the tarmac came to an end, we continued on a further steep path downwards, but this fortunately became a flat levada walk shortly afterwards.

Madeiran chaffinches were everywhere, and very friendly. I have resisted posting photos of them every day.  This one, like many, had a deformity on its feet.

At the end – a place called Risco – there was a long, but narrow, waterfall, to which I found it difficult to do justice in photos. 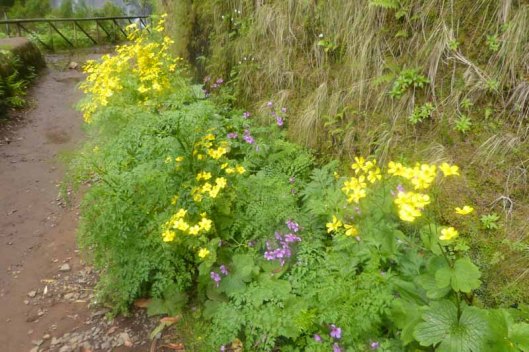 The walk was a there and back one again.

There was no doubt a fantastic view behind the cloud…

It was with great pleasure that most of us, when we got back to the tarmac road, took a little bus provided by the local authority (at 3 euros each) to get back to our own minibuses.  All this took much longer than anticipated, and it was rather late when we had our lunch in what was no doubt a beautiful spot on the heath, picnic tables and all, but sadly we were once more in the chill and damp of cloudland.

Our final stop of the day was in what was formally designated ‘cloud forest’ (warmer here because more sheltered), where we were able to see how plants just absorbed water from the atmosphere, and indeed were growing on each other.

Back at the hotel, it was time to pack, then go down one last time to a restaurant near the seafront, and climb back again.

The following morning, it was time to say good bye to the hotel (the Residencial Pina) and its friendly staff. 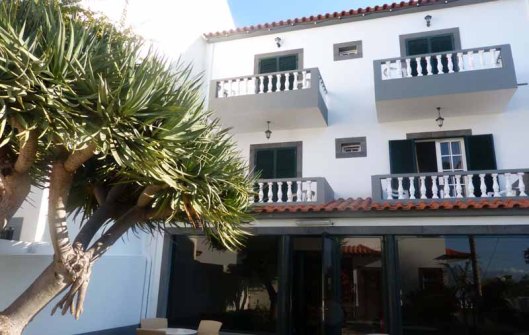 My room right in the middle, over the breakfast room. That’s a dragon tree.

That had come into harbour overnight

When I visited Madeira in November 2016 on a regular tourist holiday, which I did much enjoy, I had sensed that there must be wilder areas, where it was possible to look around without the view being interrupted by rooves and cables.  This holiday proved to me that this was true, and showed me just how beautiful deeper Madeira is.  There are still some things I would like to explore there…

Madeira Revisited 2.  Wednesday 6th June. On my previous visit we had covered a lot of ground, and it was inevitable that this time I would repeat some places.  But this was no problem, as the nature and extent of the visits were very different. On this and four of the following five days (the fifth was free) our focus was nature, and since there seemed sadly not to be many butterflies or a great variety of birds, it was plants and their flowers which were the main interest, so it was a good thing that our principal guide, Martin, was a superb botanist. That said, I had not a hope of retaining the English names – where there were such – let alone the Latin ones which  tripped off his tongue, so I just enjoyed myself taking hundreds – literally – of photos, from which to choose a few for here, of the plants and the views. (Many of the species had ‘maderensis’, Madeiran, in their names.)

Each morning the minibuses picked us up at 9 a.m. for the day’s touring. I had indeed been to our first stop, the Pico do Arieiro, pretty well due north of Funchal, halfway between north and south coasts. As it is 1818 metres, nearly 6000 feet, high, the third highest peak on the island, I was pleased the buses took us all the way there, and also that, as before, while we had driven through cloud, we were well above it by now, and indeed this time it cleared while we were there. Previously, we had hung around the top by the radar station and the café/shop centre, admiring the wonderful views.  This time we walked among them along a ridge for an hour or so, learning about the plants. 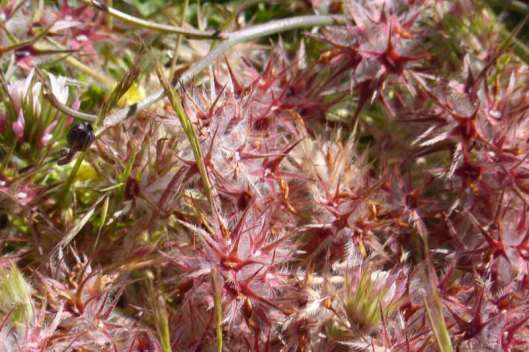 All the rock is of volcanic origin of course

Our next stop, nearby, was also familiar, Ribeiro Frio, but this time, whereas it had been cold and misty before, the sun was out for most of the time, but not too hot, ideal for walking.

This fungus, Martin explained, is pretty rare because it will only grow on this particular tree, which is endemic to Madeira.

Indeed, on the previous occasion I had noticed that there were ‘levada’ walks from that place, known for its trout farms, and I was pleased to have the opportunity this time to follow them up. We did two, one before our picnic lunch and one after. The first 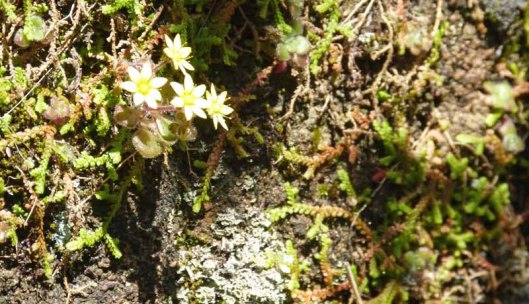 took us to a viewpoint at Balcóes.  I took all these following photos within ten minutes of each other and from the same spot! 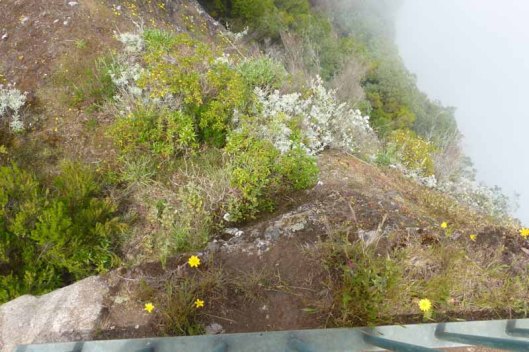 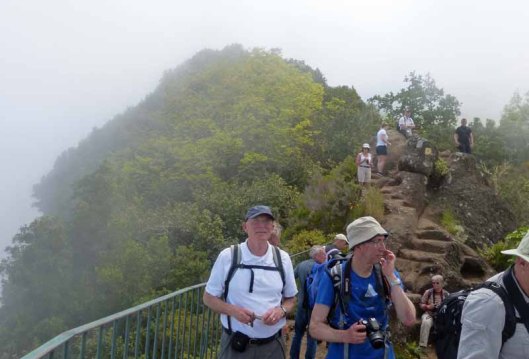 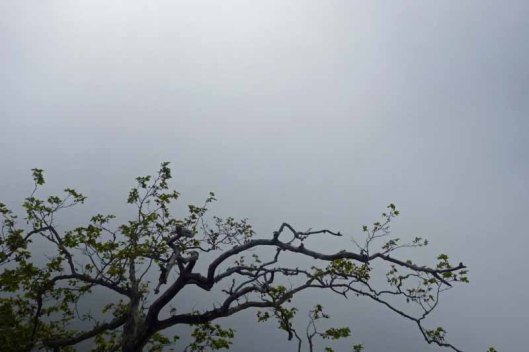 Looking down and leaning sideways

After lunch, a little way from Balcóes,

I struck out on my own, as did most people, leaving the very keen botanists with Martin, along a broad levada walk, again from Ribeiro Frio.  Levadas are watercourses built from the 15th to the 20th centuries to transfer water from the much wetter north of the island to the dry south. They now also provide walking paths, some narrow, crumbling and dangerous, some very broad, with only imperceptible inclines. 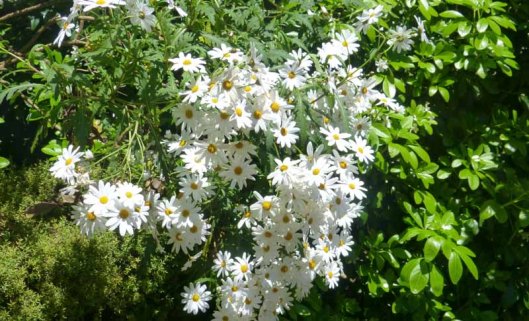 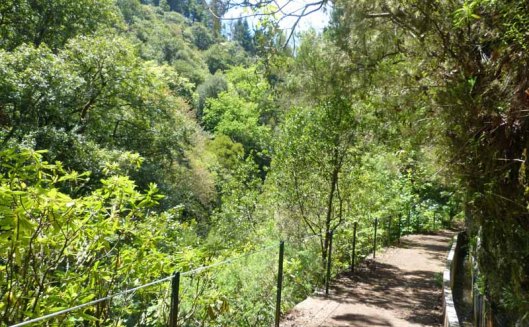 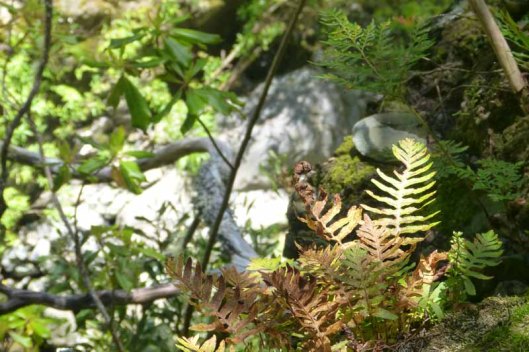 A soft drink at the end at a café back in Ribeiro Frio was well-deserved, and provided us with entertainment from Madeiran chaffinches like this one (which has ‘maderensis’ in its Latin name).

After a rest at out hotel, we walked down to town for a meal in one of the dozens of restaurants in the Rua de Santa Maria, where you take your liberty in your hands if you haven’t already a booking (we had) or at least a target firmly in mind!