Continuing my ’90-minute’ walk in Seville. After those shops (previous post) the guidebook said that I would come across the Iglesia de la Magdalena, built in 1709 on the site of an earlier Moorish mosque. So I just walked straight past this of course.

But it turned out to be the side entrance. Despite the fact that a mass was in progress, I was encouraged to walk around at the back and sides of the church by a member of the congregation standing by to greet visitors. The building proved to be anything but plain on the inside.

A reminder of Seville’s naval triumphs

And when, continuing on my route, I went round to the front of the church, it was more recognisable as such. 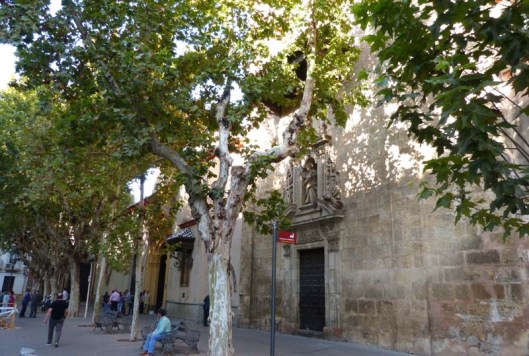 I went on to the Triana district, the other side of the Guadalquivir river, over the Puente (bridge) de Isabel II, looking north 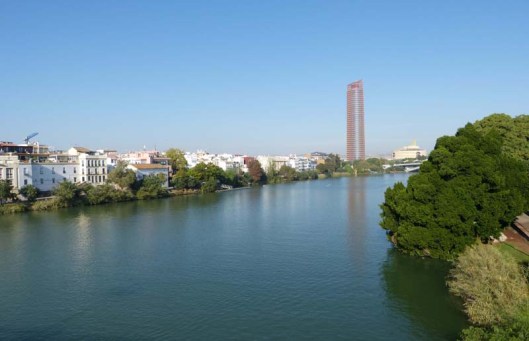 My route then took me by many ceramic shops. 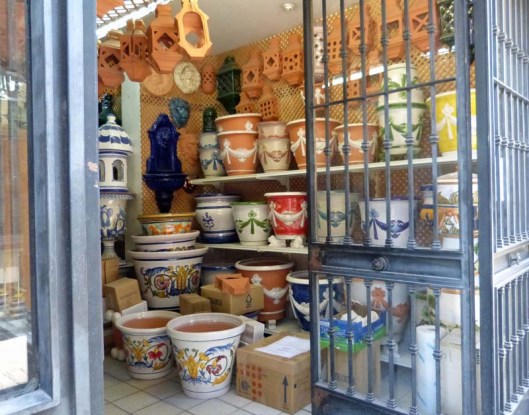 I was beginning to want a drink and a sit, and I was delighted to find a quiet square, that of the 13th century Iglesia Santa Ana, Seville’s oldest church.

Still on the Triana side of the river, I continued along it for a short while, with a view of the Torre d’Oro. 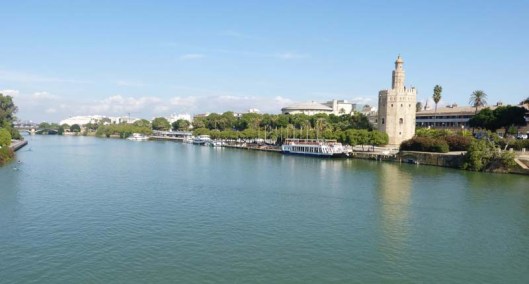 Then back over the Guadalquivir River by the Puente de San Telmo, and into the Calle San Fernando, with a sighting of the Hotel Alfonso XIII, built between 1916 and 1928 for visitors to the Ibero-American Exposition, meant to boost the Andalucian economy, but sadly co-inciding with the Wall Street crash. 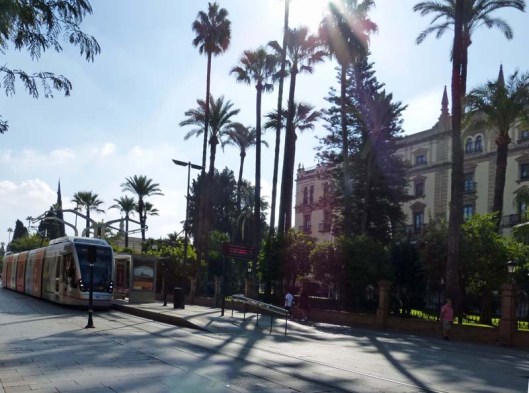 Ooh, it’s the University of Seville. Open to the public, so there’s another deviation from the walk. 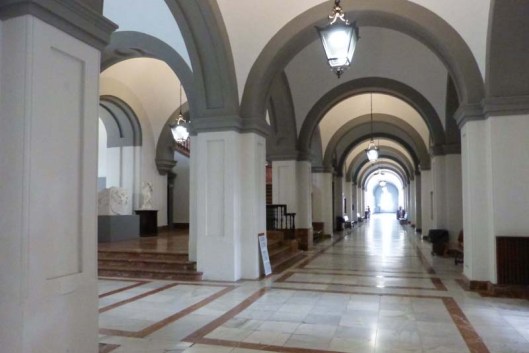 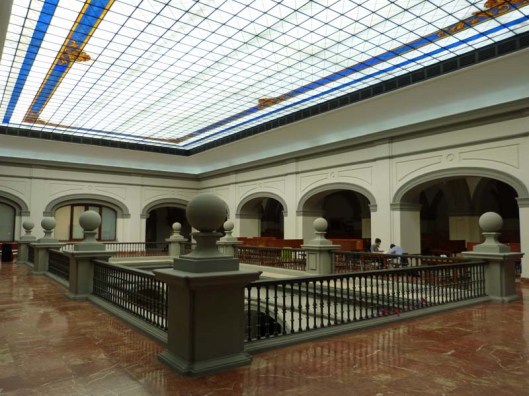 First floor – and here, it would appear, there are actually some students

Pretty impressive for a university.  But even more impressive when you know it was a tobacco factory before that. Not just any old tobacco factory, but the Royal Tobacco Factory, employing 3000 women. You know, the one employing Mérimée and Bizet’s ‘Carmen’.  There were signs over doorways of former occupation, amongst them foremen, loos (still in use as such, though out of order this day) and stores.

Once more outside, I was still walking alongside the huge ex-tobacco factory,

and was level with its chapel, when I noticed a wedding party arriving, and managed to get a photo through the grill as the bride emerged from the car. 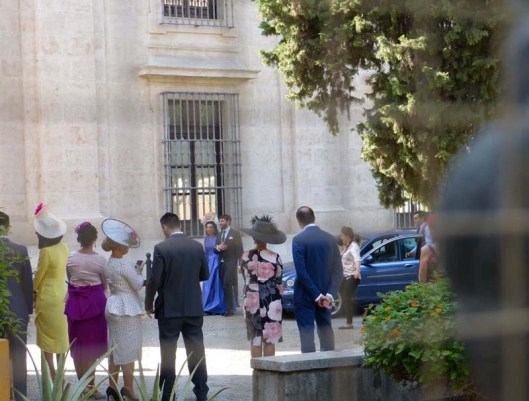 Into the Jardines de Murillo, named for the painter, 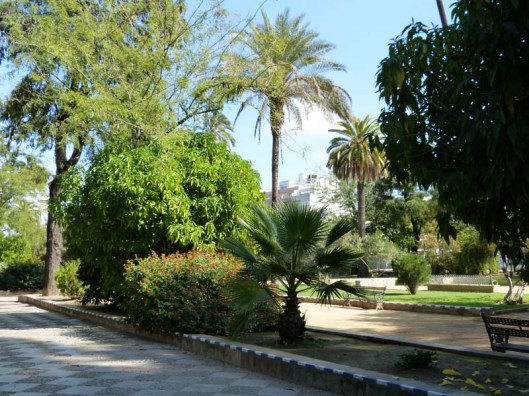 where I sat to eat an apple, all the lunch I needed after the very full breakfast and in the great heat. Looking at my map, I realised that I was not far from the Archivo de Indias. I had seen advertised a temporary exhibition there which had really caught my eye. Put the words ‘maps’ and ‘river’ together, and they are a magnet to me. So I diverted,

On my way I noticed a tour guide pointing out this garden.  No idea what it was. 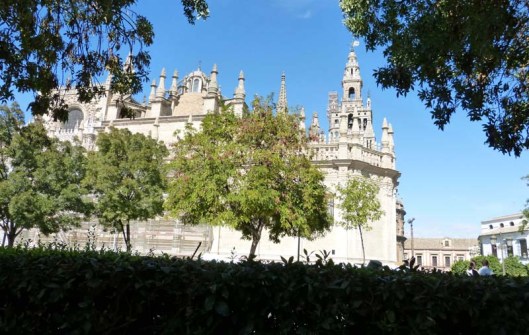 A first sighting of the Cathedral

A first sighting of the Real Alcazar, (‘Royal Fortress’)

and serendipitous further diversion took me past – or rather into – a nougat shop where I bought a large bar of the softer version, with tropical fruits, with the thought that I might well return.

(The next post will be exclusively concerned with the map and river exhibition and the building in which it was housed.)

Afterwards, it was time for another sit-down, and a drink, of fizzy water this time. And a photo of a sleeping cat which didn’t move the whole of the time I was there. 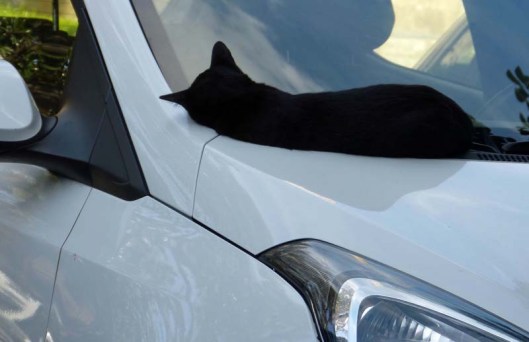 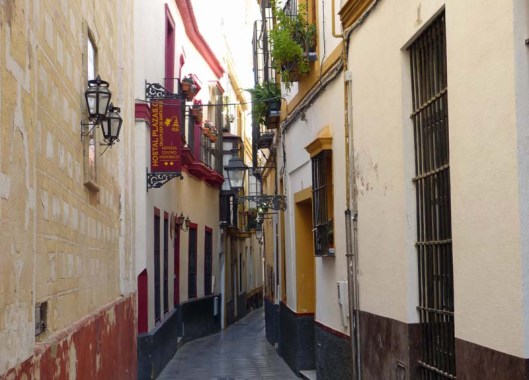 Back to my appointed route

A young woman had been idly stroking this cat in a quiet square, as she read a book. 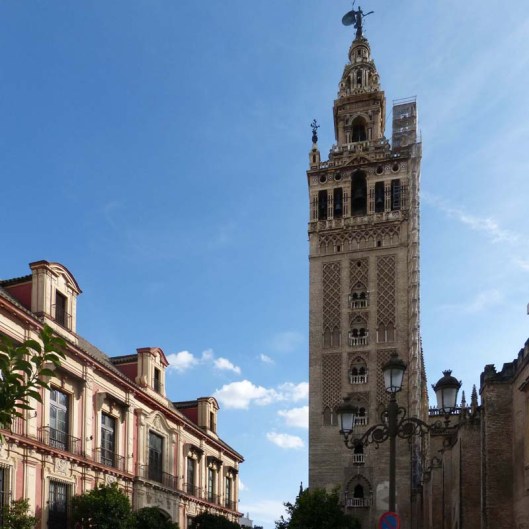 And back to my hotel, via the Plaza de San Francisco and the Ayuntamiento once more.

Too exhausted to explore more widely, I just took tapas in the hotel’s own restaurant later on that evening.