Less than four weeks from my previous visit, I was up in London again, this time the principal object of my visit being to attend two days of the ATP (that is, mens’) world tennis finals.  I had been for one day (which means two session) in 2017, but failed to see Roger Federer. So this time I booked for the last two consecutive days of the round robin stage, Thursday and Friday.  All that RF had previously to do was to qualify in the top eight ranked in the world, which of course he did easily.  And keep fit, which he also did.

That said, he had had played abysmally on the Sunday in his first round robin match, and lost to the bottom seed of the eight, Kei Nishikori.  I started to worry about my investment in the expensive tickets.  However, he did better and won his match on Tuesday against Dominic Thiem on Tuesday, leaving himself with a chance of reaching the semi-finals. Even if he won his round robin match against Anderson (who had stormed through his first two matches) on Thursday, it could still depend on how the remaining match, Nishikori/Thiem, worked out.

Approaching the O2 in Greenwich, London

Before I took my seat in the front row of level 4 on Thursday, I was offered an upgrade to level 1. (Levels 2 and 3 are hospitality boxes, from which, annoyingly, more party noise than was acceptable sometimes emerged.  The umpire tried his best to reduce it, but of course the culprits were not listening.) I declined the upgrade for the first match, a doubles involving Jamie Murray and Bruno Soares, but was fortunate still to be able to change before the singles match of that first session, as I preferred not to have my nose assailed by the fatty fast-food smell wafting in from the concourse surrounding this level.

From the front row of Level 4, waiting for it all to start 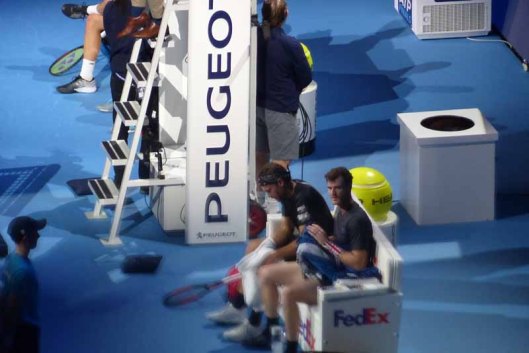 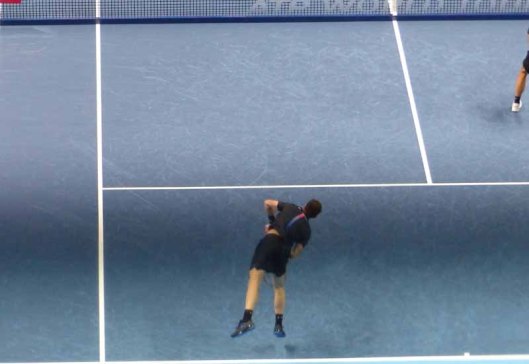 The singles match was between Nishikori and Thiem.  The fact that the latter won meant that Federer only had to win one set in his against Anderson later in the day to qualify for the semi-finals.  Or so I was informed by a neighbour who understood the round robin scoring system much better than I did.

View from my Level 1 seat.  The ring of lights goes off during play!

Up there, in the front row, was where I had been for the first match 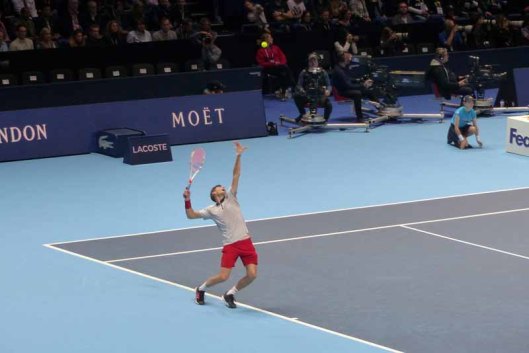 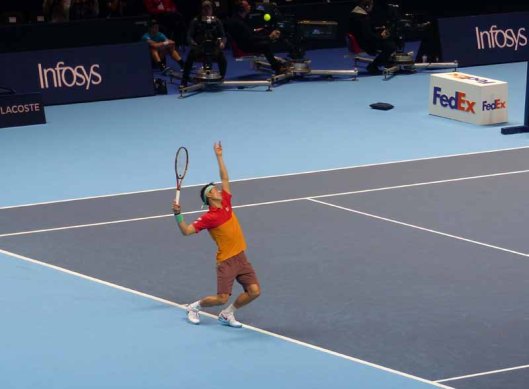 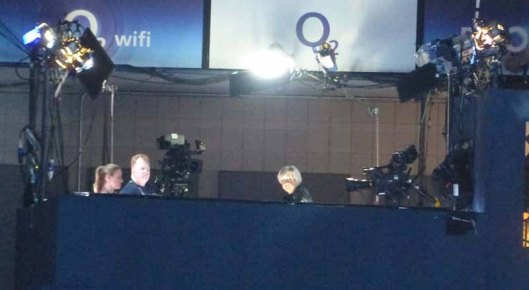 The evening session started with a match involving two Frenchmen, Pierre-Hugues Herbert and Nicolas Mahut, seeded eighth of eight pairs, but who made it through eventually to the finals. Then came the Federer/Anderson match, the one I had paid all that money for eight matches sessions to be sure of seeing.  I took an awful lot of photos of Federer.  Those here is just a small selection from the match… 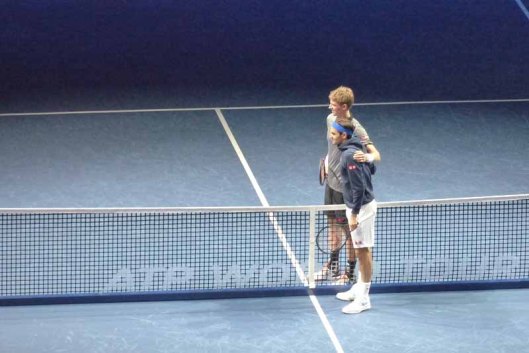 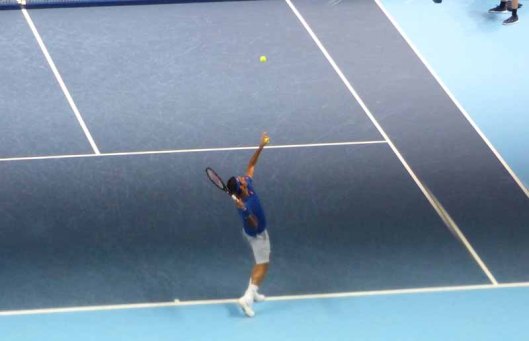 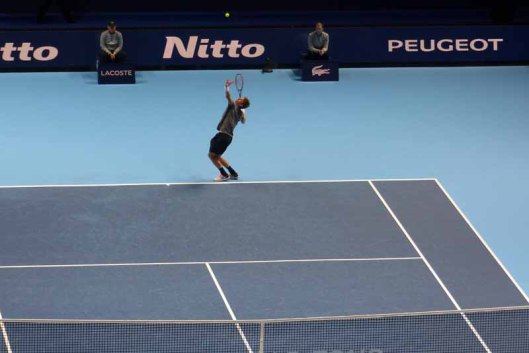 You could almost hear the sigh of relief round the vast arena as Federer won his first set against Anderson, fairly convincingly. 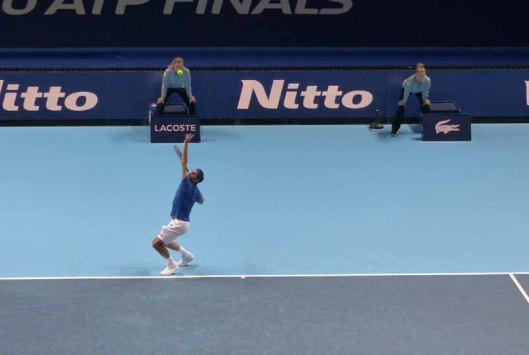 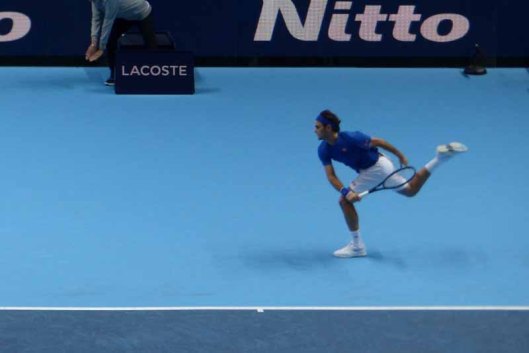 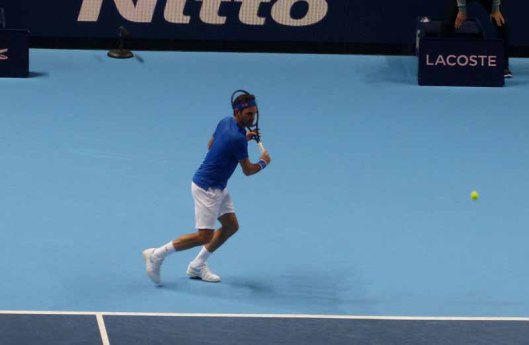 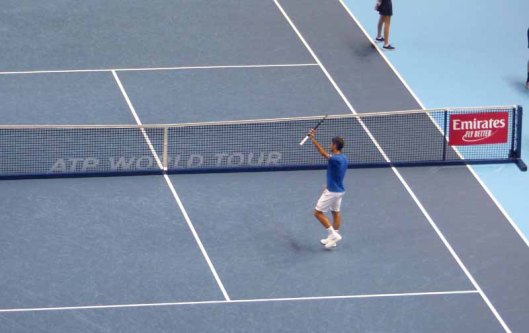 Acknowledging the crowd after winning in two sets

Not only was Federer through to the semi-finals, along with Anderson, the scoring system meant that he would be the top-ranked of the two.

Before moving on a brief account of the two Friday sessions, this is what you see, accompanied by a great deal of noise from the amplification system, at various points in the proceedings. 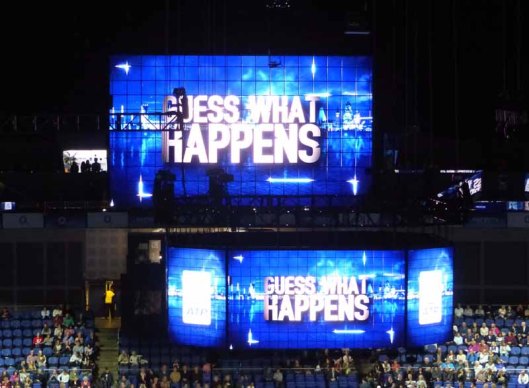 Entertainment between the games 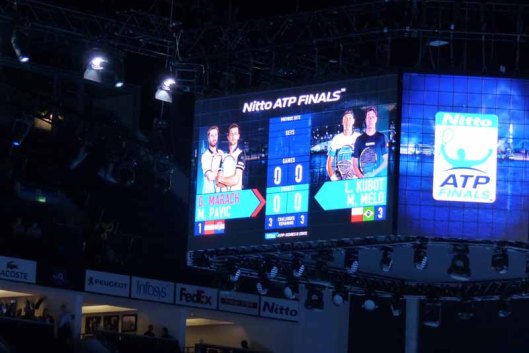 Measuring crowd noise and egging it on 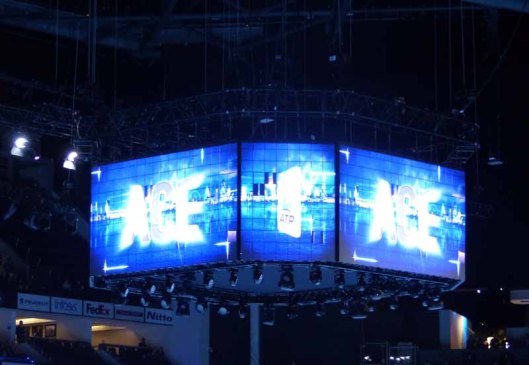 Also ‘set point’, ‘match point’,  and, in doubles matches, ‘deciding point’ at deuce, all accompanied by a thunder clap.

On Friday I was again able to have an upgrade for the first session, but not for the second. 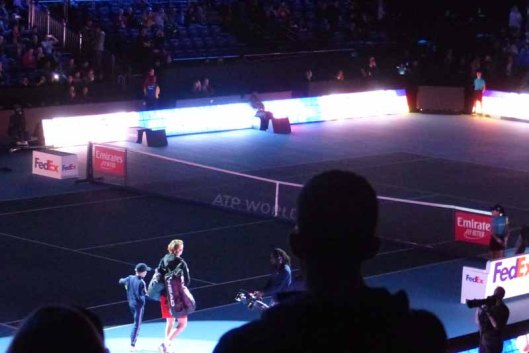 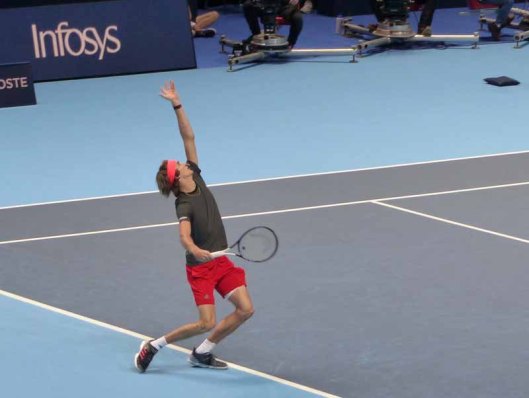 I was back up in Level 4 for the evening session.  The singles match was between Marin Cilic and Novak Djokovic 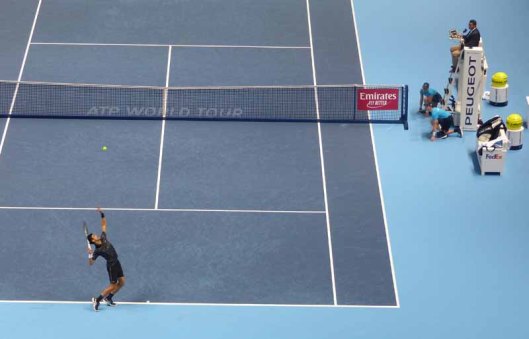 Being on the spot, one is more aware of what else is going on around the court, and I was just full of admiration for the ball kids. (Sorry, that is what they are called these days.)

Spotlights on them as they arrive

I was amused to see this ‘ball kid cam‘ recording on Facebook later.

So I have now achieved my ambition of seeing the GOAT, Roger Federer, in the flesh.  I shan’t book for these world finals again, though we are privileged to have them in London for at least two more years, on top of the ten we have had them already.  But I shall buy myself an annual subscription to Tennis TV to be able to watch them all and many other matches in the comfort of my armchair.  Which is how my host, Mary, and I watched the Federer/Zverev semi-final on the BBC the next day, sadly seeing the 37-year-old Roger go out to the 21-year-old, a win well merited, though it was a narrow thing.

Djokovic not surprisingly beat Anderson 6-2,6-2 later in the day, while I was travelling home, and I am expecting, but not wanting, him to beat Zverev later on today in the final.

USA 2018 (1). The flight out. Here beginneth a series of many blogs on my latest odyssey: to cousin Geoff and family in Bedford, New Hampshire, on the US’s eastern seaboard; Grand Teton and Yellowstone National Parks, (3/4 of the way across the country); and to niece Karina, in Los Angeles County. I was away for a fortnight in total.  As usual, the posts will contain many photos and little text – with perhaps the exception of this first one.

Monday 12th. Having got up at 2.15 am, I arrived at 4.00 am at the super-duper new Silver Line car parking terminal, just a 4-minute shuttle bus from Bristol Airport.  A 25 minute delay before take-off because of weather problems at Schifhol Airport, Amsterdam, was nothing compared to subsequent problems there. ‘SSSS’ on my ticket meant I had been selected for intensive security screening at the Durch airport before boarding my KLM flight to Boston, Massachusetts.  A trainee on her first day ‘did’ me, under supervision, for about 20 minutes, (though subsequent internet research indicated that the investigation could have been much more thorough!)  Boarding was at a normal time, and the pilot announced it would be a long flight because of strong head winds.

It started hailing. Whether connected or not, the announced take off time steadily retreated, to one hour late.
The plane started taxi-ing, then stopped after a while. The pilot announced that we must be de-iced. I was amused to observe a ballet of many de-icers, four per plane. 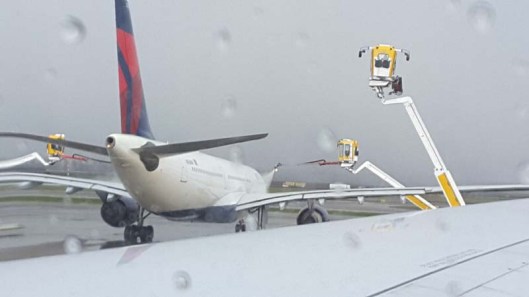 Who are you staring at then?

At last we were on a stand – and our own ballet dancers retreated before they’d even begun. The pilot explained that this was because they must shut down, and go under cover, because of lightning in the atmosphere.
We had no idea how long we’d have to wait. I consoled myself with the thought that Roger Federer was only a little way away, in Rotterdam, where he was due to play his opening match in the eponymous ATP tournament later in the day. (He went on to win the final the following Sunday, and return to the world number one spot, breaking a number of records in the process.)

The de-icers came out again, the sun accompanying them. This time I observed the dance at close quarters, involving two types of spray, the second of which left a greenish hue. 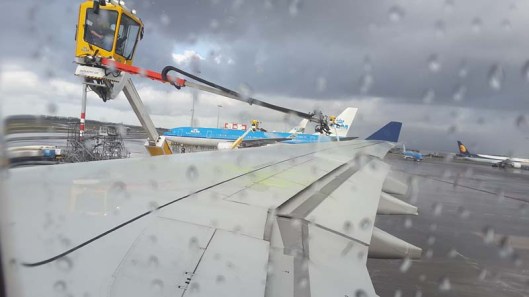 As we moved off, two hours after the scheduled departure time, the captain said it didn’t often happen that he had a complete set of circumstances for the very first time. And not to worry if we saw a pilot wandering around the cabin as there were two of them on board.

Nicole, Geoff’s wife, had been tracking the timing of the plane, so had not been hanging around for hours, but because of the delay we hit the rush hour, and had to go direct to their son’s school to pick him up. A lovely crock-cooked supper took just a couple of minutes to serve, and then it was off to bed, 23 hours after getting up.

Many more photos, much less talk for the next post.