Seville, immediate surroundings.  I have not long been back from a trip to Andalucia, staying for three nights in central Seville, and then joining ten other people on an organised wildlife trip, hoping to see lynx in two different areas of the region.

Arriving in Seville in the late afternoon, I walked from the Plaza des Armas, where the airport bus had dropped me, for the kilometre or so to my hotel, Las Casas de los Mercaderes***. After unpacking and a suitable and much-needed rest, I went out for an exploratory wander. Right nearby was the Plaza Salvador and its Iglesia, which I learned later was the second largest church in the city, and a favourite for weddings.

Lots of exotic shops, but I was surprised to see these hookahs.

In the Plaza de la Encarnacion, where this huge tree impressed me,

I caught my first glimpse of the Metropol Parasol, the world’s largest wooden structure, and drew nearer.

I added a trip to the top of it to my list of possible things to do, but at this point moved on. Shortly afterwards, on a main shopping street on a Friday evening, I was astonished to see this orderly queue.

With even the British losing the habit, I thought the courtesy was extinct.  But I was back there on Monday morning, and saw that the bus stop queue was even more orderly, in single file.

My wander continued. I was getting hungry, and eventually settled at the Robles Laredo, in the Plaza de San Francisco, with the Ayuntamiento (town hall) to my right, and La Giralda, the Cathedral’s tower, in the left distance, which I was to climb on Sunday.

I’m not usually one for taking photos of my food, but how could I not when it looked as good as this?

Tosta gratinada de gambas con alioli. You’ll can almost smell the garlic. (I did resist taking a photo of the amazing sweet…)

A little continued wandering included some street singers, (it was now too dark to capture them on ‘film’), and the discovery, in the Plaza Nueva, of how I could avoid the lengthy walk back to catch the airport bus on Monday.

I had adored my hotel room from the moment I stepped inside it, not least because of its natural light to both bedroom and bathroom, but also because it had its own character. The next day, Saturday, I took photos on my way down to breakfast – which was copious. 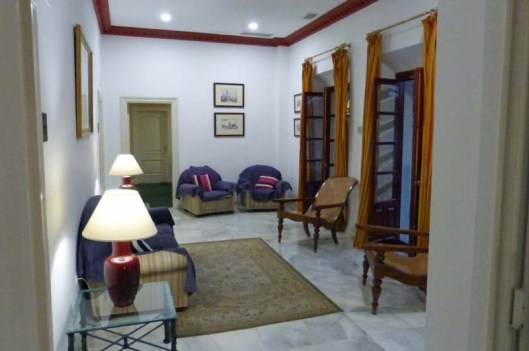 The breakfast room, seen from the first floor

The roof to that central patio

This is the outside of the hotel, taken early evening the same day. 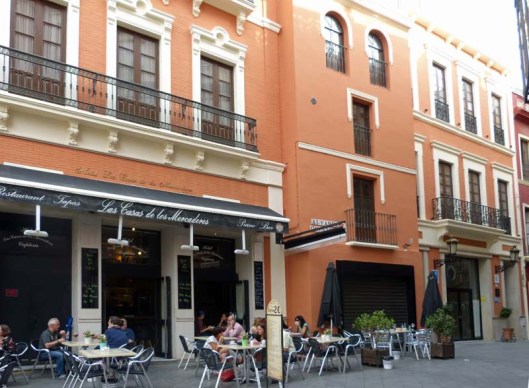 and this the pedestrian road (calle) in which it was located. 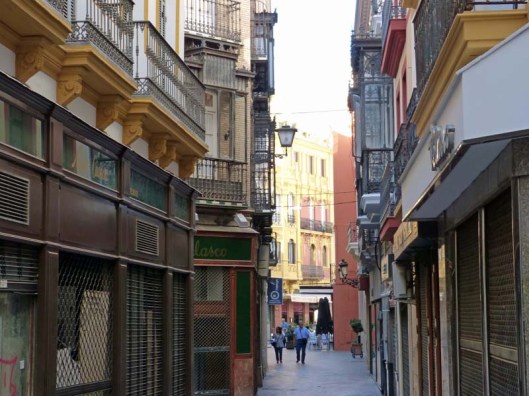 To explore Seville, I used a guidebook which proved to be excellent, the DK Eyewitness Travel, ‘Seville and Andalusia’.  Earlier perusing had shown me there was no point in making detailed plans, but that after the general wander of Friday evening, their suggested 90-minute two-mile walk seemed to be a good way to continue. In fact I got back to my hotel seven hours later, very happy with my day. 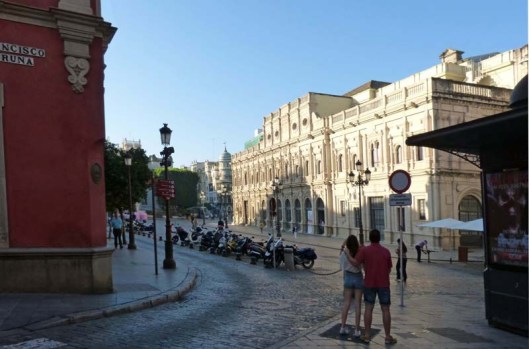 The Ayuntamiento in the morning light.

The first few minutes of the walk took me past many more picturesque shops. Here are some of them. 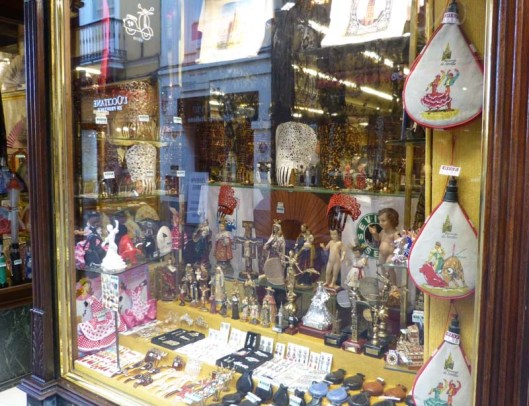 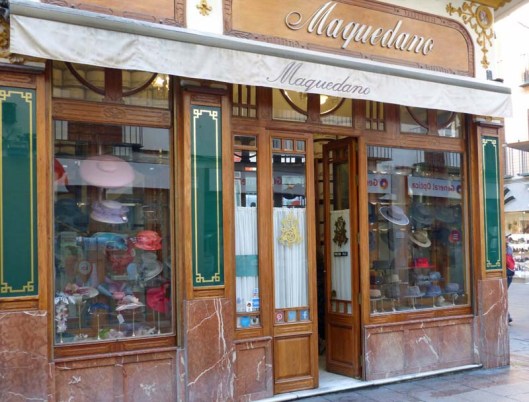 I’m not sure I like the special spice for stewed bull.  I certainly had no inclination to go and visit the bullring. 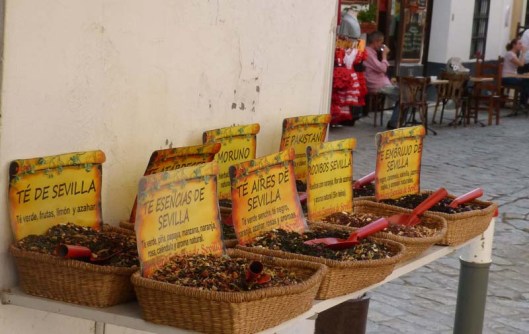 The next post will cover the rest of my ’90-minute’ walk.